Co-founded by three IIT Madras classmates - Narayan, Kumar Krishnasami and Joe Varghese, all US-based now - Unmetric, with 70-plus mostly Chennai-based employees, fuses its 100 servers on Amazon Cloud to sift through the web and pull out data on 15,000 br
N. Madhavan | Print Edition: April 13, 2014 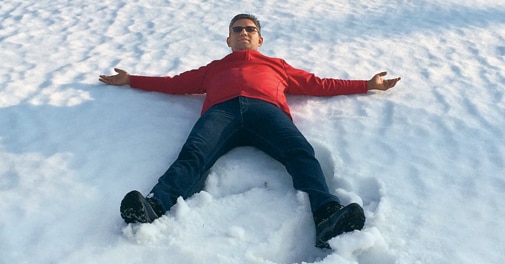 Co-founder Lakshmanan Narayan at Basking Ridge, New Jersey, where he is based

'Markets are conversations.' It is with this statement that Lakshmanan Narayan, Co-founder and CEO of Unmetric - a social media benchmarking start-up - typically begins all his presentations. The statement - the first of 95 theses in the book The Cluetrain Manifesto - has gained more relevance with the emergence of social media.

Unmetric was founded by three IIT-Madras classmates - Narayan, Kumar Krishnasami and Joe Varghese, who are all based in the US now. The start-up, with more than 70 employees who are based mostly in Chennai, fuses its 100 servers on Amazon Cloud to sift through the web and pull out data on 15,000 brands across 30 different sectors. This information is not simply collated and shared, but interpreted for customers.

"Social media has turned the communication brands engage in from a monologue to a conversation. Unmetric provides them the intelligence needed to be a lot smarter and embrace the conversation economy," says Narayan. Adds Joe Colacurcio, Research Manager at Chicago-based marketing agency Zocalo group: "Unmetric gives us the intelligence to know what our brands' followers are looking for, and how we can best develop, curate, and deliver that content for them."

Unmetric was first launched in India in 2012, and then in the US. It has an interesting array of customers that include restaurant chain Subway, automakers Volvo, Cadillac and Toyota as well as networking equipment maker Cisco. Its clients in India include telecom company Aircel, Cafe Coffee Day, ITC Hotels and hospitality firm Club Mahindra. The company's business model is based on providing software as a service on an annual subscription basis.

"You subscribe to our service. We offer you access to how various brands are performing on social media. Various plans exist depending on the number of brands you want to track," says Narayan, without specifying the fee it charges.

Unmetric does not provide basic information such as the number of visits to a client's social media page, the bounce rate or the quantum of unique visitors, but three dimensions of competitive intelligence.

Channel Intelligence offers interesting insights, such as, say, the average response time by US airlines on Twitter - 12 minutes. Airlines can compare this data with their own response times. Each brand, on average, does 30 Facebook posts, 100 tweets, posts 12 pictures on Instagram and uploads three videos on YouTube monthly. Content Intelligence tells clients how these are received. A brand also typically launches at least six social media campaigns every month and Campaign Intelligence helps unearth their effectiveness.

"None of Unmetric's competitors offer this type of service. They offer, at best, some elements of what we do," says Narayan.

Unmetric has had two rounds of funding. Nexus Venture Partners first put in $3 million in February 2012. This was followed by $5.5 million jointly by JAFCO Asia and Nexus Venture Partners in August 2013. "We are using these funds to expand our operations. We are still in the investment mode," says Narayan. Unmetric has yet to become cash-flow positive and hopes to reach that stage by mid-2015.

Narayan says he can never forget what his college education has given him. "I met my co-founders while studying at IIT-Madras and my wife while at IIM-Calcutta," he says. "Can I ask for more?"