The Bangalore-based start-up scans Twitter and collects news on different topics entered by users, and relevant to 55 cities across six countries. 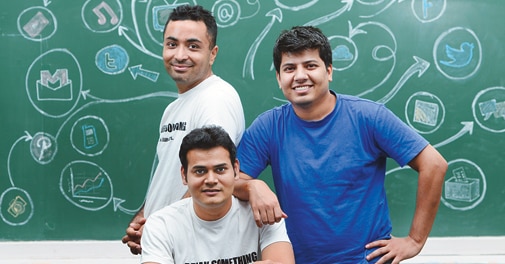 Its name is derived from a Punjabi word that means 'serendipitous discovery'. Bangalore-based Frrole scans Twitter and collects news on different topics entered by users, and relevant to 55 cities across six countries. The start-up filters these Twitter feeds, thereby making them great plug-ins for television channels and websites. "The key challenge with social data is that every single piece of relevant information is mixed with thousands of information pieces that are spam or irrelevant," says Amarpreet Kalkat, Co-founder and CEO of Frrole. "The challenge is to dig out Twitter feeds that are non-abusive, more positive and recent that can enhance a TV show's engagement, which we are able to do," he adds.

It was in 2011 that Kalkat, an IIM Kozhikode graduate, started Ciafo Techware, with Frrole being one of its products. Launched in April 2012, Frrole was initially a consumer- focused news product - news.frrole.com. By March 2013, it had garnered close to a million unique visitors a month. As the product gained traction, Kalkat reincorporated Ciafo Techware as Frrole in January 2014.

"The idea is to give users an alternative digital news platform, instead of depending only on mainstream media," says Kalkat, an IIM -Kozhikode graduate who had earlier worked with Trilogy, a US-based software company. He was quick to launch an android and iOS mobile app version of the site. The company ventured into enterprise offerings in August 2013 and is focusing on the media industry. Frrole is generating monthly revenues of two to three lakh and its clients include Brizz TV, Zoom TV and UTV. Its clients pay $100 per month per data stream. The company was bootstrapped by Kalkat with about Rs 15 lakh.

So, how does the technology actually work? Frrole processes over 10 million tweets a day (Twitter, on average, sends out over half a billion tweets daily). The start-up's technology platform uses filters to cut out relevant tweets from spam or irrelevant content. Raw tweets are then aligned with semantic information such as verbs, nouns, adjectives or pronouns. Tweets are further sorted out in terms of contextual information such as time-frame, sentiments, 'related to a personality' or genres like politics or fashion etc. The ability to address specific queries from clients differentiates Frrole from other data analytics companies. "We can answer questions like how many people are positive about a particular company's products on Twitter and who are they," says Abhishek Vaid, Chief Technology Officer.

The company plans to have a firm footing in the South East Asian market, one of the largest and fastest growing mobile markets for Twitter. Jakarta, the largest city of Indonesia is one of the five most active cities on Twitter. According to US market research company International Data Corporation, the global business intelligence market is expected to grow at a compound annual rate of 9.8 per cent through 2016 to reach $50.7 billion. "Any company with a digital media head or one that has employed a digital media agency is a potential client," says Peter Claridge, Marketing Manager of competing company Unmetric which operates out of the US and Chennai. Unmetric helps companies track and measure their performance on social media vis-a vis competing brands.

As social media engagement continues to become indispensable for companies, there will be opportunities galore for companies such as Frrole. "Young companies can create a strong foothold in specific industry verticals and create a powerful solution for the brand manager," says Parag Dhol, Managing Director at venture firm Inventus Capital Partners. "Such companies are worth betting on, but whether they will grow big to become public companies remains to be seen," he says.