Some 5,000 people have signed up to use Pugmarks, and Mohan and his two co-founders Venkatesh K. Sharma and Aditya Nag are working on taking it to half a million in the next six months.
Josey Puliyenthuruthel   Delhi     Print Edition: April 13, 2014 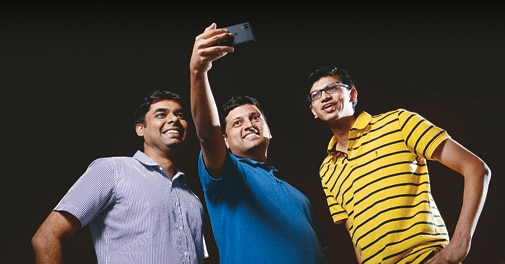 Bharath Mohan grew up in what he calls an "information hoarding society". That drives his obsession to help you discover information you don't know you need. "If someone can predict what's going through your mind depending on your context, that can be very powerful," says the CEO and Co-founder of Insieve Technologies, which launched its content discovery app, Pugmarks, in December.

Content discovery is an extremely difficult task, though it may sound easy. Think of Google Now, for instance, which tracks where you are and overlays that with, say, your calendar and throws up information on commute time and weather. Only complex algorithms running on brute computing power can deliver that "wow" user experience. Pugmarks is getting there. A customer at MTR, a popular Bangalore restaurant, can be presented reviews on why the filter coffee there is the best in that part of the city and tipped off that there's a coffee shop close by that's started roasting and grinding beans for a French press - all on the fly without asking for it and all in two-three seconds. "It is a precious moment of engagement," says Mohan, who earned his information retrieval spurs working at Google while completing his Ph.D.

Some 5,000 people have signed up to use Pugmarks, including this writer who likes what he sees, and Mohan and his two co-founders Venkatesh K. Sharma and Aditya Nag are working on taking it to the next level. "We have a target of half a million users in the next six months," says the CEO, adding nonchalantly that the company will focus on revenues much later -  in three years or so when the number of users is in several millions. His backers support him. "Revenues always follow usage. Therefore, as a company, the priority is to increase usage," says Gautam Balijepalli, a partner at Ojas Ventures, a Bangalore early-stage fund that financed Insieve with some $1 million in April 2012.

For years now, management academics and practitioners have bemoaned the fact that India has not produced a Google- or Viagra-like invention. Is Pugmarks that next big thing? "We have a fantastic content discovery engine. There are definitely the ingredients and the potential but will it become as big as Google? It's anybody's call," says Balijepalli.

Or, is Pugmarks being primed for a blockbuster sale based on number of users (think the $19-billion Facebook-WhatsApp deal)? "For me as a technologist, what matters is how many people use it. If your distribution channel is via a company [buying you out] or there is synergy, sure, why not," asks Mohan. "Innovation is not happening at the large companies. At the right time, you [the large company] acquire the smaller companies to acquire innovation."