The Joy of Giving

Today even relatively young companies believe in giving. The main concern of most organisations and individuals, however, is to ensure their donations are being effectively channelised.
Shamni Pande | Print Edition: Jan 19, 2014 Mueezu Mehraj looks no different from any other self-absorbed young Indian. But few know that Mehraj is deeply committed to giving. The 26-year-old, only in his first job at BPO giant Genpact, has already okayed monthly deductions from his salary for philanthropic causes. "I also spend time at Udayan Care in Gurgaon, helping girls from poor income homes improve their communication skills," he says. Udayan Care runs a network of children's homes.

Mehraj's example does not surprise Dhaval Udani, CEO, GiveIndia, an organisation that encourages people to support causes taken up by different NGOs. GiveIndia is associated with 125 companies, urging their employees to opt for voluntary payroll deduction to fund causes close to their hearts. "Young Indians are the ones pushing for change and really making a difference," says Udani. 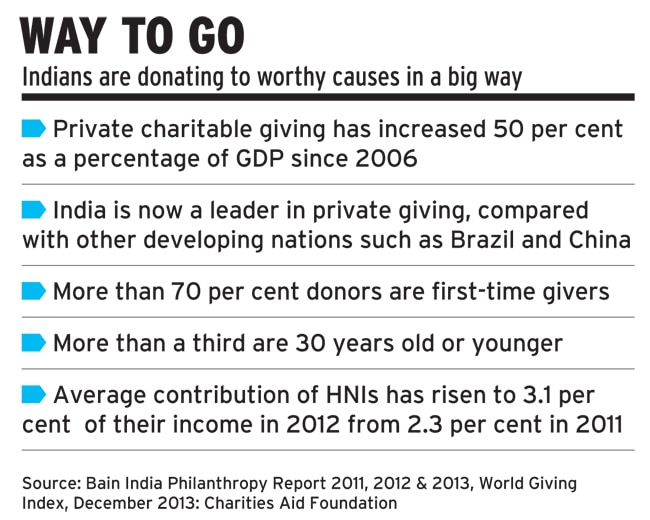 In fact, Udani, 36, himself is another example of how young Indians are increasingly turning to philanthrophy. An alumnus of IIM Ahmedabad, he gave up working with a management consulting firm to devote himself entirely to supporting charitable causes.

India's private giving totals anywhere between 0.3 and 0.4 per cent of GDP, compared with 2.2 per cent in the US, according to Bain India Philanthropy Report. But it won't be long before India overtakes US, say experts. "After all, India now has a mandate for companies' corporate social responsibility (CSR)," says Deval Sanghavi, Partner & Co-founder of Dasra, a body which assists philanthropists and social entrepreneurs with funding and strategies. Sanghavi is referring to a provision in the new Companies Act 2013, which requires companies to spend a minimum of two per cent of their average net profit in three previous financial years on CSR activities.

Sanghavi says corporate India had anyway been showing renewed interest in philanthropy. "I have done 12 meetings with CEOs of different companies in the last 15 days. They all want to know more and participate," he says.

This is in stark contrast to some years ago when companies and high net worth individuals were donating mostly to their own private charitable initiatives - which were few and far between - or to religious causes. First, Azim Premji, Chairman of IT giant Wipro Ltd, raised the bar by pledging almost a quarter of his wealth to philanthropic causes through his trust Azim Premji Foundation. In February 2013, he transferred personal shares worth Rs 12,300 crore to the foundation.

Today even relatively young companies believe in giving. Take MakeMyTrip.com, established just 13 years ago. "We have a CSR budget and about 40 per cent of our staff have signed up for GiveIndia's voluntary payroll donation programme. Besides, some employees regularly teach and connect with children and folks from partner NGOs," says Deep Kalra, Founder and CEO. Kalra has set a personal example. "I wanted to do something for orphaned and abandoned children and stumbled across Udayan Care," he says.

Genpact, too, is actively associated with philanthropy. "We like to associate with causes and institutions where we can actively contribute with our skills," says N.V. 'Tiger' Tyagarajan, President and CEO of Genpact. The company is involved in education and health-care as it has capabilities in these areas. It helps many social institutions strategise the work they do and measure impact and performance. "That is what we do in our business as well,"says Tyagarajan.

HCL Technologies is another example, taking up programmes in areas where it already has some expertise. Shivanandini Ramanathan, Test Engineer, HCL Technologies, Chennai, for instance, has been involved in community development, giving and advocacy initiatives of the company for more than a year now. "My team of volunteers guides less privileged youth from the slums with teaching and IT training," she says.

Separately, the Shiv Nadar Foundation, the private philanthropic initiative of the company's founder and chairman, has committed Rs 3,000 crore towards educational initiatives and expansion programmes over the next five years. The next generation of the Nadar family too is actively involved. "While my father has set up the foundation and the initiatives, it needs the involvement of the next generation to enable these institutions make the right impact," says Nadar's daughter, Roshni Nadar Malhotra, Trustee of the Shiv Nadar Foundation.

Indeed, the Bain report reveals that among families which participate in philanthropy, 76 per cent have younger relatives who have assumed an active role, while 69 per cent say young members shape or spearhead their charitable mission.

The main concern of most organisations and individuals is to ensure their donations are being effectively channelised. "Individuals and companies  want to know how their money will be used," says Arpan Sheth, Partner, Bain India, and the author of the Bain India Philanthropy Report.

How Microfinance industry is bouncing back