Credit where it is due

Public sector banks dominate the best banks rankings, with a clutch of them making big gains.

Madhava Kottari, 35, owns a small paan beeda shop on Car Street in Mangalore, and earns a profit of Rs 350-Rs 400 a day. In the 15 years that he has been running the outlet, he never thought about opening a bank account. Until a few weeks ago, when Corporation Bank officials approached Kottari with an offer to open a savings bank account in his name at a nearby branch. SB Smile, the scheme intended for small businessmen like him, earns the account holders the highest possible returns as it treats savings above Rs 5,000 as term deposits.

Ramnath Pradeep, Chairman and Managing Director, Corporation Bank, has kick-started the SB Smile campaign to rebuild the bank's dwindling CASA (current account savings account) funds - at 24 per cent it was one of the lowest in the banking industry as of March 2010; banks like Indian Bank and Canara Bank had a CASA of 33 per cent and 30 per cent, respectively. "There are large numbers of small businessmen without a bank account. Many of them will grow their turnover and hence, their bank balance. I thought they are a good source to build my CASA,'' says Pradeep, who took over as CMD in September.

Such out-of-the-box thinking is just one of the reasons for Corporation Bank being able to climb three places to No. 5 in the BT-KPMG Best Banks rankings in the large bank category. The bank has done well across all the main parameters of growth, asset quality and productivity and efficiency (see tables on page 108 for the details). Now it is stepping on the gas. The target is to grow the balance sheet from Rs1.67 lakh crore to Rs5 lakh crore by 2014-2015 by adding 200 branches every year to the current strength of 1,170. The bank, which has 28 per cent of its operations in Karnataka, is planning to commence or strengthen its presence in states where GDP growth is high. Alongside, Corporation Bank will add 900 ATMs to its existing network of 1,160 by next December.

So what explains this dominance? One answer: PSBs are still basking in the glow of being perceived as bastions of safety vis-à-vis their private sector and foreign counterparts since the global financial crisis of 2008. As T.M. Bhasin, Chairman and Managing Director of Indian Bank, puts it: "If earlier I was getting just 10 per cent of my new accounts from the younger generation, that ratio has now shot up to close to half in the aftermath of the financial crisis." 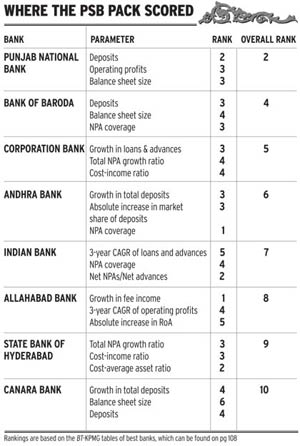 Indian Bank may have slipped a notch (because other banks did better) in the BT-KPMG rankings, but most PSBs that have gained have benefited from this changing - if arguably shortterm - dynamic. Proof of the pudding: Allahabad Bank, the biggest gainer with a jump of 16 places. The bank tops the charts on the parameter of growth in fee income, is ranked No. 4 on three-year compounded average growth in operating profits, and No. 5 for its absolute increase in return on assets. The target of J.P. Dua, Chairman and Managing Director, Allahabad Bank, is to improve the proportion of fee-based income from 15 per cent to a fifth of total income with 30 per cent growth every year.
TweetYoutube

A tale of derring duo