Dealing with your first slowdown

Infosys chief mentor N. R. Narayana Murthy had not done a town hall ever since he stepped down from the executive post in August 2006, but the 62-year-old industry veteran, who founded Infosys way back in the early ’80s along with half a dozen other IT professionals made an exception in January this year. He walked into the Infosys auditorium at Bangalore where over 5,000 Infoscions were waiting patiently to hear him for the first time in many years—some of them may be for the first time (the average age at Infosys is just 26 years).

The IT industry was in the grip of the global slowdown and the Satyam fraud had damaged India’s ‘software’ reputation abroad. After an opening speech of just a few minutes, Murthy fielded questions for over an hour. An employee who was present said Murthy’s short speech was very sentimental, filled with confidence boosters at a time when job losses are imminent, “We will never do anything that will make you put your heads down in shame,” he said. His message for young Infoscions: “It’s a great time to learn.” Questions came thick and fast. One Infoscion asked straightaway: Will there be any layoffs? Murthy’s reply: a big ‘No’. But he added: “Performance criterion will be definitely tightened.”

Murthy made a sincere attempt to send positive signals to the young employees. “You have to stay afloat now,” said Murthy, hinting that everybody has to be ready to work on any project anywhere.

Murthy is not alone in holding an open house with young guns, addressing their apprehensions and taking their feedback. Companies across yesterdays’ hottest sectors like banking, insurance and BPOs are doing it.

Keep it short & simple
Yesterday seems so far away. The youth of India’s workforce vis-à-vis demographics was the talking point of every CEO, analyst and economist. Today, this same young brigade is at the centre of attention because it needs hand-holding as it faces its first reality check. Employers are facing their own test: communicating with a workforce whose average age has fallen sharply over the past four-five years as new sectors like retail, aviation, BPOs, insurance and media set a scorching pace during the boom just ended. 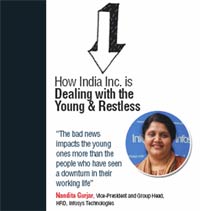 Click here to Enlarge
It’s not just the large numbers involved: another big challenge is the geographic spread. So, there is seven-year-old Bajaj Allianz Life Insurance Co, which has taken on 21,000 people across 160 cities and towns. Bajaj Allianz, today the second-largest private sector life insurer, put CEO Kamesh Goyal’s message on a CD that was shown to employees across the country. Goyal talks of key organisational issues as well as the challenges arising from the economic downturn.

Open houses or film CDs add to the conventional ways of communicating, which are through the Intranet, in-house magazines, letters and presentations. “We never ever imagined communication in a downturn with a young workforce would become such a big challenge,” admits the CEO of a financial services company.

And it’s not just the HR boss or zonal heads who are reaching out: Chairmen and CEOs have also begun talking. In December last year, Tata Group Chairman Ratan Tata wrote to all his managing directors and CEOs that the top priority should be to manage costs and improve operational efficiencies. Every CEO today faces two big questions from the young and restless: How long will the downturn last? Is our job secure?

Nandita Gurjar, Vice President & Group Head, HRD, Infosys Technologies, says: “The bad news impacts the young ones more than the people who have seen a downturn in their working life.”

Piyush Mehta, Senior Vice President & HR Leader at BPO pioneer Genpact, says almost 60-70 per cent of its young employees have to deal with the end consumers on a daily basis, and get to know first hand about difficult times around the world. “The key is to involve and engage the young employees at every decision to make them understand better,” he says.

Karthik Sarma, Chief People Officer at WNS, says power and transport are the two big expenses in his industry, apart from manpower. “We recently decided to minimise the hiring of cars for ferrying people home and have introduced buses. This decision was communicated to the staff and they have responded quite well,” says Sarma.

Bajaj Allianz’s HR Head Jaideep Chaure concurs: “...we need to ensure that all the information that they read and hear... is used positively rather than negatively. It’s very easy for employees to get panicky.”

Tell It as it Is
In mid-2008, when Arvind Retail & Brands decided to focus on its value brands, it had to shift the highend brands Excalibur and Newport— earlier sold through exclusive outlets—to its value retail chain Megamart. “It was a tough and an emotional decision as a lot of people were associated with the brands,” says Arvind Retail’s J. Suresh. Once they were convinced, the message went out to all employees.

Then, Infosys recently institutionalised the clocking system, requiring everybody to clock 9.15 hours daily. There was some resentment at first as many argued that they are knowledge workers and clocking is not for them.

“But we explained to them the need for clocking and they understood our point,” says Gurjar. Infosys has over 1, 03,00 employees —and an average age of 26 years.

The Jet Airways fiasco last year—it handed out pink slips to close to 1,000 and had to backtrack following a public outcry—has made the corporate sector more aware of the importance of communication. “We believe that employees carry the maximum goodwill to the external world,” says Glenn Saldanha, Managing Director & CEO, Glenmark Pharmaceuticals.

“What information is disseminated to the outside world is disseminated at the same time to employees, whether good or bad... (this) has been helping us,” says Saldanha. Glenmark grew from 450 employees to 5,500-plus in eight years.

Arvind Retail’s Suresh says the company has a practice of assembling every quarter to update employees. “We have been telling them that there may be some changes in timelines, but our strategy for growth will remain intact,” he says.

New yardsticks
Just as Murthy of Infosys has made it clear that performance criterion will be tightened, India Inc. is focussing on ‘productivity and efficiency’ with nobody sure of the extent of the downturn. “We had already started approaching business with enhanced focus on the ‘basics’,” says Chaure of Bajaj Allianz.

Tanuj Kapilashrami, Head of HR at HSBC India, says: “The big challenge would be learning and development because of the up-skilling and mindset shift required to do business in today’s more volatile economic environments.”

Clearly, the young workforces’ participation is valued by many big organisations.