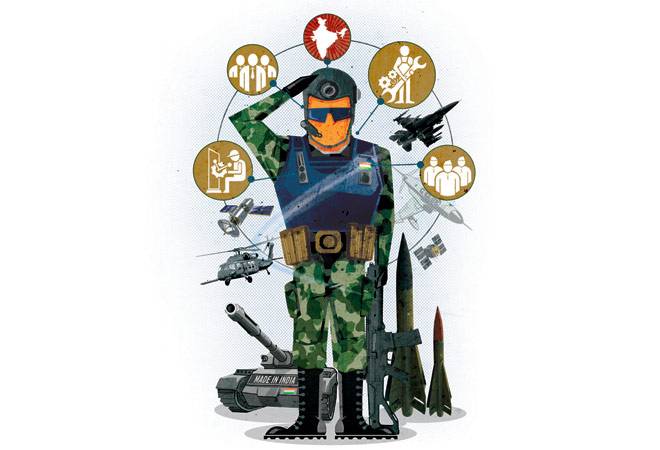 ABOUT: New global geo-political realignments, rapid technological shift in arms and armed forces' preparedness call for a relook at India's defence policy. India might still be primarily Pakistan-and-China focused, but tomorrow's enemy may not necessarily be the proximate enemy. Admiral Arun Prakash, former Chief of Naval Staff and former Chairman, Chiefs of Staff Committee, outlines how to prepare for the new adversary.

When 20th century French Premier George Clemenceau said, "War is too important a matter to be left to the generals," he was not disparaging the military, but merely emphasising the political character of war; a thesis mooted by German strategist Carl von Clausewitz. Terming war as 'an instrument of policy', and a 'branch of political activity', Clausewitz placed the onus of responsibility for conduct of war squarely on the politician's shoulders.

The Indian politician, in spite of his strident emphasis on the principle of 'civilian control' over the military, prefers to accord priority to electoral politics. He has, thus, failed to provide strategic guidance to the armed forces and wriggled out of his responsibilities by handing over control to the bureaucracy. The Ministry of Defence (MoD) bureaucracy, unfortunately, consists of itinerant non-specialists who barely begin to grasp complex military issues before they move on to another ministry. The powerful bureaucrats have, however, fought tooth and nail to exclude the military from the MoD, as a consequence of which, India's national security and higher defence management are in disarray.

This overriding preoccupation of our ruling elite with electoral politics is also the reason why India's massive defence budget has rarely been debated in Parliament. A further cause for dismay is the fact that the observations and recommendations of the watchdog, Parliamentary Standing Committee on Defence, are generally rejected or disregarded by the MoD with total impunity. 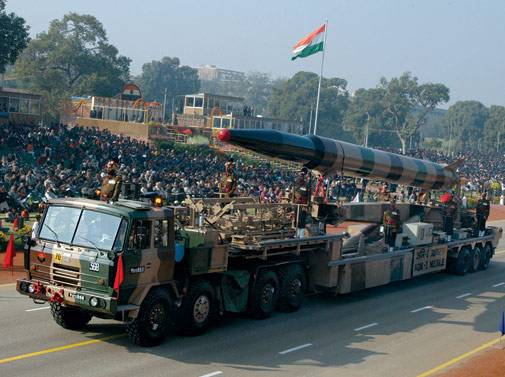 India is a nuclear weapon state with conventional forces that count among the largest in the world. The 2015/16 defence Budget was $40 billion, and a somewhat lesser amount was probably spent on strategic missiles, nuclear weapons, nuclear submarines and on other projects. The home ministry, too, maintains nearly one million-strong central armed police forces to guard the borders and undertake internal security tasks. All found, India possibly spends close to $100 billion on national security annually.

While coercion may not be our style, India has not even been able to leverage its armed might to deter or dissuade any country from undertaking actions inimical to Indian interests. The international community may applaud inaction on Indias part in the face of grave provocations, such as the 2008 Mumbai terror episode, but the Indian taxpayer is entitled to ask whether the annual expenditure of $100 billion is not too heavy a price for merely demonstrating 'strategic restraint'?

A totalitarian China, resolutely surging forward on the back of a burgeoning economy, is now within sight of great-power status. India's unique brand of democracy, on the other hand, continuously throws up impediments to progress on all fronts. The decade of UPA rule saw indecisive leadership, policy-paralysis and economic slowdown with long-term repercussions for national security. The early promise held out by the NDA regime, of visionary and resolute governance has, so far, proved illusory. With a log-jammed Parliament and palpable lack of vision within its ranks, the government seems to have meekly capitulated to a trenchant bureaucracy. This bodes ill for India's national security arena where bold and imaginative leadership is badly needed.

The Indian politician must acquire comprehension of security issues and involve himself directly rather than depending on an ignorant and obdurate bureaucracy.

Lest the writer be accused of being alarmist, a brief look at whether India's security environment is in order. The nature of conflict has been changing rapidly and India's national security framework faces threats spread across a much broader spectrum. While the possibility of inter-state conflicts is said to be receding elsewhere, India's two revisionist neighbours, Pakistan and China, continue to stake territorial claims, backed by nuclear intimidation. At the same time, threats from non-traditional sources, such as terrorism, maritime crime as well as health pandemics and natural disasters, continue to pose security challenges. The development of cyber and space warfare capabilities in our neighbourhood and the availability of weapons of mass destruction add a menacing dimension to existing threats. Apart from Pakistan-inspired cross-border terrorism, India faces other threats emanating from non-state entities. Al-Qaeda remains a deadly threat. A far more savage mutation, the ISIS, is now on the rampage in the Middle East and has declared that a cataclysmic battle, the Ghazwa-e-Hind, will soon be fought for control of India and establishment of a Caliphate.

At the grand-strategic level, while a diminished US plays a waiting game, we face Pakistani machinations for domination of Afghanistan, at India's expense, and China's quest for regional hegemony through its one-road-one-belt geo-economic gambit. These challenges promise to become the crucible for testing India's strategic acumen and diplomatic skills. With few cards - economic or military - to play, India would need to employ a skilful hedging strategy and buy a breathing spell while it builds economic and military muscle.

Given such a fragile strategic environment, the NDA government needs to bring sharp focus to bear on national security issues, which have suffered egregious neglect for the past seven decades. The most alarming consequence of this neglect is that India is the world's largest importer of arms and defence hardware. This not only undermines our security but renders all talk of 'strategic autonomy' quite meaningless.

Ironically, India has a vast defence-industrial complex comprising thousands of talented scientists working in a network of sophisticated DRDO laboratories. It is backed by advanced production facilities of the government-owned ordinance factories and defence public sector undertakings (DPSU). Among India's major technological achievements in the military field are nuclear weapons, a family of ballistic missiles and a nuclear-powered submarine. Our shipyards have delivered over a hundred modern warships, with many more, including an aircraft-carrier, under construction.

The 'holy grail' of indigenisation can be attained only if the vast resources of the DRDO and DPSUs are disaggregated and re-cast along the lines of successful models that exist in countries like the UK, Israel or Singapore. A DRDOcentred, incremental approach will not succeed. The Prime Minister needs to reach out to young Indians, like those who shine in Silicon Valley and Google, or those who created Aadhaar, Flipkart and Snapdeal; and mobilise them to undertake cutting-edge defence research.

India's failure to attain self-sufficiency in weapons, despite these achievements, is rooted in three unpalatable realities. One, much of the hardware, claimed as 'indigenous', either uses borrowed foreign technology or is produced under licence; with few inputs by Indian scientists or industry. Two, DRDO scientists have often been over-optimistic in their estimates. Finally, misguided policies have deliberately excluded India's efficient private sector from defence production. Consequently, at the heart of every ship, aircraft, tank or missile produced in India, there are key items that are sourced from abroad, which creates a dangerous dependency for the life-time of the equipment on an unreliable foreign source and also takes away India's option to undertake military actions at a time of its choosing.

The term 'revolution in military affairs' was coined in the 1980s, when radical technologies relating to computers, guided weapons and surveillance emerging in the US promised to become 'killer applications' on the battlefield. Today's world is in the midst of the 'third industrial revolution', enabled by developments in information and communications technology (ICT). India's $100-billion IT industry, continuously throwing up innovations, demonstrates that India has the talent and, in tandem with other emerging technologies, can bring about a revolution in the Indian military. None of the promises held out by the government, so far, whether it is Make in India, FDI in defence production or expeditious clearing of defence acquisition cases, can fructify in anything less than five to 10 years. India's national security structure needs urgent reforms. I list out five things that India needs to do urgently to get 'our defence policy right'.

One, the Indian politician must acquire comprehension of security issues and involve himself directly rather than depending on an ignorant and obdurate bureaucracy.

To ensure every rupee is spent with prudence and probity, there is an urgent need to create a cadre, within the MoD, composed of civilian and military officers formally trained in equipment selection, acquisition processes, contract negotiation and contract implementation.

Two, we must know the destination before we can chart a path to it. In seven decades of Independence, neither the government nor Parlia-ment has considered it necessary to issue a defence white paper, or undertake a strategic defence review. Long-term strategic planning is just not possible in such a vacuum, and the defence budget is spent in an ad-hoc and wasteful manner by individual Services satisfying their hardware 'wish-lists'. There is an urgent need for the government to articulate national aims and interests and to promulgate a national security strategy to attain them. The appropriate and required military capabilities will emerge from this process.

Three, the imperative need for re-structuring of our laggard military-industrial complex must be faced squarely. The 'holy grail' of indigenisation can be attained only if the vast resources of the DRDO and DPSUs are disaggregated and re-cast along the lines of successful models that exist in countries like the UK, Israel or Singapore. A DRDO-centred, incremental approach will not succeed. The Prime Minister needs to reach out to young Indians, like those who shine in Silicon Valley and Google, or those who created Aadhaar, Flipkart and Snapdeal; and mobilise them to undertake cutting-edge defence research.

Four, let us train and equip our defence-bureaucracy for its onerous responsibilities. With defence budgets likely to shrink, in real terms, there is not only a need for prioritising requirements projected by the Services, but also of ensuring every rupee is spent with prudence and probity. This calls for the urgent creation of a cadre, within the MoD, composed of civilian and military officers formally trained in equipment selection, acquisition processes, contract negotiation and contract implementation.

Finally, the current political establishment must show the courage to shed a toxic Congress-era legacy: paranoid suspicion of the armed forces and deliberate whittling down of their status through successive pay commissions. Ironically, by its clumsy handling of the one-rank-one-pension issue, a 'nationalist' BJP government may have outdone the Congress in alienating the military as well as its veteran community.

Whether it is Swachh Bharat, Make in India or Digital India, such dreams can prosper only within the paradigm of a Secure India, guaranteed by a confident and motivated military. A sagacious leadership would grasp this opportunity and boldly implement two of the national security reforms, promised in BJP'S 2014 election manifesto. One is to integrate the armed forces HQ with the MoD and eliminate the friction that delays decision-making and has stalled military modernisation. The other would be to put in place, the most critical component of a 21st century higher defence management structure; a Chief of Defence Staff (CDS) or a Permanent Chairman Chiefs of Staff Committee, thus creating a 'single-point source of military advice', so badly needed, for the political leadership.

India's national security has been endangered on many occasions due to a deep-rooted systemic inability to learn from past mistakes and implement timely corrective measures. Corroboration lies in the fact that every single post-independence military crisis has caught us by surprise. As our neighbourhood gears up for nuclear, cyber, space and integrated all-arms warfare, another Kargil could cost us dear. So, if history is not to repeat itself, it is vital that we get our defence policy right.

Coming together for 'Create in India'