Delhi may be the capital and the political nerve centre of the country but its problems are commonplace in most other Indian cities. The recent sporadic monsoon showers that inundated the city and almost brought it to a standstill exposed the complete lack of civic governance. There are other telltale signs that the city’s infrastructure is stretched to the limit—power outages, potholed roads, traffic snarls and overcrowded airports is something the ordinary Delhiite is reconciled to. Delhi all lit-up: Peak power demand unlikely to cross the 6,000-MW mark in future
Not the most conducive business environment, but then these are not the only reasons why Delhi has dropped one position in our survey of “Best Cities for Business” in India (it has been displaced by Bangalore at the No. 2 slot while Mumbai continues to rule at No. 1).

Its Achilles’ heel, CEOs say, continues to be its poor law and order situation. Says Pramod Bhasin, President and CEO, Genpact, which is headquartered in Gurgaon, near Delhi: “Law and order is the biggest factor impacting the business sentiment in the national capital region (NCR). The safety of women, in particular, is an issue.” Something for the authorities to chew on.

Having said that, while law and order remains a grey area and a matter of concern, ironically Delhi has slid in our rankings at a time when things seem to be looking up for the capital. The city is getting a makeover with an eye on the Commonwealth Games in 2010. If things go as planned, the city’s basic infrastructure will get a complete overhaul in another two years. Attempts are being made to transform Delhi completely with the objective of making it a world class city by 2010.

Delhi over the next few years will have a significantly improved road and transport infrastructure (a sixlane section of National Highway 8 connecting Delhi and Gurgaon is already functional). More flyovers and underpasses will be constructed across Delhi to decongest traffic.

Keeping in view the need for infrastructure development in the capital ahead of the Games, the Municipal Corporation of Delhi has given its approval for construction of six new flyovers. Work on the proposed flyovers would start within six months. This is in addition to 37 flyovers that have been completed over the past eight years and 16 more flyovers and rail over bridges (ROB) are under construction. 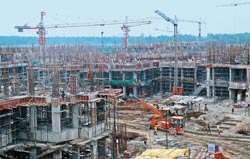 Game for the Games: Construction work is on at the Emaar-MGF Commonwealth Games village to house the athletes
In the coming few years, Delhi is expected to be a city with minimum red lights, which means that the traffic problem will be reduced to a great extent. Says Bhasin: “Certainly a lot of emphasis is being laid to rebuilding roads and decongesting them. A lot of the credit goes to Shiela Dixit who is an outstanding Chief Minister.”

Then, primary facilities of transportation would improve for Delhi residents, with plans to expand the existing Metro Rail Service to other parts of Delhi and NCR. The current 65-km-long Delhi Metro Rail’s expansion plan calls for more than 400 km of lines to crisscross the city and extend to the suburbs of Noida and Gurgaon before the Commonwealth Games. Besides providing convenience of travelling within the city, Metro Rail offers better connectivity with the satellite twin cities of Gurgaon and Noida. It has the potential to become the “life line” of Delhi as people are slowly becoming dependent on the Metro for commuting to different pockets of the city. Already the “Delhi Metro Project” has been recognised all over the world for its hi-tech rail and better equipped transport system. Click here to Enlarge
Says Chandrajit Banerjee, Director General, CII: “The metro would be instrumental in providing proper connectivity between all the major regions of the NCR.” The city’s international airport, too, is being spruced up. A massive expansion project is underway at the Indira Gandhi International Airport. A new terminal and runway are under construction and scheduled for completion by 2010. This is expected to increase capacity to 37 million passengers a year. More terminals and runways are planned thereafter, since the airport authorities are expecting a capacity of 100 million passengers a year by 2026

Power has emerged as another thrust area for the government. Capacity building on the electricity front is a priority concern for the city government, which intends to spend more than Rs 4,500 crore on energy during 2007-12, while in excess of Rs 600 crore would be spent in the current financial year alone. Sold on Metro: The MRT service is a hit
Though the Commonwealth Games are to be held during October 2010, when the power demand is normally not very high, the government is taking no chances. The city’s peak hour demand is unlikely to cross the 6,000-MW mark in the near future.

The authorities are now targeting 7,000 MW power capacity over the next two years to have a comfortable surplus. The city will get power from the Damodar Valley Corp., National Thermal Power Corp., Dadri power plant, Jhajhar plant and the Pragati power plant that would stack up to over 4,000 MW. The government intends to get another 1,800 MW from local sources in addition to the existing installed power generation capacity of 932 MW. Horizontal spread: Gurgaon is the new business hub, but infrastructure sucks
It will also initiate certain corrective measures to streamline power supply. The transmission and distribution loss is being tackled— it was around 49 per cent in 2007-08 against the national figure of 30-31 per cent. The government is also looking at a couple of new projects from the Centre’s capacity addition programme for the 11th Plan period (2007-12).

At the moment, the city stands to get 750 MW from the upcoming power plant at Jhajhar in Haryana. Officials point out that while the central government had fixed the capacity addition of 78,577 MW for the 11th Plan period, no project had been earmarked for Delhi and efforts are on to get some projects in the city-state territory. Says Amit Mitra, Secretary General, FICCI: “Over the last 15 years, the state has not been awarded a single power project and that’s quite disappointing.”

The hospitality industry in Delhi and the National Capital Region (NCR), too, is slated to undergo a major revamp as the city gears up to host business tourists from across the globe in the face of large-scale investments. Says Banerjee: “Clearly, it’s an important focus area if Delhi is to emerge as a business hub. We need more hotels in the city across categories from five-star to budget hotels”. The NCR is expected to see an estimated 27 new hotels, serviced apartments and mixed-use developments with approximately 4,900 rooms in various categories over the next 3-4 years. 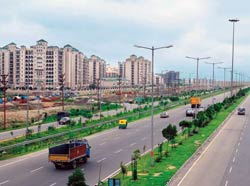 Road to growth: A section of the Taj Expressway in Noida
Delhi, then, analysts say, has the potential to emerge as India’s most favoured investment destination over the next few years. More so, it’s felt that with the inception of the NCR region, Delhi has been partly relieved of the burden of growing demands from corporate bodies and government establishments. The city needed more expansion and a better infrastructure to meet the demands of globalisation. However, with the development of satellite cities like Gurgaon and Noida, this problem was solved to a great extent. Says Mitra: “Unlike Mumbai, Delhi still has space available to expand in the NCR region, particularly along the Gangetic plain.”

However, despite the flurry of initiatives, there is one area where the capital still falls short: law and order, which appears be the biggest impediment in Delhi emerging as the best city for business in India. Are the authorities listening?