"Do not rely on a single economy"

Larsen and Toubro (L and T) was affected due to the slowdown—particularly the products businesses, which include switchgears, construction equipment and industrial bars.

Larsen and Toubro (L and T) was affected due to the slowdown—particularly the products businesses, which include switchgears, construction equipment and industrial bars. This was largely because government projects (which account for half of landt’s overall business) were put on hold because of the General Elections. We pushed hard in new businesses where investments were not stalled. We got aggressive in railway turnkey projects, where the order book increased by Rs 3,500-4,000 crore. We entered thermal power plant manufacturing. Result: Our order book increased by 59 per cent in the September-ended quarter. Our sales will grow only by 15 per cent this fiscal (as against 30 per cent a year ago); but one year later we will grow much faster. 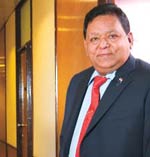 A.M. Naik, Chairman and MD, Larsen and Toubro
A slowdown in government projects can be countered by not being dependent on a single economy. We aggressively expanded our international footprint. Offices were opened in Libya, Brazil, South Africa, Indonesia, Malaysia and West Asia. Though these territories do not contribute much today, they will in future.

We did not slow down our capital investment. Investments worth $1.5 billion—in areas like shipyards, heavy engineering and power equipments—were made in the past 24 months, which is more than what we have made in the last 10 years. Once the economy is on an upswing, the benefits will come and we believe that the Indian economy will grow much faster in the next decade.

It’s the determination of individuals that leads to success, irrespective of the conditions. Everything is doable if you have devotion, passion and conviction whether in good or bad times—and these values are even more important in bad times.

(As told to Virendra Verma)

A launch pad for the Indian multinational

"Expect shocks to occur than be surprised by them"