Down, but not out

Even as Chennai’s residential market is slowing down, commercial and retail demand has held firm.

When India-born Chairman and CEO of $40-billion PepsiCo, Indra Nooyi, decided to buy a house back in India, she chose her hometown Chennai and zeroed in on a 4,100 sq. ft flat at the posh Poes Garden. It cost her a cool Rs 6.5 crore (at Rs 16,000 per sq. ft) and she will have as neighbours film star Rajinikant, former Tamil Nadu Chief Minister J. Jayalalithaa and several other who’s who of Chennai. 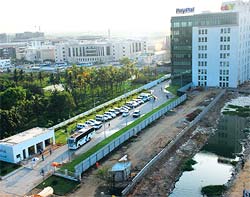 No major price correction in Chennai's realty space
But that was October last year. These days, such deals are rare as the city’s residential market enters the doldrums. “After a record 50 per cent plus price increase per annum in 2005 and 2006, the housing market witnessed moderate growth in 2007. There was a slight price increase in the first quarter of 2007 after which the prices and sales volume have stagnated,” says Ramesh Nair, MD (Chennai), Jones Lang LaSalle Meghraj. Potential buyers are waiting and watching and this has impacted sales.

“Developers who were selling their entire projects in a few days are now taking months to sell their unsold stock,” adds Nair. The worst hit are apartments that cost upwards of Rs 60 lakh.

Developers are now willing to negotiate prices with potential buyers, and they are also sweetening deals with freebies such as free car park and interest waiver during the construction period. Varada Rajan, 40, who works in an IT company, has been looking to buy a house in south Chennai for many months now. “There aren’t too many projects available in the city and prices of what is available are not affordable.

Even a second-hand threebedroom apartment costs more than Rs 80 lakh. The only option is to wait for a price correction,” he says. The sluggishness, however, has not translated into a fall in prices yet.

There is a short supply of apartments within the city and that is keeping prices up. It is in the suburbs that prices have dropped because of higher supply. Residential demand is expected to be under pressure in 2008. This will hurt volumes but a significant fall in prices within the city is unlikely in the next 12 months. However, there is demand for commercial office space. “The year 2007 saw the absorption of 7.1 million sq. ft of office space and the first quarter of 2008 saw an absorption of 1.4 million sq. ft,’’ says Nair. Of that, IT and BPO companies alone took 6.6 million sq. ft. Chennai is the secondlargest office market in the country after Bangalore.

There has been a clear shift among IT companies towards special economic zones (SEZs). “Large occupiers have moved to SEZs due to the uncertainty over the extension of tax benefits under the STPI scheme and as a better long-term strategy,’’ says Thirumal Govindraj, Senior Director, Chennai & Hyderabad, CB Richard Ellis.

That explains why demand for space in IT parks grew by 14 per cent while that in SEZs jumped 140 per cent in 2007. Nair puts demand for office space in Chennai at 7 million sq. ft in 2008. Non-IT space rentals are likely to move up further by 15 per cent.