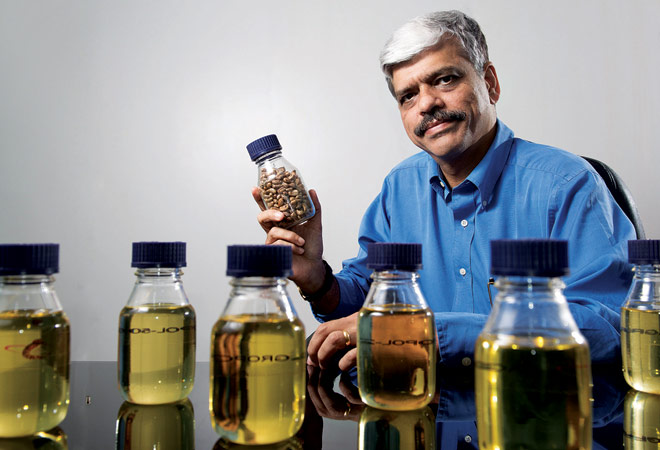 Ihsedu Agrochem Pvt Ltd (IAPL) - the name sounds like that of a Japanese joint venture. It is not. "Just reverse the letters of my surname, and see what you get," says Abhay V. Udeshi, laughing. Udeshi is Chairman of Jayant Agro-Organics Ltd (JAOL), IAPL's parent. IAPL produces castor oil and castor oil derivatives, while JAOL makes castor oil-based chemicals and specialty chemicals. IAPL contributes over half the turnover of JAOL.

In 2002, JAOL bought a crushing unit in Banaskantha, Gujarat, from Gujarat Agro Industries Corporation. Two years later, IAPL came into existence when it was hived off. "It was a conscious decision to divide the business into two," says Udeshi. "It ensures focus on efficiencies and competitiveness." The plant was later fully modernised and its castor seed crushing capacity increased in stages from 100 to 1,200 tonnes per day. "Our capacity utilisation is about 900 tonne," Udeshi adds. IAPL had revenues of Rs 978.99 crore in 2014/15, up from Rs 945.62 crore the previous year.

India is a global giant in castor, supplying about 85 per cent of the world's needs. It produces 1.3 million tonnes castor seed annually from which around 600,000 tonnes oil is extracted, valued at around Rs 4,500 crore. Unlike other plant-based oils, castor oil is not a vegetable oil and is largely used for various industrial applications in the chemical and oil industries. Engineering plastics like nylon, lubricants, paints and pharmaceuticals are some of its biggest consumers.

India's global dominance makes IAPL a global giant too, with the company providing about a fourth of the world's castor oil. Its main rivals are Adani Wilmar and Gokul Refoils & Solvent. "The industry in India is a small, closed ecosystem involving farmers and oil producers," says Udeshi. JAOL, too, is one of the largest specialty chemicals producers in the world. Curiously, its domestic rivals are few as 90 per cent of the value addition in castor oil by the specialty chemical industry takes place overseas.

JAOL was set up in 1992, though its owners were in the oil business for 40 years before that. In 2002 - the same year the castor crushing unit was acquired - it separated from Jayant Oil Mills, following a split between the Udeshis and their joint promoters, the Kapadias. While Jayant Oil Mills went to the Kapadias, Abhay Udeshi's father Vithaldas Udeshi took over as Chairman of JAOL and remained so till his death in 2013, after which Abhay took over. The same year, French company Arkema, the world's biggest buyer of castor oil, acquired a 24.9 per cent stake in IAPL, investing nearly Rs 30 crore. There are plans to make many more industrial and specialty grades of castor oil. "The industry has been facing a period of stagnation with intense competition," says Udeshi. "The solution is to develop innovative products and new processes to maintain our leadership, which is why we brought in Arkema."

Analysts have applauded the move. "Through this JV with Arkema, Jayant Agro and its subsidiary Ihsedu will further consolidate their positions in the castor oil market as leading, consistent and reliable suppliers to the world market," says an HDFC Securities note. Indeed, JAOL is becoming increasingly proactive - it also set up another joint venture, Vithal Castor Polyols, with two Japanese companies, Mitsu Chemicals and Itoh Oil Chemical, to make polyols, a substitute for polyurethene (foam). Udeshi hopes to double JAOL's turnover by 2020.