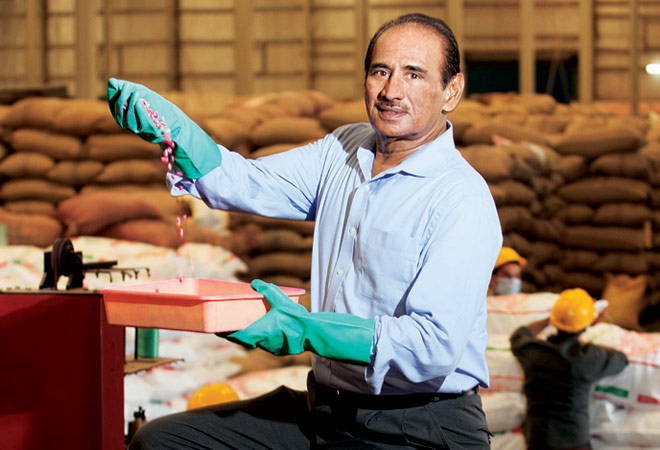 Staying close to its farmer-consumer, anticipating demand and taking risks to provide for it, are the hallmarks of Kaveri's success. Apart from Bt cotton, where it owns the popular brands 'Jadoo', 'Jackpot' and 'ATM', it also produces hybrid seeds of maize, rice, millet, mustard and more. Maize seeds contribute 15 per cent to its revenue and rice seeds six per cent. The remaining income comes from the other seeds, as well as Kaveri's four subsidiaries - one engaged in marketing, one in research and marketing, a third working on bio-nutrients and a fourth growing exotic vegetables in poly houses.

WITH 70 PER CENT REVENUE COMING FROM THE SOUTH, KAVERI NEEDS TO EXPAND TO CENTRAL AND NORTH INDIA AS WELL AS OVERSEAS

"To produce so many seeds, pack them and distribute them in a window of barely 15 to 20 days just before the sowing season, you need to plan well in advance," Bhaskar Rao says. He began working on the expansion from 2011. "We invested in manpower, research, infrastructure, distribution, and identification of skilled farmers," he says. Manpower, for instance, has risen from 700 in 2011 to 1,100 in this period, while the company spends between Rs 30 and Rs 50 crore on R&D and better infrastructure every year.

It has been a long journey from 1976 when Bhaskar Rao, an agricultural graduate from Karimnagar (now in Telangana state), set up his seed company, initially named after himself and later called Kaveri Seeds, because most of his revenue flowed from the state where the Cauvery river meandered. Marketing was hard work, much of which he undertook himself. He still retains the black Royal Enfield motorcycle on which he travelled from village to village, though today his preferred vehicle is a gleaming Toyota Land Cruiser. "In 1980 alone, I travelled around 300,000 km on this motorcycle carrying our seed packets to farmers and then revisiting them again at the end of the season to collect money from them," he says. That year, his revenue was around Rs 4 crore. By the time Kaveri listed on the stock exchanges in 2007, it had risen to Rs 67 crore.

"In 1985, we were selling only 150 tonnes seeds during the kharif season," says Bhaskar Rao. "But within three years this went up to 3,000 tonne." Early on, the company also started collecting germplasms and working on new hybrids. It 1997, it came out with its first original hybrid maize variety Kaveri 517, which produced 25 to 30 per cent higher yield per acre and was resistant to drought. Today, Kaveri markets around 75 of its own hybrids in different crops such as maize, sunflower, paddy, jowar and bajra, apart from hybrid vegetables like tomatoes and chillies. Another 50 hybrids are being worked upon to replace or strengthen the current ones. The company now has five processing units. "I'm confident of a year-on-year growth of at least 20 per cent, though if you see our track record of the last few years, we've been growing at around 40 per cent every year," says Bhaskar Rao.

CORE STRENGTHS:
Strong R&D with 55 scientists and healthy pipeline of new hybrids across about 50 crops

GOALS:
To double revenue in the next five years

The total Indian hybrid seeds market is around Rs 12,000 crore, according to industry estimates, of which the largest component is Bt cotton at about Rs 5,000 crore, followed by maize at Rs 2,200 crore and rice at Rs 900 crore. Kaveri is the second biggest player in Bt cotton, with a market share of around 18 per cent - behind only Nuziveedu Seeds, which is leading with a market share of around 20 per cent in this segment, according to market estimates. Kaveri is also among the top three in hybrid maize and rice seeds, with market share of 12 and six per cent. In hybrid maize, DuPont is its biggest rival; in rice, it is Bayer. "I think Kaveri has been a very innovative company as it has not only come out with winner hybrids but also has the ability to market them well," says Kapil Mehan, Managing Director, Zuari Agro Chemicals, a close observer of the agriculture sector for many years.

Barring yoga, for which he makes time every day, Bhaskar Rao maintains he has few other interests apart from his company and the farm sector. But he has realised the need to be less hands on so he can focus on strategy. This year, for the first time, Kaveri appointed a chief operating officer (COO), G.S. Satish. "He is an agriculture graduate who also has an MBA from IIM Ahmedabad and many years of experience in leading global companies," says Bhaskar Rao. Other recent appointments include a supply chain head and a national sales manager. "I need to keep professionalising and investing in manpower if I am to get the growth I want," he adds.

Bhaskar Rao hopes to double revenue in the next five years. With 70 per cent of his turnover coming from Andhra Pradesh, Telangana, Tamil Nadu and Karnataka, he knows he needs to expand his market to central and north India, as well as overseas. A beginning has been made with the export of maize seeds to Bangladesh for the last two years, but he hopes to move beyond into Sri Lanka, the Philippines and Vietnam as well. However, there is enormous potential left even within the country. "Only three to four per cent of Indian farmers use hybrid rice seeds, while 90 per cent of Chinese farmers do," he says. "True, with maize, 70 to 80 per cent Indian farmers are using hybrid seeds, but here too some scope for growth remains."

"Kaveri will become more sustainable in future if it can leverage its R&D to repeat the success story of its Bt cotton brands in other categories, including hybrid vegetables," says Mehan of Zuari.

How PVR has maintained its leadership position