End of the Indian outbound story?

September 2008: Infosys makes a bid for acquiring consulting major Axon of the UK for $748 million. Days later, domestic rival HCL Technologies gets into the fray with a counter offer that’s 8 per cent higher. Days later, Infosys backs out from the race for Axon.

It’s a remarkable turnaround— in sentiment, confidence and fortunes. Until last year, Indian companies were willing to pay virtually any price to buy assets or companies abroad. Promoters expressed their ambitions to “globalise” and become Indian multinationals, investment bankers made hay whilst the sun shone, and the media— both local and international— saluted these soldiers of fortune who were determined to break down domestic barriers and march boldly into uncharted territories.

S. Subramaniam
It’s a slightly different story in these days of credit crunches and battered equities. Billion-dollar transactions, till recently par for the course for Indian promoters, have all but dried up. Even smaller deals are few and far between, despite assets being available at fire-sale prices. Robin Banerjee, CFO and Director (Finance), Essar Steel Holdings, sums up the situation succinctly: “Target companies are certainly cheaper now. But given the turmoil in the credit markets, it makes sense to conserve cash rather than go for an acquisition at this point of time.” The lack of action in outbound mergers & acquisitions (M&A) is evident in the slump in the numbers in 2008.

For those who’ve already cut those mega deals, which include India’s biggest conglomerates like the Tatas and the Aditya Birla Group, now is the time to rustle up those billions in prepayments and repayments on loans taken to bankroll the M&A spree. And that task is proving no walk in the park. Consider: Tata Motors had planned a Rs 4,145-crore rights issue to repay a bridge loan taken to finance the $2.3 billion acquisition of Jaguar Land Rover. The stock market crash made the rights issue at Rs 340 per ordinary share (and Rs 305 per share with lower voting rights) unattractive, as the price in the market dipped way below the offer price at the time of issue. Investors obviously chose to ignore the issue. Result? The company along with the merchant banker to the issue, JM Financial, had to subscribe to 60 per cent of the issue. Whilst this might have given the Tatas an opportunity to increase their stake in the automobile giant cost-effectively— from 33 per cent to 42 per cent—it still involved an outgo of around Rs 3,000 crore.

Sameer Nath
The Aditya Birla-owned Hindalco Industries found itself in a similar predicament, when its stock price fell below its rights issue price of Rs 96 per share. The aluminium major had floated the Rs 5,047 crore issue to repay a $3 billion bridge loan taken last year to fund the $5.7 billion acquisition of Novelis Inc. of Canada. With investors refusing to bite, the five bankers to the issue subscribed to 40 per cent of the issue, with the promoters mopping up to 50 per cent. Hindalco has managed to raise $982 million from a syndicate of 11 global banks at 3.15 per cent above the Libor (London Interbank Offered Rate), and hopes to repay the rest of the loan through internal accruals and by liquidating treasury holdings. 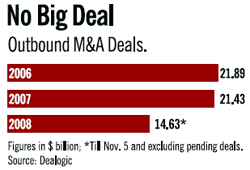 Whilst the Tatas and Birla were able to see their issues through, another cross-border mover, Tulsi Tanti of Suzlon Energy, wasn’t so lucky. Suzlon had little option but to scrap a Rs 1,800-crore rights issue due to lack of investor appetite. The company was raising money to increase its stake in REpower Systems, in which it had in June 2007 acquired a 34 per cent stake; Suzlon has hiked it to 90 per cent in 2008. It now needs to arrange an equivalent amount through other sources.

If the big boys are burning midnight oil to get their financing act together, medium-size enterprises have little option but hit the brakes in their quest for growth. For instance, the Pune-based Sanghvi Movers, a Rs 250 crore crane manufacturing company, has put on hold its plans to spend $2 billion on overseas acquisitions. Then there’s the Kolkata-headquartered Stone India Ltd., a manufacturer and supplier of railway equipments, which has been scouting for a European company in a similar business since September. Amitava Mondal, MD & CEO, Stone India, says those ambitions have been put on the backburner for now.

Kishore Srinivasan
While the sharp drop in market valuations makes a case for acquisitions, it comes at a time when a global credit crunch has made banks pull back their lending activity, thereby affecting the financing of acquisition deals. Kishore Srinivasan, Executive Director (Structured Finance), Avendus Advisors, says a lot of deals are stuck because the cost of funding has gone up significantly. “Earlier banks were willing to lend at a mark-up of 3-3.5 per cent over Libor, which has now gone up to 6-6.50 per cent. Banks now want higher collaterals and stringent covenants for lending for an acquisition,” adds Srinivasan. Bridge finance, under which companies take a short-term loan to finance an acquisition and replace it with a mix of long-term loans and equity at the end of tenure, is clearly out of favour now.In such circumstances, cash, and companies sitting on cash, is king. “Companies that have a cash chest are clearly of the opinion that this is the best time to buy assets,” says S. Subramaniam, Head of Investment Banking, Enam Securities Pvt. Ltd. A senior executive at a foreign bank, on condition of anonymity, reveals that that he is advising only cash-rich companies to undertake an overseas acquisition. Companies that had lined up brownfield and greenfield expansion plans are now contemplating a buyout, which could be cheaper than putting up a new project, adds the executive.