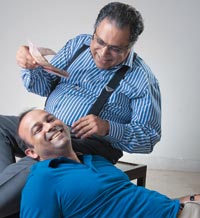 BPO entrepreneur Raman Roy (seated) co-founded the Indian Angel Network in 2006. The network made its first investment the same year, in KnowCross Solutions, founded by Nikhil Nath (in front).Photo: Vivan Mehra
In countries such as the United States, Israel and Singapore, entrepreneurship has largely taken off because of an enabling infrastructure. In India, however, start-ups mostly found their way on their own. But a bunch of experienced entrepreneurs and corporate honchos, who have faced similar difficulties themselves, now want to become the backbone for start-ups. Their support models are different, though. Some are helping start-ups get off the ground or get their first cheque of seed capital. Others are helping entrepreneurs overcome the challenges of scaling up.

Rajesh Sawhney, for instance, quit as President of Reliance Entertainment earlier this year, after working with the company for seven years. He then founded Global Super Angels, a start-up accelerator that works in multiple cities . Sawhney is passionate about Internet and mobile businesses. "When I saw my personal motivations and the big change that is happening, driven by technology and Internet, I felt a connection," he says. "I want to mentor startup entrepreneurs for the next 10 years of my life." 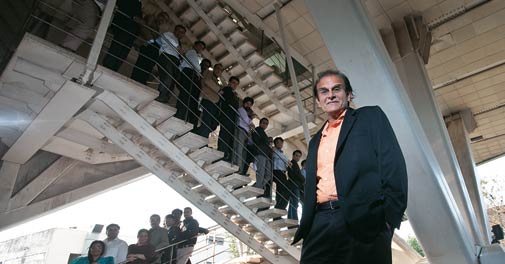 Harsh Mariwala, founder of consumer goods company Marico, has rolled out a programme to help growth-stage entrepreneurs to scale up. Photo: Nishikant Gamre
For Harsh Mariwala, who founded consumer-products company Marico in the 1970s and notched up scale from a modest Rs 40 lakh in 1971 to Rs 4,000 crore in 2012, the reason is different. It comes from the understanding that an entrepreneur's journey is often testing and lonely. A large number of companies struggle to scale up further after a certain point, he says. It is with this in mind that Mariwala has launched a programme called Accelerating the Scaling Up of Enterprises (ASCENT), to enable growthstage entrepreneurs to scale up. Sunil Goyal (left), former CEO of Bharti Teletech, quit the corporate world to set up YourNest Angel Fund. The fund invested in start-ups such as www. mycity4kids.com, an online marketplace for kids-related services founded by Vishal Gupta (right). Photo: Aditya Kapoor
Sunil Goyal is another of those who quit the corporate world to support start-ups. Goyal, a former CEO of Bharti Teletech, set up YourNest Angel Fund along with Sanjay Pande to mentor and invest in early-stage businesses. "Small is the next big thing to invest in," he says.