After a heady 2010, the bulls are on the backfoot in the New Year and the bears are on the prowl. Macroeconomic headwinds and a paralysis in governance could keep the bulls away.

After a heady 2010, the bulls are on the backfoot in the New Year and the bears are on the prowl. Consider this: the Sensex soared 3,000 points in 2010 as foreign institutional investors, or FIIs, captivated by the India shining story, pumped in a record $29.4 billion into the equity markets. India will remain a good long-term bet, chorused the bulls. But a few weeks into 2011 and a palpable sense of gloom has descended on Dalal Street. The Sensex had shed 2,113 points in 2011 at the time of going to press and the FIIs have turned net sellers.

And traders are fretting that the markets may remain tentative awhile. So what is worrying the bulls? Most say the total paralysis of governance in New Delhi followed by the recent spate in corruption scandals have soured market sentiment. "Corruption and scandals are factors that are negatively affecting valuations and increasing the risk premium attached to investing in India," says Boston-based Punita Kumar Sinha, Senior Managing Director at Blackstone Asia Advisors, an FII investing in India. Global investors are typically very sensitive to governance issues in emerging economies.

"For any emerging economy, it is important to have a good governance record in order to pre-empt possible adverse reactions from international investors," says Siddhartha Sanyal, Chief India Economist at Barclays Capital.

Hong Kong-based Adrian Mowat, Chief Asian and Emerging Market Equity Strategist at JP Morgan, seconds Sanyal. The second half of 2010 was marred by scams, and Parliament's failure to pass any legislation, says Mowat, has gradually taken its toll on market sentiment. He hopes Parliament is allowed to conduct business during the Budget session. "If it does then political sentiment will improve. The prosecution of high-profile people accused of corruption will also improve confidence. Sadly, the expectation is that it will not happen," he says. 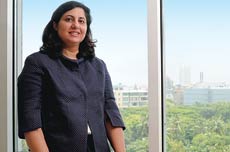 Punita Kumar Sinha, Senior Managing Director, Blackstone Asia Advisors
The government's hands may also be tied with Assembly elections in five states slated for 2011, worry analysts. "There could be some political compulsions," says Parul Saini, Executive Director at Singapore-based RBS Asia Securities. With the Assembly elections and the ongoing political stalemate around corruption, the Street does not expect progress on any politically sensitive reforms. "Given the upcoming elections in various states, it is possible that the Budget will continue to spend on subsidies," says Sinha.

Macroeconomic concerns are adding to the woes of the bulls. Galloping food inflation and hardening interest rates could derail the Indian economy in the short- to medium-term is the consensus in dealing rooms. The fears may not be entirely unjustified. On January 25, after announcing a 25 basis point (100 basis points make a percentage point) hike in repo and reverse repo rates, D. Subbarao, Governor, Reserve Bank of India, or RBI, stressed the dangers of "food and fuel price increases spilling over into generalised inflation". He added: "There has been a sharp rise in global commodity prices, which has heightened upside risks to domestic inflation."

The RBI has raised its inflation projection for March 2011 from 5.5 per cent to 7 per cent. "The inflation fears are justified," says Mowat. The prices of oil, agricultural products and metals are up 17 per cent, 16 per cent and 10 per cent, respectively, over the past three months, which, Mowat points out, is a threat to growth. "Oil exceeding $100 a barrel could be another negative for investors and overall business confidence," he says.

All the negative news could potentially take its toll on FII flows. So, could we see outflows from India? "We are expecting a slowdown but not a reversal," says Saini. According to him, it may be hard to replicate last year's situation. "As the economic recovery in the US takes hold, investor funds may flow back into equities there at the expense of emerging markets," he adds.

Agrees Sinha: "Clearly, there is a rotation happening. If the US economy continues to show signs of improvement, then some of the allocation could move out of emerging economies, including India." Developed markets, then, could outperform emerging markets such as India this year. "Developed markets are enjoying a cyclical lift, which for now seems more important than their still-serious structural issues," says Mowat.

This is bad news for Indian companies as their plans to raise capital from the primary market could be hit. Last year saw the highest ever mop-up of public issuance by Indian corporates worth about Rs 59,523 crore. In 2011, there are 100 public issues in the pipeline for the private sector alone. "The indicative IPO size from these public issuances is about Rs 50,000 crore," says a report from New Delhi-based SMC Global Securities, a brokerage firm. The government's $10-billion PSU divestment programme will also be impacted. "A slowdown in foreign flows does make a divestment process more difficult," says Saini.

Given the headwinds, then, expect the markets to remain edgy and nervous in the short term. But for the long-term investor, the rules of the game remain the same, say analysts. Every dip is an opportunity to accumulate quality stocks.

It's the elections, stupid