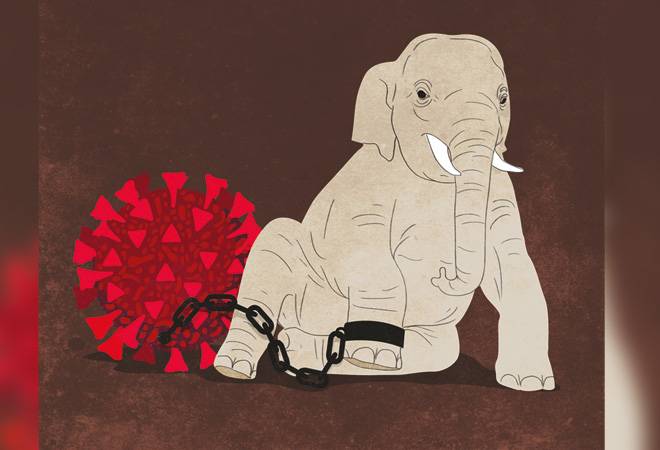 The Central government's response to the economic fallout of coronavirus has been a mix of a few procedural and compliance relaxations, liquidity injection in the banking sector through the Reserve Bank of India (RBI) and a small package aimed at the poor and underprivileged. In short, it has been tepid and cautious.

With several agencies predicting doom and gloom for the economy - the latest is World Bank forecast of 1.5-2.8 per cent FY21 real GDP growth versus 6 per cent previously - the government's response to the situation has baffled many. The size of the package for the poor and underprivileged - Rs 1.7 lakh crore - is less than 1 per cent of GDP, even when a large number of economists and experts are asking for a package that's 4-5 per cent of GDP or Rs 10 lakh crore. Even a large portion of the Rs 1.7 lakh crore package has been mostly budgeted for earlier; the government is incurring an incremental cost of only Rs 70,000-80,000 crore. And then there are bits and pieces measures such as relaxation in tax and other regulatory compliances and transfer of some pending funds to states, local bodies, etc.

Of course, the RBI has announced a series of measures like a 75 basis points repo rate cut and a 100 basis points cut in CRR, releasing Rs 3.74 lakh crore into the system. Besides, it has eased norms for working capital financing and rescheduling of term and working capital loans. The benefits are yet to be seen.

When the RBI announced a three-month moratorium on loan repayments, there was hope among individuals and small and medium enterprises (SMEs) that this will ease their pain. Soon, individual borrowers realised that if they opt for the moratorium, they will end up paying additional interest, and might have to pay even the deferred EMIs in one go. Not a deal they were looking for at a time when jobs are at stake and salary cuts are the norm. The MSME sector, one of the worst affected by the lockdown, is also not going to benefit from the RBI's liquidity injection and loan rescheduling measures. Anil Bhardwaj, Secretary General, Federation of Indian Micro and Small & Medium Enterprises (FISME), says there have been no announcements to benefit the MSME sector. "MSME sectors around the world usually have cash in hand for 15 days. All their cash is in circulation. In such a situation, the additional interest cost due to moratorium could be a challenge," he says. He is referring to the coronavirus emergency credit line that State Bank of India had extended to MSMEs just before the lockdown. Under this, the bank was offering 10 per cent additional fund-based working capital. The scheme document said no processing fees, but when the document requirements were studied properly, the businesses realised that the overall cost for availing the facility was Rs 75,000, an exorbitant sum for an MSME. On the government's promise to contribute both employee (with basic salary of up to Rs 15,000) as well as employer PF contribution for organisations with 100 or less employees for three months, Bhardwaj says only a handful of MSMEs will be eligible for this. What has worsened the situation for MSMEs is that some states have asked them to pay salaries by 30th of the month. This is seven days prior to the usual salary day, says Bhardwaj.

But what about the RBI pumping liquidity in the system and cutting the repo rate by 75 basis points? The move, hailed earlier, has not reflected in bank lending rates. The RBI governor recently said that since January, he has cut the repo rate by 135 basis points, of which only 70 basis points have been passed on to customers. Ratings agency CARE says RBI measures should have led to a decline in rates as there is excess liquidity but this has not happened due to expected heavy government borrowings because of the crisis. This means businesses, especially those with poor financial health, will not get cheaper loans. The Confederation of Indian Industries (CII) estimates that the economy will need 14-15 per cent credit expansion. Chandrajit Banerjee, Director General of CII, says instead of giving direct subsidies to industry, the government should support it through the banking sector by allowing five-six times leverage. He says the support should include working capital enhancement and funding for payment of wages and special re-construction term loans for MSMEs and stressed sectors.

Compliance Relaxation: Too Little, Too Late

The government has either relaxed compliance requirements or deferred compliance dates. For instance, it has extended the last date for filing income tax returns for (2018-19) from March 31, 2020, to June 30, 2020, and also extended the date for availing benefits under tax amnesty scheme Vivad Se Vishwas without paying additional 10 per cent tax to June 30. The last date for filing GST 3Bs for March, April and May has been deferred to the last week of June.

People in the know say these will ease the compliance burden but not help substantially. "What if my April sales were zero, which will be the case for many? How will an extension of the GST return filing date help me if my GST liability is nil?" asks Pritam Mahure, a Pune-based chartered accountant. He says the government should take other more important steps. He cites the example of credit notes, used to offer discounts on goods after supply, that can be issued till September 30 from the end of the relevant financial year. Mahure says: "A lot of retailers will be stocking goods which they will have to sell at a discount once the lockdown is over. Therefore, the manufacturer will have to issue them credit notes. The government should extend the date for issuing credit notes by a year."

Archit Gupta, founder and CEO, ClearTax, says while the government has extended the GST 3B filing dates for businesses with turnover of more than Rs 5 crore, it is still charging interest (albeit 9 per cent as against the usual rate of 18 per cent) for late filing. Businesses with turnover of up to Rs 5 crore won't be charged any interest for late filing.

A lot of compliance relaxations related to the Companies Act have also been announced. For example, no additional fees will be charged for late filing of any document, return or statement from April 1 to September 30. The requirement of holding board meetings within the prescribed interval has been extended by 60 days till September 30. Ranjana Roy Gawai, a Delhi-based lawyer, says these measures are only ensuring no prosecution for non-compliance.

However, businesses are also demanding GST rate cuts and deferment of income tax payments. The National Real Estate Development Council (NAREDCO) has asked for GST reduction across the board by 50 per cent for three months and 25 per cent for the financial year. "The final GST due should be payable in six quarterly instalments starting October 2020 with no interest. Final income tax of 2019-2020 and advance tax 2020-2021 should be payable starting October 2020 in six quarterly instalments with no interest," says the statement. Niranjan Hiranandani, National President, NAREDCO and President of Assocham, estimates Rs 1 lakh crore losses to the real estate sector from the lockdown. He says economic stimulus for all industries should be at least 10 per cent of the country's GDP.

Balance in Favour of Borrowers

The Delhi High Court recently gave an interesting verdict. It refused to classify the account of a real estate developer - Anant Raj Ltd - as a non-performing asset after it failed to make payment to the bank - Yes Bank - due on January 1, 2020, apparently on account of coronavirus outbreak. The company cited the RBI's March 27 announcements allowing financial institutions to give a moratorium of three months on payment of instalments against outstanding loans as on March 1. If looked purely on merit, Anant Raj Ltd did not qualify for the exemption as the dues pertained to January 1 and not March 1. Besides, the moratorium was allowed on standard accounts paying their dues on time till March 1, 2020. The company was already a special mention account for 60 days. Legal experts say even if there is no clarity on extending the moratorium to NBFCs and companies, the RBI's announcements have clearly shifted the balance in borrowers' favour in this case. They believe that ever since the country went on a lockdown and the government announced relief measures, courts have been lenient on the borrower.

Apart from courts and the RBI, even the government has taken steps to ensure that corporate borrowers don't get into undue trouble. It has increased the threshold of default for initiating insolvency proceedings from Rs 1 lakh to Rs 1 crore. It has also promised that if the situation does not improve, the provisions for initiating insolvency proceedings could be suspended for six months.

Though there has been no new admission of insolvency cases after March 28, it is difficult to say yet if it is the result of the government move. "It is early to say whether the governments move to increase the IBC trigger amount has had its desired effect. Yes, filings are down, but this could be because of courts being closed and general preference to steer clear of IBC in these trying times," says Ashwin Bishnoi, Partner, Corporate and Commercial Practice, Khaitan & Co. Hope the government comes out with more substantial measures soon.