The initial burst of results for the second quarter indicates a recovery, but that may be just a festive flash in the pan. 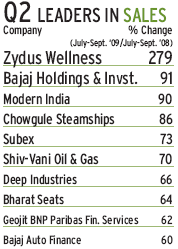 The first flush of numbers for the second quarter of the current fiscal were mostly in line with expectations as the impact of the government’s stimulus packages kicked in along with a softening in commodity prices.

For the 170-odd companies that had come out with their quarterly results, net profits increased by 19.5 per cent, while the revenues were up 7.3 per cent over the previous year’s corresponding quarter. This trend clearly indicates that focus of the companies continued to be on profitability rather than on volumes.

The slower growth in the top-line can also be attributed to the fall in the prices of commodities over the last year. For instance, crude, steel, chemicals prices have come down sharply over the last year, and for such companies, the rise in revenues will not be visible. However, low commodity prices have also reduced input costs for some companies, which has resulted in improved profit margins. The Q2 revenue figures are only marginally better than those for the preceding quarter and profits are, in fact, marginally down for the 170 companies, perhaps, indicating that it may be a bit premature to arrive at the conclusion that a recovery is underway. What’s more, most companies that rely on consumer demand have booked sales for Diwali.

Typically, such sales have an impact on the third quarter (ended December), but an early Diwali has resulted in boom times for consumer durables firms in the second quarter itself. That explains the sudden boost in profits for two-wheeler firms like Hero Honda and Bajaj Auto. Similarly, banks benefitted from robust demand for consumer loans due to lower interest rates that were dangled as carrots for the festive season. No similar uptrend trend is, however, visible in corporate lending. The recovery may have begun, but whether it can be sustained is a billion-dollar question.