On February 1, Finance Minister Nirmala Sitharaman made a Budget speech that will be remembered for its length and sobriety. It lasted for almost three hours - the longest in the history of Indian Parliament - and lacked the number games that are often associated with Budget announcements. No claims of astronomical increases in budgetary allocations, no unrealistic revenue projections. What the minister did was to present a string of measures that are expected to improve the financial health of agrarian and rural India, leave some money in hands of taxpaying citizens and improve investment opportunities for private enterprises, both foreign and domestic.

The immediate response of stock markets - the BSE Sensex ended the day down by 988 points, the steepest Budget day fall in a decade - suggests the announcements didn't match expectations, at least that of stock investors. It, though, partially recovered on January 3 by rising 136 points.

But nobody expected miracles. The country has been going through an economic slowdown. Of the four growth engines, only one, government expenditure, has been pushing growth for six quarters now. Private investment has hit a seven-year low while exports have been flat since 2013. The deceleration got worse when private consumption, including money spent by individuals on durables, automobiles, FMCG and housing, crashed six quarters ago due to reasons starting from the twin shocks of DeMo and GST and covering aspects such as liquidity crisis in banking and NBFC sectors and rampant job losses. Exports, the fourth engine, have not grown since 2013 due to reasons beyond our control.

Trade skirmishes between the world's largest economies, the US and China, geopolitical issues in West Asia and moves like Britain exiting the European Union have all made export growth uncertain. Given the fiscal constraints - reduction in tax revenues, massive shortfall in disinvestment receipts and a large chunk of the Budget already taken by committed expenditure, the only areas where government intervention, both in terms of policy push as well as resource allocation, could have helped were improving spending capacity of people and encouraging domestic and foreign enterprises to invest. And that is precisely what Sitharaman's Budget has attempted to do.

The foremost intervention has been in the agriculture and rural economy, which employs over 50 per cent of India's population and contributes over 16 per cent to the gross domestic product. Sitharaman listed out 16 short, medium and long term measures to increase incomes of rural, agricultural households, with a cumulative Budget allocation of Rs 2.83 lakh crore for 2020/21, about 12 per cent higher than the previous year's Rs 2.49 lakh crore. Most of these schemes are not new but the government has succeeded in synchronising them to develop a farmer friendly ecosystem - from village-level mechanism to store agriculture produce to taluk-level warehouses to supply chain logistics, including air-conditioned express freight trains and krishi udan (aircraft to carry agricultural produce) - to double their income.

There is the One Product One District Scheme to push horticulture production and marketing, another one to double milk processing capacity from 53.5 million MT to 108 million MT by 2025. The agriculture credit target for 2020/21 has been set at Rs 15 lakh crore, and all eligible beneficiaries of the PM-KISAN income support scheme (8.81 crore got the first instalment) will be covered under the Kisan Credit Card scheme. "The Budget allocation will aid in enhancing productivity and improving income of farmers with access to markets that will eventually help in reducing farm distress, helping the sector achieve the aspirational growth rate," says Simon George, President, Cargill India.

Yet another scheme expected to encourage consumption is an income tax regime where individual taxpayers can opt for reduced tax rates after forgoing most deductions and exemptions. Sitharaman said it could lead to a loss of Rs 40,000 crore for the Centre. Since only 9 per cent taxpayers use all exemptions, 91 per cent out of 5.5 crore taxpayers will find the scheme attractive. So, it will be money transferred to the tax payer. "The optional personal tax regime is aimed at simplification, while proposals to de-criminalise civil offences, introduce a Taxpayers' Charter and introduce an income tax dispute resolution scheme are aimed at building trust and reducing litigation," says Gautam Mehra, Leader Tax & Regulatory, PwC India.

Sitharaman has extended the last date of availing the additional tax deduction benefit of up to Rs 1,50,000 for interest paid on loans on affordable houses from March 31, 2020, by another year. The tax holiday on profits earned by developers of affordable housing projects approved by March 31, 2020, announced in the last Budget, has been extended by one more year. The moves will push house sales, key for cement, steel, tile, electrical and construction sectors, and employment.

For start-ups, the Budget has proposed deferring the tax payment on Employee Stock Option Plans, a popular way adopted by start-ups to attract and retain talent. Employees can now defer tax payment by five years or till they leave the company or when they sell their shares, whichever is earliest. This is expected to have a direct impact on consumption.

Ease of compliance is another area which can provide relief to a significant section of India's small and medium enterprises. The Budget proposes raising the turnover threshold for compulsory tax audit from Rs 1 crore to Rs 5 crore. "It will come as a welcome relief for a large number of traders," says Anil Bhardwaj, Secretary General, Federation of Indian Micro and Small & Medium Enterprises.

Social security through enhanced pension and insurance penetration, and schemes like employment guarantee programme, are meant to spread thin government resources to benefit huge sections of the society. Some, like Ayushman Bharat and Pradhan Mantri Gram Sadak Yojana, have got extra allocation too.

Another big step is an amnesty scheme to unlock huge resources stuck in tax litigation with the government and bringing certainty to financial deals and transactions for firms and individuals. Modeled on the lines of its predecessor, the Sabka Vishwas Scheme, of Budget 2019 for indirect taxes, the Vivad Se Vishwas Scheme, announced this Budget, is an offer to settle 4,83,000 direct cases pending in various appellate forums, i.e., Commissioner (Appeals), ITAT, high courts and Supreme Court, involving a massive Rs 9.41 lakh crore. Last year's scheme had resulted in settling of over 1,89,000 cases, and if the Vivad Se Vishwas Scheme can help settle even a fraction of the Rs 9.41 lakh crore, that money would flow into the economy for fresh economic activity, capacity creation and jobs.

The new scheme to promote electronics, including mobile, semi-conductors and electronic equipment, and the NIRVIK (Niryat Rin Vikas Yojana) Scheme to ease lending process and enhance availability of credit to exporters, will encourage local production. All eyes are now on the proposed National Logistics Policy to remove infrastructure bottlenecks that affect the supply side for manufacturing.

Smoothening investor sentiment has been the second area. Abolishing dividend distribution tax (DDT), impetus to start-ups, creating an enabling environment for foreign investors and sovereign wealth funds, the list is long, says Vikas Vasal, Partner & Leader-Tax, Grant Thornton India. Industry chambers CII and FICCI share the view. The proposal to transfer the incidence of DDT from corporates to individuals has been a long-standing demand. 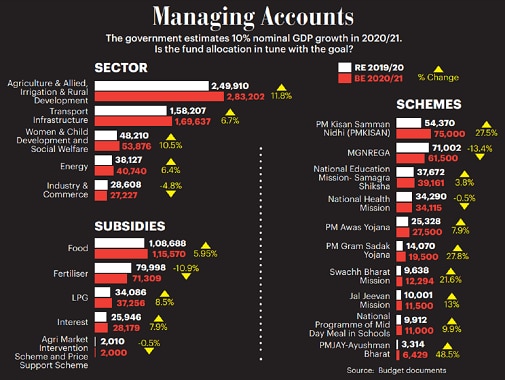 The move to allow FDI and External Commercial Borrowings in education will incentivise investment in higher education. "Given the constraints the finance minister was facing, this has been a comprehensive statement. We expect more money will be left in the hands of people that will spur consumption and industrial growth. Much of this money will go towards capital expenditure in infrastructure and agriculture - two areas that can have the maximum growth enhancing impact," says Sangita Reddy, President, FICCI.

A total of 100 new airports and 100 per cent tax exemption on all types of income in case of major FDI investments in infrastructure projects before 2024 could boost investments in infrastructure. Neeraj Akhoury, Vice President, Cement Manufacturers Association and CEO & Managing Director, ACC, says special emphasis on infrastructure development that the government has given over the past few months has been strengthened in the Budget. "The focus on project preparation facilities for infra projects and the national logistics policy that will be released soon should boost infrastructure. Priorities given to households, roads, railways, economic corridors, solar power and accelerated development of highways should boost development and wealth creation," he points out.

"The government has chosen to provide fiscal stimulus through higher spending in parts of the economy, reduction in personal income taxes and abolition of DDT. However, we are unsure if there will be any meaningful impact from the proposed alternative personal taxation regime (lower tax rates without exemptions) as individuals may opt to continue with the current regime (higher rates with exemption) or abolishment of DDT as companies may choose to simply pay higher dividends rather than reinvest in their business; most high dividend companies do not need to invest. The government has allocated Rs 4.1 lakh crore (18 per cent growth over FY20RE) for capital expenditure in FY21 but a significant portion of that pertains to capital investment in government telecom companies." The pessimistic observation made by Kotak Insitutional Equities explains both the government's approach and the stock market response on Budget day. Several experts say they are waiting to see the level of implementation.

For the time being, the government remains focused on efforts in keeping the only engine, public expenditure, on which it has complete control, kicking. The revenue projections may be subdued but budgetary allocations have not dipped for key sectors. Transport infrastructure as a whole gets Rs 1.69 lakh crore, not a huge jump from the previous year's Rs 1.58 lakh crore, nevertheless, a jump. The allocation for the energy sector has also been increased; it's Rs 40,740 crore for 2020/21, up from Rs 38,127 crore in 2019/20. Extra-budgetary resources, government bonds, etc, are also going to be utilised more in 2020/21.

For now, a lot depends on whether the current effort to revive the two growth engines - consumption and private investment - succeeds, and to what extent. And that's not just dependent on the government. Individuals need to see value in the new income tax scheme and have the confidence to spend; and industry will need to see value in the amnesty scheme and in the public expenditure push. But to the extent that there is finally an acknowledgement of the need to kick-start consumption before prodding industry to invest despite low capacity utilisation (as was being attempted in the previous two Budgets) the Budget 2020 may just do the trick.