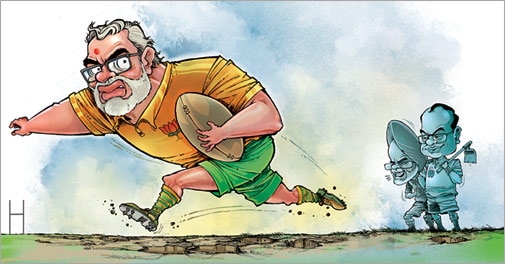 The scrum is done. The referee has called "Touch", "Hold", and "Engage". The ball is in play. The forward, with an unprecedented mandate in his hands and comparable expectations on his shoulders, makes a run towards the posts. Just then, he realises that the ball in his hands is a can of worms/hornets' nest/live bomb (insert your favourite ominous expression here).

They have a phrase in rugby: hospital pass. It is an untimely one that results in the recipient being attacked by rival players in such a vicious way that it can land him in hospital - rugby is very different from genteel cricket. The outgoing government of the United Progressive Alliance has lobbed several of those passes in the general direction of the new government.

Prime Minister Narendra Modi and his team of ministers have burst off the blocks with earnest voices. But it will take a lot more than earnestness - dexterous floor management in Parliament being one, unwavering determination another - to get past the UPA's legacy .

The new land acquisition law requires you to pay twice the market value in urban areas and four times in villages. And it came after prices had already multiplied four to five times over the previous decade. Amitabh Kant of the Delhi Mumbai Industrial Corridor says land prices are now five and a half times the market rate. Adding emotion to this equation, Navin Raheja, the head of Raheja Developers, says he would be better off not working at all.

Our intent is not to be carping Cassandras, so we will not tell you about the retro tax that has muddied the waters for foreign investors, the new Companies Law that is raising anxiety levels over operational issues, or the plethora of other laws, most of them archaic, that threaten to snuff the life out of business and trade.

Back to the field of play, the forward is in a strong position to face the tackle. He is also the kind of forward who would hate a grubber (that's when a rugby player kicks a ball and it, instead of flying towards the posts, gently rolls along the ground), and he isn't one to easily go to the blood bin (which is where a player goes when wounded and bleeding).

Land acquisition will be among Modi's biggest challenges