Move to set up an ARC/AMC as a proxy for bad bank and a Development Financial Institution is aimed at taking the load of risky assets from banks. It is easier said than done 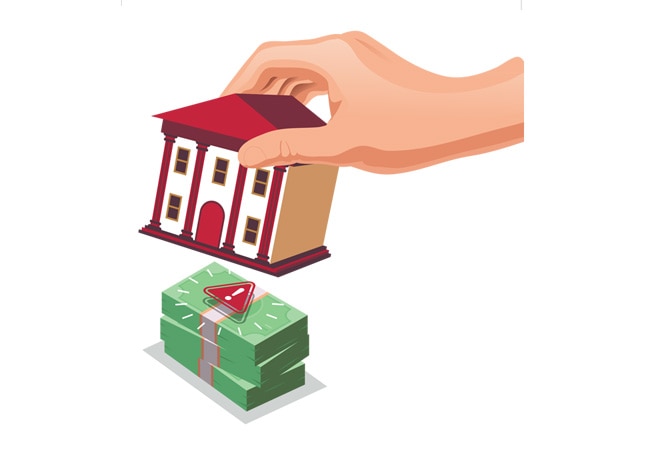 The outbreak of Covid and the resulting lockdown threatens to start a new non-performing asset (NPA) cycle that will further hit banks, especially public sector banks (PSBs), which have been finding it almost impossible to lend for long gestation projects because of asset-liability mismatches. The Budget proposals to set up an asset reconstruction company (ARC) and an asset management company (AMC) to house NPAs, apart from a development finance institution (DFI), are aimed at easing the burden of banks and getting the funds-starved infrastructure sector to fire on all cylinders.

The ARC will buy bad assets from banks and the AMC will manage and turn them around The proposed ARC/AMC will free up banks' balance sheets while the DFI will take care of capital intensive projects and enable them to focus on working capital loans to companies and support retail borrowers and micro, small and medium enterprises. The government has proposed Rs 20,000 crore capital for the DFI. "These two proposals look good on paper, but the key will be execution, management and sustainable funding," says a banker. Let's look at the challenges these two proposals are likely to face.

The good thing is that India will finally get a specialised institution to buy bad loans from banks. The banks, led by PSBs, will be the sponsor banks with no burden on government to fund the new entity. Banks will sell it bad loans at book value or discount to book value in return for upfront cash and security receipts. It will turn around the asset and then sell it. The system has enough NPAs to give it good business. Over Rs 15 lakh crore loans are under stress. "Taking over bad loans reduces banks' provisioning requirements and enhances their ability to lend to productive sectors of the economy to spur growth," says Rajkiran Rai G., the Chairman of the Indian Banks Association (IBA) and also MD & CEO of Union Bank of India. IBA has been rooting for such an institution.

For banks, it is a win-win situation. They have already provisioned for a lot of stressed loans. This means the transfer of the asset to the new ARC/AMC will not result in additional provisioning. Instead, it will free up capital for growth.

However, Aswini Sahoo, CIO of ARCIL Ltd, one of the largest asset reconstruction companies (ARCs), says the ARC business in India is fully developed. "It might save time and cost to use existing physical and intellectual infrastructure to aggregate and resolve NPAs," he says.

But experts say ARCs have not been as successful as they would have liked. One reason is shortage of capital to buy large NPAs. The proposed ARC/AMC may also face this challenge as PSBs have limited capital support from the government. Arun Singh, Global Chief Economist at Dun and Bradstreet, says India needs to find investors which can buy bad loans. "The management of the ARC/AMC should be such that it does not follow the steps of PSBs," says Singh.

Another issue is confusion created by the plethora of options for stressed assets such as insolvency and bankruptcy code, private sector ARCs and now a government-sponsored ARC. "The new ARC/AMC is just another avenue for stressed loans. It will take up large assets while mid to smaller assets may continue to be resolved by existing ARC and resolution mechanisms," says Nitesh Jain, Director, CRISIL.

The ARC/AMC may also create a moral hazard by giving banks an easy option to dispose of NPAs. "It has the inherent risk of the bank just moving its bad assets rather than working on preventing bad loans. So, we have to pay attention to its execution," says Jaya Vaidhyanathan, CEO of BCT, a global technology firm. Care Ratings says transfer of bad loans should be a one-time exercise.

This will be the second coming of DFIs. Over the last two decades, the DFI model had vanished in India as large players like ICICI, IDBI and IDFC became commercial banks because of lack of long-term funds and high concentration risk. Commercial banks, chasing high returns, stepped in to fund infrastructure and other long gestation projects. This continued for a decade before they faced severe asset quality pressure as several capital intensive sectors got entangled in legal and regulatory issues. Of late, higher delinquencies in wholesale lending have been encouraging banks to focus on just retail lending and reduce wholesale lending.

That is why the government has now decided to revisit the DFI model to support infrastructure financing. There are some good reasons why a new DFI makes sense at this stage. First, interest rates globally are low, which can help the DFI raise long-term funds. Second, capital markets are now well developed and can absorb large issuances. Mutual fund and insurance industries, which have long-term funds, have also achieved substantial scale over the past two decades and can be a good source of funds.

At present, it is not clear how the proposed DFI will raise funds as business scales up. Overseas fund-raising will come with currency risk. Asset concentration (due to focus on infrastructure) will also be a big issue as any problem in the sector will increase delinquencies.

In fact, there are already two government backed platforms supporting the sector - National Investment and Infrastructure Fund (NIIF) and India Infrastructure Finance Corporation Ltd (IIFCL). The five-year-old NIIF is a quasi-sovereign wealth fund which has mobilised close to $4.5 billion so far. It is focusing on select sectors like transportation and energy. The 15-year-old IIFCL is a non-banking finance company owned by the government. It has a loan book of Rs 1.5 lakh crore; one-fourth of its book is bad assets. There is also a proposal to merge IIFCL with the new DFI. There are lots of lessons to be learnt from these two government-backed institutions for creating a robust DFI model.

'Times They're a Changin'