From farm to firm to fork

As farmers graduate from mere cultivators to investors, it will change what they grow and what we eat.

These, and several other such instances, point to exceptional achievements and unforgiving failures of Indian agriculture during the first decade of the 21st century. It was a decade when rural prosperity increased at a faster pace than ever, but also a period when agriculture output fluctuated most wildly. It was a decade when Indian industry reached out to the farmers—both as consumers and as partners in business—like it had never done before, but it also realised that policy obstacles are still far too many to forge lasting win-win partnerships. It was also a decade when clear, though still weak, links were established between what Indians eat and what Indian farmers grow. It's this farm to fork—via-firm link that holds out hope of a complete transformation of Indian agriculture in the next decade, and beyond. 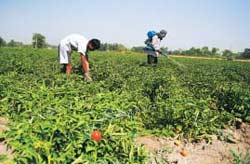 It's a transformation that will change the Indian farmers from being a passive recipient of massive subsidies (most of which work against their long-term interest) to active investors that help them build assets, cultivate what consumers (Indian and foreign) really want and get the best price for it. It will relieve the government of some of the burden of massive agriculture-related subsidies. It will truly unlock the 600-million strong rural market for Indian Inc. which is bounty to die for in itself, but which could also help India become the food factory of the world.

To understand how much of this potential can actually be realised in the next 10 years, let's understand what the last decade could not achieve and why. Corporate India's march into rural Indian was stopped or slowed for two primary reasons. The spurt in food price inflation in 2007 was at least partly attributed to companies buying foodgrains directly from farmers, often at higher than the rate prevalent in the local mandis. Though the prognosis wasn't correct, it resulted in several states re-invoking the APMC Act, which prohibited sale of foodgrains to private companies. Then futures trading in several commodities was suspended. In effect, the still fledgling farm-to-firm linkage was snapped.

Policy hurdles apart, industry, too, got distracted. The rip-roaring urban demand and the unprecedented growth in exports during 2005-2008 made rural markets a lower priority for several industries. That's no more the case, courtesy the global meltdown and a subsequent slowdown in urban demand. Rural is yet again the priority for India Inc., and why not. A large part of industry—ranging from mobile phones to two-wheelers and FMCG— has shown up impressive sales and earnings growth thanks to the rural demand.

India Inc.'s return march to rural India is unlikely to flag—like it did in the middle of this decade—because of some fundamental changes underway. More than four times increase in public rural spending in the last decade has raised rural income levels to an extent where farmers are beginning to think of themselves as investors, and not merely as cultivators. This means they are ready to pay for agriculture services and infrastructure—if they are made available to them conveniently and accurately. This represents a great business opportunity for a range of companies.

In the past three years, organised retail has opened up hundreds of stores selling fresh produce. That is remarkable aggregation of demand for a country which had almost no organised retail in fresh food at the beginning of the decade. This signals forging of a permanent link between farmer and the firms that are unlikely to be disrupted by a policy change. Says Rajesh Srivastava, Chairman & Managing Director, Rabo Equity Advisors, which runs a $100-million India Agribusiness Fund, sponsored by Rabo Bank: "The coming decade will increase the linkages between the farms and the consumer markets—both domestic and global." So Mittal's dreams of flying out jumbo loads of fruits and vegetable may just come true now.

Srivastava also expects private sector to play a major role in sprucing up the rural infrastructure, whether it is roads, power, telecom or even irrigation. The latter is most likely to come from the public-private partnership route. Then there is a small but rapidly growing linkage via technology. Hybrid seeds are getting immensely popular among farmers. The rapid adoption of Bt cotton surprised seed manufacturers and government alike. It has vaulted India into the big league as far as cotton production and productivity is concerned. Hybrid maize is another success story.

Food, along with beverage and tobacco, will be India's biggest industry for the next 20 years, growing at an average rate of 8 per cent a year. Companies like Pepsi and Nestle have ambitious plans to occupy a growing share of Indians' food palate. This can only happen— and is already happening—through direct and increasing contacts between these companies and the farmers. Of course, not every farmer will benefit from these linkages. More than 70 per cent of India's land-owning farmers have holdings of less than 3 acres. Many of them won't benefit from the growing corporate involvement in farming. For them, a more targeted subsidy and schemes like the MGREGA (see pg 62) will continue to be relevant and essential.

As Ajay Shriram of the DSCL Group, which runs the rural retail chain Hariyali Kisan Bazar, says: "The Indian farmer is a sharp, focussed, savvy businessman. The private sector has to deliver at the micro level even as the government has to put up the enabling framework for such participation to generate a winning formula for the farmers."

— With inputs from Anusha Subramanian

Welcome to the financial hypermart