India may be a tiny piece of the revenue pie for Google today, but that isn’t stopping it from expanding aggressively and wooing both web users and corporate advertisers. 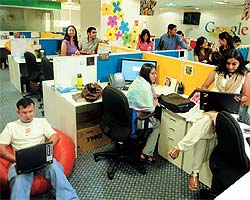 Ad sales: Busy drumming up business in the Gurgaon office

In 2008, Google generated $21.7 billion in revenues globally, almost exclusively from selling search advertising. India, however, contributed a measly $200 million—less than one per cent of that number. Yet, over the past 24 months, Google has been in a tearing hurry to get big in India.

From a few employees working in Hyderabad supporting the global AdWords operation, Google has mushroomed to over 1,000 people across the country—its second-largest employee base globally after the United States. However, India, for Google, isn’t about just developing new products, which it’s undeniably doing. The company has also realised that it is sitting on top of a veritable goldmine of online advertising.

With only 6.6 million broadband users, this goldmine might seem a long way off, but Google’s numbers in India are actually not too shabby. Its social network, Orkut, has an estimated 13 million active monthly users as of May this year. Along with the search page, video service YouTube, and its free e-mail (Gmail,) Google India claims to have four of the five leading web properties in India (the fifth being Rediff).

With an active Internet base estimated to be around 50-60 million users, recent price cuts on broadband offerings as well as cheaper mobile-data access plans have given connectivity a big boost. Auctions for nextgeneration data-rich 3G-mobile networks and Broadband Wireless Access expected by the end of the year will improve things further. Not surprisingly, global research firm Forrester Research estimates that India will be the world’s third-largest broadband Internet base by 2013. This is the market that Google is gunning for.

This market is also changing the way Indian companies are beginning to think about their customers. Even the more traditional manufacturing companies are beginning to realise that many of their prospective customers can now be lured through the Internet instead of print and television. This is big business for Google. “We have tripled our revenues in the last two years,” says Shailesh Rao, Managing Director, Google India. Online advertising (nonclassified) accounts for just five per cent of India’s annual advertising budget of around Rs 25,000 crore today, but Google India claims to have 80 per cent of that sewn up. Rao says that Google has been approached by a flood of Indian firms—from auto makers to FMCG companies— seeking help in devising a strategy for Internet advertising.

One such company is Hyundai, which is promoting two of its products—the i10 and Verna—only through online marketing right now. Hyundai’s spokesperson Rajiv Mitra says that Google actually approached them—rather than the other way around—which shows how hungry Google is to beef up its revenues.

Google has built a large ad-sales team headquartered out of Gurgaon that is busy evangelising Internet advertising to companies, big and small across India. “We see online marketing as a great exercise in brand-building,” says Hyundai’s Mitra. “Believe me, it is a lot cheaper than ‘high impact’ print or television advertising.” Why? Simply because the online campaign has measurable results. If online users click on the i10 advertisement, they fill up a form which allows a Hyundai dealer to contact them about a testdrive and may eventually convert that into a sale.

For those whose businesses are solely net-driven, it’s a simple decision. “You don’t have a choice but to advertise on Google,” jokes Deep Kalra, CEO, MakeMyTrip, one of India’s leading online travel agencies. Kalra says that his travel site still gets a significant number of hits from these sponsored links — ads placed through Google’s AdWords programme which uses an auction system to determine placement on its site— that the travel site has been using since 2004.

For InfoEdge, owners of portals Naukri, Jeevansathi and 99acres, Google advertising is a two-way street. The site also makes money from Google, according to Hitesh Oberoi, COO, InfoEdge, through its AdSense programme— where Google shares revenue with other popular sites when it places ads on their pages—but clarifies that “we spend a lot more on AdWords than we make on AdSense.” Still, attracting resumes, matrimonial profiles and real-estate listings for its various sites would be a money-bleeding, onerous affair without Google’s AdWords. “The auction system makes things a lot easier and less arbitrary,” says Oberoi.

The business of selling ad space to companies can only thrive as long as Internet users keep flocking to Google’s various sites. “India is a growing Internet market and we have to always keep on adjusting our products,” says Rao. Consequently, the company has been integrating things like railway information, bus schedules, local business listings, movies and reviews into their Search, even adding geographic information.

To aid in this campaign, Google keeps its army of engineers in southern India—under the command of Prasad Ram, Director, Engineering, Google—hard at work. The twist in Google’s product development is that you as a customer are instrumental in the creation or development of a product. A major hit is Google Mapmaker, a software tool that allows users to enter Maps data, marking out roads and points of interest. Thus, instead of licensing maps, Google is encouraging users to help out. How successful is this? Within three days of the satellite image of Lahore (Pakistan) coming out, amateur mapmakers filled in all the gaps.

Google also realises that its biggest source of cash in India could soon come from mobile Internet usage, which according to data available from the Telecom Regulatory Authority of India (TRAI), was accessed by almost one in three mobile users in India last year. No surprise then that Google has geared many of their services—email service Gmail, Google Maps and even video-sharing service YouTube—towards users in this market.

In addition, Google provides Indic language support for people who use Gmail and Google’s blogging service, Blogger. This service allows users to write a passage in the Roman script and the software created by Google will convert it into Hindi and seven other Indian languages. “There are too few Indic language keyboards available, but look at movie posters. They all have the name of the movie written in English, even if it is a Hindi or Tamil movie,” says Ram. Then, there’s Google’s mid-July launch of a voice-based search for India’s estimated 400,000 BlackBerry users, which uses a voice-recognition engine optimised for Indian voices.

Google might seem like an impregnable fortress in the Internet space, but distant dust clouds of an approaching army signal the first real duel that the company will soon be forced into. Microsoft’s new search engine Bing has already entered the market and may corner close to 20 per cent of it in the US by next year, according to some analysts. In India, both Yahoo! and Microsoft’s MSN have spent the last few years bolstering their search advertising teams—Yahoo! even bought online-advertising network Tyroo in India—and a recent Yahoo!-MSN partnership means that Bing will become Yahoo’s preferred search engine. Considering Microsoft’s mammoth warchest, which it willingly deploys in pursuit of rivals, a Google-Microsoft face-off is a sure bet.

Still, Google is in a unique position to rule over the Indian market. The company has a treasure trove of trial-and-error lessons from its other regions to lean on. Moreover, the fact remains that Google has excelled in devising products for the one category likely to soar above others in India—namely the mobile phone—simultaneously with the PC. This is guaranteed to attract even more consumers to its sites for some time to come and continue Google’s reign as the well-entrenched king of the Indian Internet domain.

How Google makes its billions