Zest for quality and bold pursuit have made Guneet Monga a much sought-after producer.
Arpita Mukherjee | Print Edition: Aug 31, 2014 Never say never: Monga's hardwork has won her accolades from one and all in the film industry. Photo: Rachit Goswami/www.indiatodayimages.com

As far as movie-making goes, be it for a producer or a director, none can say for sure what makes a movie hit. There is no formula or tenet to follow. And if this is the challenge, 30-year-old Guneet Monga seems to be the perfect bet. Her well-cherished desire is to take Indian cinema to the global stage more often. How she achieved it is more evident from the efforts she put into the production and marketing of movie The Lunchbox in 2013.

Initially when people around her in India told her that the film - an epistolary romantic one with Irrfan Khan and Nimrat Kaur in lead roles - was not meant for the youth that constitute the large chunk of moviegoers, Monga, the co-producer, was dejected. "Everybody had said that it will not even recover the marketing money and so why release it," she says. 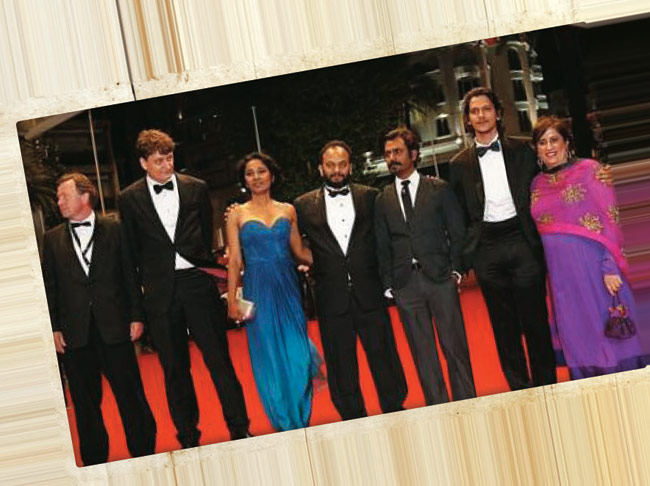 Scaling heights: Guneet Monga with her Monsoon Shootout team at the Cannes Film Festival in 2013.
Nevertheless, the movie, an Indo-French-German co-production, was released in September 2013. It was screened at the International Critics' Week at the 2013 Cannes Film Festival and also at the Toronto International Film Festival. It garnered Rs 22 crore in India and $4.5 million in the US. The production cost was Rs 9 crore to Rs 10 crore. Monga says the universal appeal of the story line helped it connect with the audience and so the masses took it upon themselves to watch the movie and draw others too. For Monga, raising money for a movie is based on the story, be it The Lunchbox, Monsoon Shootout (2013) or Gangs of Wasseypur (2012). "There is no safety net of any actor or marketing," she says.

As a producer, she has made 23 feature films, 75 short films and five documentaries, including an Oscar-nominated short-film. After her mass communications course, Monga, who hails from Delhi, initially worked as a production coordinator. She moved to Mumbai in 2006. The next year she produced Say Salaam India, a film that revolves around the passion for cricket. But on the day of the release, India lost in the World Cup and the film failed at box-office. But Monga took it in her stride and set out to recover the money. "It is a business deal and I told myself that if I don't recover the money then I cannot be doing this anymore," she says. So she went to schools and booked single screens across Delhi and Punjab. It all added up to 250 screenings and she recovered the money. Scaling heights: Monga at Marrakech Film Festival in 2012; Ashutosh Gowariker, Guneet Monga, Amitabh Bachchan, Sriram Raghavan, Rishi Kapoor, Prakash Jha, Gauri Shinde and Anurag Kashyap This pic was from the Marrakech Film Festival (in Marrakech) 2012. She had gone there to represent Gangs of Wasseypur.
This is exactly what Monga does with all her films. She gives it her all and now she also has a team working for her. In her pursuit for good movies, Monga found help from many talented people in the industry and in no small measure from director-producer Anurag Kashyap. Apart from being the co-founder of Sikhya Entertainment, a film production company, she has also been the CEO of Anurag Kashyap Films Pvt Ltd. Monga joined Kashyap during the making of That Girl in Yellow Boots (2011). There has been no looking back since then. Together they make a great team. According to Kashyap, Monga is very dogged in what she believes and works hard for it. "She will not let it go till she has done her all. It's the film that always motivates her and she has this insatiable desire to put us on the world map," he says. For the outside world, Monga says, Indian cinema is synonymous with Bollywood. And so it's tough to convince international producers and distributors about her objectives. "For me the conversations started with That Girl in Yellow Boots. Then I showed them Udaan (2010)," she says.

Her production banner, Sikhya, has its origins in Punjabi and it expresses her ideal "keep learning, keep growing". It will be the primary banner under which films are made. Her aim is to nurture first-time directors. One of them was Bejoy Nambiar, who made his directorial debut with Shaitan (2011). "Had it not been for Monga and her team, Shaitan wouldn't have been made the way it was," he says. Nambiar, who calls Monga an 'emotional producer', says she is the go-to person for any first-time director. "She is there for filmmakers who are trying hard to do something different," says Nambiar. 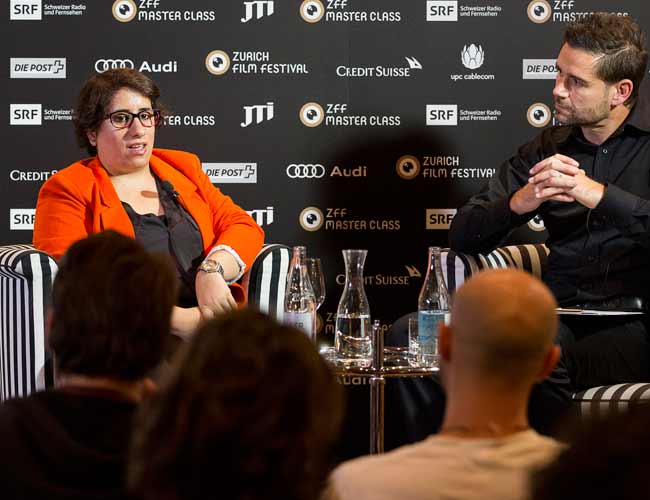 Guneet Monga at the Zurich Film Fest, Switzerland in 2013. She was invited to talk about being an indie producer.
But it has not been a cakewalk for Monga, especially in India. There are issues with taxation and distribution and there are few avenues to screen films in India, she says. "This at a time when there are some 40,000 screens in the US, and China is adding nine screens every day," she says. Despite all this, Monga is confident about the future of offbeat movies. For her, it is about adding value to the director's creative efforts. "I had to internalise the fact that I am responsible for taking this film far. That's how I succeeded in breaking into the international markets. My urge to take the films to places where it has not been screened has led to the non-diaspora distribution of films," she says. Over the last five years, she has showed up in every city that hosts festivals at least a month in advance to meet distributors and producers and share various films with them. "Just for them to see the films. Just to make them see what we are doing. I've always been reaching out to people. I believe unless you put yourself out there you won't find the best opportunities," she says. Watch video: Know more about Anurag Kashyap Films CEO Guneet Monga
The effort has so far paid off and Monga can now boast of the 'connections' she has built on her own. "I have always done things by myself and everybody I know is a personal connection," she says. With multiple screenings of films at various international forums, Monga feels that even the market for such films is fast developing. "It is about how to reach there," she says. According to her, The Lunchbox clicked as the international market was a bit ready to take a film from India. "The film was accessible and its content beautiful. It ticked a few more boxes than what other films did," she says.

Her heart lies in small films even as she aspires to be an international producer out of India. "For this, I want to strike a balance between making big-budget films and small ones," she says.

Who Cares Why, here's Our Chance!