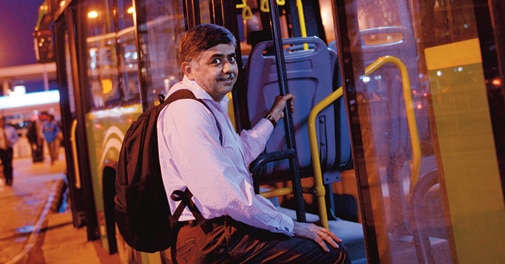 Until a few years ago, Bangaloreans hardly considered taking a bus to or from the airport. Or anywhere else in the city, for that matter. But of late people are choosing public transport, and the sight of upwardly mobile crowds and even high-profile CEOs boarding a bus has become common at the international airport. One of the star CEOs in the Tata Group, Bhaskar Bhat, swears by Bangalore's airport bus service. "I find it convenient and efficient. Every few minutes there is a bus from the place I board."

Bangalore, and by extension, Karnataka are together setting an example for the rest of the country. Union Urban Development Secretary Sudhir Krishna recently asked other states to emulate the southern state for the "high standards" it had set in road transport. Bangalore, for example, has 670 Volvo buses deployed on the city service, 67 of them exclusively for airport service.

Buses were the only mode of transport for vast sections of people until India opened up the economy and dismantled licence raj in 1991. In the two decades that followed, the market was flooded with two- and four-wheelers as people suddenly found private vehicles more convenient. But the leap in the number of private cars led to congestion on roads. Now, with many cities offering air-conditioned buses and metro rail systems , people are heading back to public transport to save on time, energy and ever-increasing fuel costs.

Click here to Enlarge
Transport specialists say one of the main reasons for people returning to buses is the Jawaharlal Nehru National Urban Renewal Mission (JNNURM), a government initiative to improve public transport. Bus manufacturers, too, are expecting big orders in the months to come as the Urban Development Ministry rolls out new buses under the JNNURM's second round of bus sanctions. Smaller cities such as Raipur, Indore and Coimbatore are building exclusive lanes for public transport and are likely to ask for more air-conditioned buses. "About 13 cities in India are using our buses for urban transport, and Bangalore is the most effective among them," says Akash Passey, Chairman, Volvo Buses India. His company is getting relatively more orders for its high-quality buses from southern and western India.

The Urban Development Ministry plans to sanction a fresh lot of 10,000 buses. "People's perception of public transport is changing after the launch of JNNURM and SUTP (Sustainable Urban Transport Project)," says Jinson Koottungal, Transport Specialist at the government's SUTP in the Urban Development Ministry. "In the past six years, the number of people using public transport has increased about six per cent," he says.

According to a performance review of state road transport undertakings (SRTU), the number of passengers carried by 38 major SRTUs rose 1.2 per cent in 2011/12. Andhra Pradesh, Karnataka, Maharashtra and Tamil Nadu accounted for 66 per cent of the total fleet held by 38 reporting SRTUs.

Gurgaon - the city in the national capital region with the third highest per capita income in India - stands out for its metro system, built with private sector investment. Infrastructure firm IL&FS has invested about Rs 1,100 crore in the Rapid Metro launched on November 14. It is used by more than 15,000 people - about 60 per cent of them from Delhi. "We have started work on Phase 2 which will increase intra-city connectivity within Gurgaon. We are hopeful of starting commercial operations of Phase 2 by 2016," says Sanjiv Rai, Managing Director of Rapid Metro Gurgaon Ltd.

Commuters are hoping Gurgaon's Rapid Metro will revolutionise public transportation the way Delhi Metro has changed life in the capital. Delhi Metro set a record on August 8, 2013 when its trains ferried 2.5 million commuters in a single day - its highest number so far. With a network of 190 km, the service, launched in 2002, has already become the backbone of the city.

"The metro is a lifeline for people who do not have cars. Those who do might prefer it as it reduces traffic woes and saves time," says Ratnika Vyas, an advertising professional working with Lowe Group's Delhi-based agency, Pickle Lintas, who takes the metro every day from her Noida home to her Gurgaon office.  "The best part is one gets to travel in air-conditioned coaches. One can use those commuting hours to read, and plan one's day. And you could end up making good friends during a metro ride, besides meeting old buddies."

The financial capital, Mumbai, runs largely on its suburban train system, but the massive metro rail network it is building in partnership with Reliance Infrastructure for the first two phases will strengthen its public transport system. Similarly, metro project work is underway in Bangalore, Chennai, Hyderabad and Kochi. For the people of these cities, that is the best news ever. ~

IT product companies are gaining traction in India