How retailers can make the best of a slowdown

Moving quickly to improve performance can help retailers recover faster. This recent McKinsey paper, based on the experience of US retail industry, has lessons for organised Indian retailers who are faced with a slowdown in consumer demand, just when they are investing heavily in expansion.

Downturns are tough on retailers. Recent McKinsey research indicates that during the last two recessions (1990–91 and 2000–01), growth slowed for nearly every retail sub-sector in the United States. 93 per cent of the retailers surveyed that existed during both downturns experienced slowing revenue growth in one of them, and 59 per cent endured it in both.

Unfortunately for retailers, their position on the front lines of consumer spending doesn’t translate into a rapid turnaround when the general economy experiences a subsequent uptick. The average retail subsector growth rate during the first year of recovery following the 1990–91 and 2000–01 downturns was 0.3 per cent. And 12 of 15 retail sectors lagged behind even that rate of growth during one or both upturns.

These downturn dynamics—declining sales followed by a sluggish recovery—mean retailer should move quickly to minimise performance deterioration. The challenge, of course, is that retailers have a large number of options to sort through, ranging from cutting costs by shutting stores or restructuring support functions, to increasing revenues by refreshing stores or overhauling promotions. Many make the mistake of focussing on what is easy or known to them and fail to tackle more challenging goals that might improve their competitive positioning during the inevitable upturn.

In our experience, some basic rules of thumb are invaluable for helping retailers rapidly sort through their options and set priorities for action—in particular, determining whether to take an offensive or defensive approach. Combining a tough self-assessment with a hard-nosed scan of the environment can help retailers decide on the relative importance of reducing costs, increasing investments, creating financial flexibility, and seeking near-term revenue growth (see Analysing Options for Retailers During a Downturn).

Retailers should start by taking a rigorous look at the health of their balance sheets, management teams, and overall operating performance. Companies with reasonable cash reserves and ready access to credit lines, for instance, have options—such as investing in stores, people, or acquisitions—that weaker competitors simply lack.

At the same time, retailers need to be realistic about the potential of their businesses. Do they operate store formats or play in a sub-sector with strong growth prospects? To what extent is the market already saturated, and where does the retailer stand versus competitors? Recent growth rates, market penetration figures, and a serious review of the strengths and weaknesses of competitors are all important factors to consider. 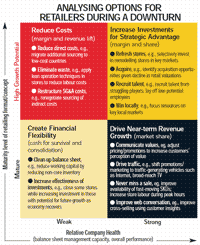 Click here to Enlarge
Companies with good financial strength in markets with significant growth potential should lift investments to gain strategic advantage over competitors. Big bets, such as doubling down on new stores or remodelling old ones, are one possibility. Equally important are smaller bets, such as recruiting talent from weaker players or investing in more precise local market execution. For example, when one specialty retailer began suffering from declining foot traffic in its stores, the company built an analytics tool to help merchants and members of the central marketing organisation more effectively use data from customerrelationship-management (CRM) and transaction databases. This allowed the retailer to better predict local demand and decide which items should receive how much space in its advertising circular. Comparable store sales have risen between two and four per cent in test markets employing the new promotion-effectiveness tool.

Retailers with good financial health in mature industries can also go on the offensive, taking actions to quickly grow revenues by driving traffic into stores through more compelling offers and ensuring that staff is ready on the floor for the assisted sale. For example, a North American soft goods retailer has reversed declining sales, improved customer satisfaction, and increased the frequency and average size of transactions by focussing on eliminating out-of-stocks, raising the effectiveness of front-line sales people, and making small store layout changes that help customers find the goods they want.

Companies with weaker financial health will need to focus more aggressively on reducing costs. Our recent experience suggests that weak performers have major opportunities to rationalise inventory stock keeping units (SKUs)—freeing up working capital—and to renegotiate terms on direct sourcing. These companies can also increase shop-floor efficiency, an area where they frequently lag. By applying lean operations techniques to redeploy labour, they can shorten the time staff spend on non-customer-facing tasks and increase the time spent helping customers. The focus should be on getting more from existing sales resources, not just on cutting labour hours. Indeed, the key driver of economics is sales— not just cost as a percentage of sales.

More broadly, retailers should bear in mind that the least effective thing to do during a downturn is to simply “hunker down” and “weather the storm”. Though there’s no escaping some pain, moving quickly to improve performance can reduce the odds of a deep dip in sales and position retailers to participate fully in the inevitable upturn.
TweetYoutube