Weaving in the North East: Cottoned on to Cotton

Four years ago, Ritika Mittal could no longer ignore her inner voice, which had been nagging her to move out of her comfort zone and do more.

Her zone was comfortable enough. She had left Jalalabad, in Punjab, where her parents still live, for Mumbai in 2000 and become a documentary filmmaker. From there she moved to the more glamorous world of reality shows and joined Indian Idol's team of producers. She had a home in Bandra, which signalled she had attained a certain degree of success.

All this because she has made it her mission in life to revive cotton weaving in the North East . Her reward is the success of the Mora collection, which sells out within days without a paisa spent on marketing or distribution. It is sold on Facebook and at an exhibition in Bangalore. Last year she wanted to take it to an exhibition in Mumbai, but there was nothing left to display there, all of it already sold. 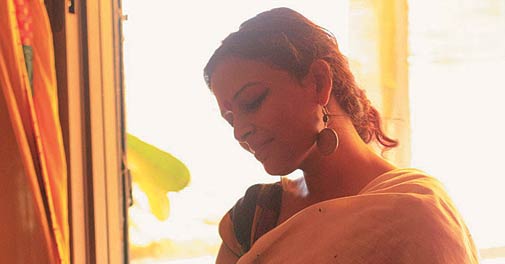 Founder of Mora, Ritika Mittal, in a mora creation
Mora happened by chance. Her first foray, after giving up Indian Idol, was into Lucknowi chikan embroidery, which she took to Mumbai's Kala Ghoda festival. One day, while she was winding up her stall, someone asked her what she would do next and Mittal responded that she would go to the North East. It came out of nowhere, and she decided to follow the impulse.

Once in the North East, she saw an abundance of beautiful weaves on synthetic. The region had a tradition of cotton weaving, but, to Mittal's horror, it had nearly died. She knew she just had to revive it. Decision taken, Mittal set out to defy the odds, of which there were many. The insurgency in the region is well-documented, but that was just one of the obstacles. Mittal knew nothing about the people of the area. Everyone told her to give up, that there was not much to do there, and she was being a fool chasing a dream that could cost her life.

Her first stop was at the textile ministry in New Delhi to learn more about the textile heritage of the North East. She also fired emails to craft councils. All she got as response was an outdated database of weavers of the region. Very often her letters and emails went unanswered. "I was baffled by their 'collective silence'. The North East was just one big black hole," she says.

That was when she strapped on her backpack and set out to explore the black hole. She hopped on to buses and shared Sumos, walked for days, and took the ferry where there was no road. One day on a bus to Jorhat she ran into Iva. They shared their stories. Iva gave Mittal a place in her home in Jorhat, where she stayed for weeks.

The trek through the North East has now become an annual ritual, as Mittal goes looking for cotton weavers. It is not an easy search. There are looms in every other household and women dedicated to weaving traditional designs. Everything is like it had been for decades. Except for the yarn, which is synthetic. There is very little cotton to be seen - not on the bodies, not on the looms, and not in the fields.

How would it be? There is no government incentive to weave cotton. The market for cotton yarn is small. Synthetic yarn costs half of what cotton does and is easily available. The elasticity and strength of synthetic makes it much faster to weave than cotton. Wages are therefore lower on cotton, in proportion to the output. Since cotton is no longer produced in the region, it has to be brought from outside, making it more expensive.

"I realised that the last cotton weave had been done about 16 years ago. The new generation does not know how to weave on cotton. I have been waiting for a cotton weave shawl for two-and-a-half years. What would take 10 days in synthetic takes a year in cotton," says Mittal.

But her annual odysseys have done their bit. Hers will never be an organised effort, but she has found some method in her madness with a loose network of cotton weavers. There are no deadlines for the weavers. At times there are as many as two dozen of them and then there are months when the number is down to one. But, slowly, surely, cotton is finding its way back to the looms.

Mittal's unorganised workforce produces about 200 pieces a year. She uses natural dyed Eri silk, Mugha ghicha, and tribal weaves on mulmuls, chanderis, and kalamkaris. The dyes are natural, "I see a particular red on a flower; if that's the colour I want, I extract it and use it." She designs and manufactures the pieces herself, with some help from her mother. The stitching is done in a unit in Jalalabad.

It is not a lucrative venture. This year, before her collection went up for sale, she had Rs 3,000 left in the bank, but she manages to pay her bills and save for the next year's journey. Which must begin every November.

Technology for the masses: A revolution gathers pace