The clout of the conglomerates

Diversified business groups may be out of fashion among investors elsewhere in the world but not in India
N Madhavan | Print Edition: Nov 9, 2014
RIL Chairman and Managing Director Mukesh Ambani .

In developed countries, conglomerates are dying fast. Investor preference for a focused, standalone company over diversified businesses (the former, they perceive, generates more shareholder value) have seen conglomerates there splitting into many smaller companies. Whatever conglomerates that survive today trade at six to 12 per cent discount. But conglomerates seem to still thrive in some Asian countries - South Korean Chaebols like Hyundai and Samsung, for instance. 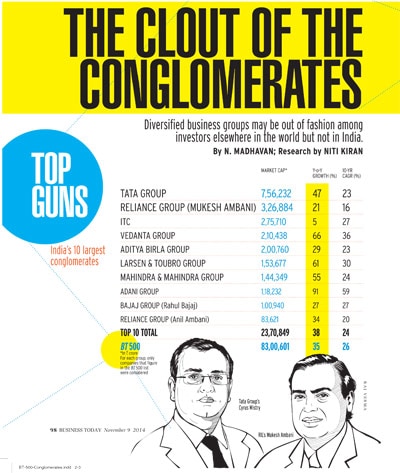 Indian conglomerates have also managed to get a better than average BT 500 valuations. In 2013, their market capitalisation grew by 13 per cent as against six per cent all the BT 500 companies registered. This means investors paid almost double the price for stocks of conglomerates compared to 2012. Two models of conglomerates exist in India. One is the business group model, with a holding company and many listed/unlisted entities in various businesses. The other is the multidivision companies, which house various businesses as different divisions within the same entity. The Tata Group, M&M, Aditya Birla Group, Vedanta, Adani, Bajaj Group, and Reliance Group of Anil Ambani fall under the business groups category, while Reliance Group (Mukesh Ambani), L&T and ITC come under multidivisional companies. In the developed world, the few conglomerates that remain, such as GE, have the multidivisional company model.

Among the two models, business groups have shown better performance. Both in terms of year-on-year growth for 2014 and a 10-year compounded annual growth rate, business groups have delivered far better results than multidivisional companies. Market capitalisation of conglomerates that embraced the business group model among the 10 top conglomerates have seen a 47 per cent yoy growth in market capitalisation in 2014 compared to 21 per cent for multidivisional companies. They have managed to do so based on stronger performance, both yoy and over a 10-year CAGR. 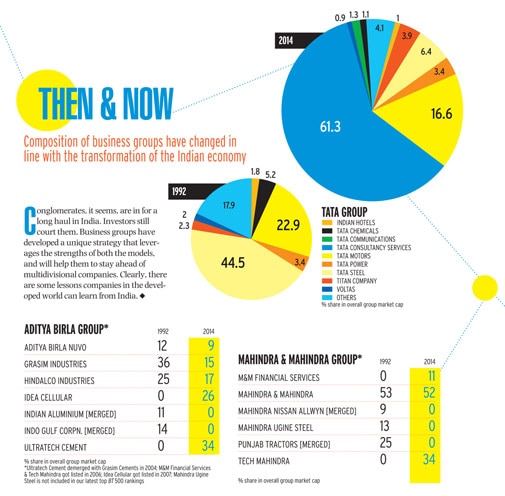 Click here to Enlarge
Multidivisional company model of conglomerates typically suffers a discount in the market for many reasons. First, the investors fear cross-subsidisation. In a company there could be a few profit-making as well as loss-making businesses and one could cross subsidise the other and this could result in overall reduction in value creation," says K.S. Manikandan, Assistant Professor at IIM Trichy, who has researched extensively on business groups.

Another reason is resource allocation. "When there is a centralised resource allocation as it happens in a multidivisional company, dominant logic of the manager takes over. Some businesses which they are comfortable with will get the necessary resources while others may suffer," he adds. Managing employee expectation is also difficult in a multidivisional company. On the contrary, business groups have separate companies with focused management and each of them raising resources on their own in a transparent manner.

But multidivisional companies do have their advantages. Individual divisions find it easy to raise capital on the strength of the large corporate balance sheet, there is stability in business and synergy can be effectively tapped. Manikandan says that Indian business groups have found ways to get the best of both the models. "They have managed to get a firm-level focus and group-level synergy by putting in place systems and processes like a group centre," he says. The Tata Group Innovation Forum is one such effort that attempts to combine the innovation prowess of the entire group.

Interestingly, the composition of business groups has seen a significant change over the years. In 1992, when India just about opened up its economy, the core sector and manufacturing was the main stay of most conglomerates. Today, services have come to play a dominant part.

Conglomerates, it seems, are in for a long haul in India. Investors still court them. Business groups have developed a unique strategy that leverages the strengths of both the models, and will help them to stay ahead of multidivisional companies. Clearly, there are some lessons companies in the developed world can learn from India.

'Firms need to find ways to repay their debt'