In no man's land

More and more women are displaying a flair for starting up on their own.

The genesis: A B.Tech from Calcutta Science College, Chakraborty did stints with Tata Consultancy Services (TCS) in India, the UK and Switzerland, carrying out onsite and offshore IT project coordination and delivery for European customers. “I come from a family of self-employed persons, so it was a natural progression for me to create an organisational brand,” recalls the daughter of an income-tax lawyer father and a singer mother. Chakraborty set up MSR in August 2005 in the UK and established an Indian presence in May 2006.

Numbers of note: Start-up capital of Rs 20 lakh was sourced from personal savings, with an employee count of two. While 2005-06 saw a turnover of Rs 10.30 crore, 2006-07 raked in Rs 21 crore with 85 employees on the payrolls once the Indian outfit, MSR IT Solutions, was started. Now, with the setting up of a software development centre in Kolkata’s IT hub, Salt Lake, Chakraborty is aiming at Rs 100 crore in revenues for 2007-08.

XY factor: Husband Shamit Dutta, also a techie, is a Director in the company.

Wo(e)man moment: “There have seldom been any experiences of gender related bias. The global customer is focussed only on the quality of deliverables and reliability. Any incidents of male bias have only been where people expect a male stereotype instead of a woman entrepreneur.”

The genesis: The entrepreneurial itch was always there, says Bhawnani. “At one time, I wanted to start a restaurant of my own and during the MBA days was focussing on that front. However, I was also interested in a clothing line and when it came to taking a decision, I felt garments had more scope; the business required less capital investment and offered more opportunities to branch off in Indian retail as well as the export market,” she recalls. 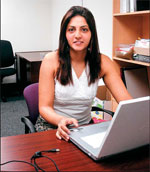 So after passing out from ISB in 2004 and spending a year with a private equity firm focussed on real estate, Bhawnani set up her own shop, Vinegar Exports, in 2005.

Company she keeps: Vinegar is into garment exports—both men’s and women’s range —to the US where the garments are sold through discount stores.

Numbers of note: With an initial investment of Rs 8 lakh and five employees, Bhawnani has raised her turnover from under Rs 50 lakh in 2005-06 to Rs 2 crore in 2006-07; currently has an order book worth Rs 5 crore for 2007-08. She now has 20 full-time staff and 120 workers on a contract basis. She has also co-opted another partner, Tarannum Husein.

XY factor: None so far.

Wo(e)man moment: Plenty, sighs Bhawnani. “Being new in the business and that too a woman, people do not take timelines and commitments at work seriously. Money matters are always an issue as they feel that you are not here to stay; I’ve had people not trusting me with cheques and asking for demand drafts,” reminisces Bhawnani.

She recalls an incident when she had to take delivery of a Russia-bound shipment from a garment factory. “The owner refused to give delivery, insisting on being paid. When I gave him a cheque, he insisted on cash or demand draft. Please note this was a Saturday night, around 11:30 p.m.,” she points out. In addition, she says the contract workers also tend to be dismissive of a woman boss. Do looks matter? They do provide a head-start but can be a hindrance when the client is only focussed on that. “You have to be bold and pretend to be a man to get business running in this country.”

The genesis: Bhalla’s work experience in the media and advertising space for seven years along with a B-school stint at Narsee Monjee Institute of Management Studies (NMIMS) convinced her that she had a winning idea in her head—branded entertainment. “My experience with Sony Entertainment Television and SET MAX told me that there was a chasm that needed to be filled, in terms of movie marketing,” she points out. 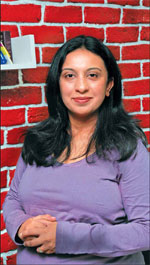 This included inmovie and in-programme placements as well as celebrity management. “I got in touch with Sooraj Bhalla, who was Executive Producer for Shararat, and asked him for his contacts in the film industry.

That’s how Teamworks came into being,” she recounts. Sooraj Bhalla, then her partner in business, went on to become her partner for life. Their first project, Shahrukh Khan’s Chalte Chalte, established them in the still-nascent industry, prompting other biggies in the media buying space to set up their own entities. “After a year of operations, we felt the market was getting institutionalised and that if Teamworks stayed single, it would hamper its growth,” says Bhalla, explaining the sell-out to Madison.

Numbers of note: Teamworks fp&e was launched in 2002 with an investment of Rs 15 lakh—funded entirely by Darshana— and two employees. In 2004, with a turnover of Rs 6 crore, it became a part of Madison and clocked revenues of Rs 20 crore in 2006-07 with the help of 16 employees. Bhalla and her husband are also stakeholders in MATES.

XY factor: Husband Sooraj Bhalla, in his capacity as a consultant.

Wo(e)man moment: “None,” emphasises Bhalla. The advertising industry, she says, is very open and accepting of women and she hasn’t come across any gender bias during her work life. “And it’s not like people will be less forgiving if you make a mistake,” she quips.

In the Fitness of Things

The genesis: A qualified nutritionist, Mogre decided to put her education to good use—both for herself and for other people. “I had put on 31 kilos during my pregnancy and it took me a year to lose that weight,” she reveals. Mogre, who started off as a fitness trainer at a club, became famous as a personal fitness trainer to Bollywood’s power pack. 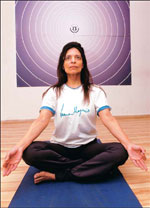 The idea of being a fulltime entrepreneur germinated during her stint as CEO of Gold’s Gym from 2003 to 2006. Last year, she launched her own centre, eponymously branded Leena Mogre’s Fitness.

Company she keeps: Besides running fully-equipped fitness centres, she runs training academies under her own name.

Numbers of note: Invested Rs 10 lakh for her first independent project, a gym in suburban Mumbai. “Each gym requires an investment of Rs 1.5 crore for the equipment and the interiors and about three months to set up,” she informs. Starting off in January 2006 with one gym and 20 staffers, she now has two operational fitness centres in Mumbai, another three are in the pipeline—one in Thane and two in Bangalore—and has 60 employees on her payroll. Her first year’s turnover stood at Rs 1.2 crore.

Wo(e)man moment: None at all, she states emphatically. Point to note: The lady is a trained kickboxer as well.

The genesis: Failure, quite literally, became the starting point for Lekhi’s venture. After flunking her first-year college exams, she decided to familiarise herself with interior design and screen printing.

The latter gave her an opportunity to design handbags, made from canvas sourced from the local wholesale market. “I also wanted to prove something to my teacher at Sophia Polytechnic, where I was studying, who felt I would come to no good,” Lekhi quips. And while she began well over 20 years ago, it was, as she puts it, just a hobby till about four years back when she realised the potential of her business—after attending a professional insight programme—and took it seriously.

Company she keeps: As the name suggests, Baggit is into bags, having sold over a million of them since inception. The product portfolio also includes belts, laptop cases, caps and scarves; Lekhi recently also ventured into men’s and children’s accessories as also footwear.

Numbers of note: She started with just Rs 7,000, and raked in Rs 5 lakh in the first year of operations in 1985-86. Her last reported turnover —for 2006-07—stood at Rs 7 crore and she expects to close the current fiscal with Rs 15 crore. Starting off with one tailor, she today employs 50 full-time staff and another 450 job-workers in her factory. XY factor: None at all.

Wo(e)man moment: None really, she states.

The genesis: An accidental retailer—she wanted to be a cinematographer—Nisha Somaia’s disillusionment with not finding the right fit for herself in western wear could probably make for an apocryphal story on how she got started. And to an extent, it could be true, considering she is a plus-size herself. “The Indian women’s body structure is very different from her European or American counterpart, which is why western wear sizes need to be adapted for an Indian fit,” explains Somaia. In May 2001, Somaia opened her first Revolution outlet in Delhi’s Shahpurjat area.

Company she keeps: Can rightfully claim to have pioneered the concept of ‘plus-sized’ fashion in western wear for women in India.

Numbers of note: Her Rs 12-lakh investment—scraped from personal savings—in the first year saw her earn Rs 18 lakh in revenues while fiscal 2006-07 saw earnings of Rs 11.5 crore with an employee count of 160. Revolution now has 12 stores, including one in Dubai, and three more are coming up in Ludhiana, Chennai and Bangalore by the end of the year.

XY factor: Husband Pranay, who joined her after six months of the opening of the first store, looks after finance and production.

Wo(e)man moment: “People thought we were complete nuts, with even my family members saying I will lose the money,” Somaia reminisces.

The genesis: The IT connection has been inherited, through her father. After doing her post-graduation in marketing from the UK and working there for a year with Barclays, Nagpal returned to India in 2002 to assist her father in his company Navision India, which distributed Microsoft’s base ERP application Navision in India. 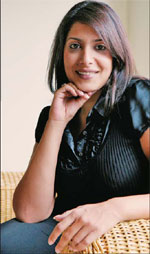 With the distribution rights being transferred to Microsoft in 2005, Navision came under the Microsoft Business Solutions portfolio. “During my stint at Navision, I realised there was a huge opportunity across verticals for software solutions,” explains Nagpal. And so Dynamic Vertical Solutions (DVS) was incorporated in 2006.

Company she keeps: DVS provides end-to-end integrated and adaptable business management applications that offer comprehensive solutions to organisations of all sizes across all industry sectors. Currently it is focussed on the retail sector and has just branched off into the hospitality segment. Its principal partners are Microsoft (for its business ready software Microsoft Dynamics), Landsteinar Strengur (for their LS Retail and LS Hospitality software) and Cenium (for hospitality specific software).

Numbers of note: Nagpal started with an investment of Rs 4 crore, excluding the cost for the premises. Turnover was Rs 5-10 crore for year ended March 2007. She currently has 40 people on her payrolls, plus another 25 channel partners and another 25 customers.

XY factor: None so far. “Unless you want to factor in my male employees,” she jests.

Wo(e)man moment: “As a woman, you need to have the same mental strength as a man, though women do have the advantage of better understanding people,” says Nagpal.