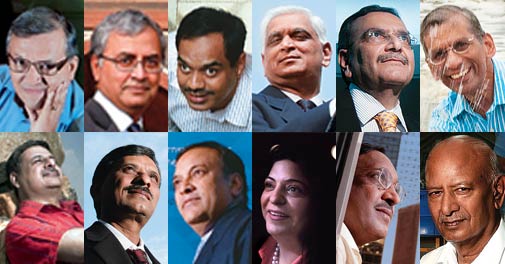 Date: April 28, 2011. Scene: Guido de Boer, Chief Financial Officer, United Breweries, answering queries from analysts on a conference call, soon after announcing his company's fourth quarter results.
Analyst: Why don't we see the company benefitting from the high beer consumption after the cricket World Cup win?
Guido De Boer: In general, the impact of such events on beer sales is grossly overestimated……. the real impact is of the weather. Analyst: How does that affect sales?
Guido De Boer: Summer time purchases are a bigger driver.
Date: May11, 2011. Scene: Similar. Adesh Gupta, CFO of Grasim Industries taking analysts' questions.
Analyst: Do you have any feedback to show cement demand is accelerating? Which regions?
Adesh Gupta: See if India has to grow, the infrastructure has to grow and if infrastructure grows, cement has to grow and ...

Guido De Boer and Adesh Gupta did not have their high profile bosses - Vijay Mallya and Kumar Mangalam Birla respectively - by their side when they took the above questions. Mallya and Birla were elsewhere, confident that their CFOs were more than capable of defending their companies' performance and spelling out future strategy. This was not an exception; they have stopped attending results announcements of their companies, as have many other industry heavyweights. Boer and Gupta are representative of modern day CFOs who have become the public face of their respective companies. Their role goes way beyond preparing the company balance sheet. They are more like business partners of their CEOs. It is a dramatic change from the time, not so long ago, when the CFO sat in a corner during result announcements, speaking only if the CEO or Chairman who was presiding asked him to.

"The CFO is no longer just a number cruncher," says Sridhar of Pfizer. Over the years, the role of a CFO has evolved from being a bookkeeper to that of one who raises resources, meets compliance and regulatory requirements, and handles investors. "The last role broadened after 2008 (when the downturn struck)," Sridhar adds.

If the role has expanded, it has become much more challenging as well. The biggest of such challenges are the shorter business cycles. Commodity prices have become volatile, interest rates change and currency fluctuations are frequent and unpredictable. "What used to be a threeto-four year business cycle in steel, refineries or shipping has become a six-month cycle," says V. Ashok, Group CFO of Essar.

For the second year now, Business Today and YES Bank have got together to pick the best CFOs in the country - the ones who best succeeded in finding the balance between company growth and meeting shareholder expectations, while keeping input costs down during the difficult financial year of 2009/10. As was the case last year, we have several categories, but Y.M. Deosthalee, CFO of the behemoth Larsen & Toubro, emerges the overall winner.

"We have consciously worked at removing risk from our businesses over the last two years," says Deosthalee. "Thus despite large variations in foreign currency and commodity markets, we have managed to maintain our operating margins."

A noticeable feature of the last two years has been that of the CEO devolving the task of protecting the company from the impact of adverse external developments to the CFO.

Policy flip-flops continue to plague infrastructure sectors such as real estate or telecom. Sometimes there is a temporary paralysis in government, and key decisions are kept pending. At other times, unexpected environmental concerns arise or the Central Bureau of Investigation starts a probe. Such things have serious financial implications for the companies involved. "Suddenly CFOs have to be very savvy about legal matters," says Praveen Sood of Hindustan Construction Company, one of whose subsidiaries, Lavasa Corporation, is losing Rs 1.5 crore every day, because the Union environment ministry has stopped work on its development project at Lavasa, 90 km from Pune.

In the difficult economic environment of 2009/10, with the downturn receding but leaving behind major problems, there were bigger challenges of managing leverage as well as liquidity. "A CFO is no longer raising money from retail investors, but from sophisticated institutional investors who actually look at how confident the CFO is about the future," says Ashok of Essar.

Sood of HCC says: "A CFO has to take a great deal of interest in every aspect of his company's projects, right from the time of the bidding to incorporate all possible future risks." Take Bharti Airtel, which has emerged winner in the Leverage Management category, or Maruti Suzuki India, which won in the Liquidity Management category. Bharti's strong balance sheet enabled it to tie up funding for its massive 3G and Broadband Wireless Access spectrum bids. Maruti has a strong working capital cycle management with almost 75 per cent of its components manufacturing being outsourced.