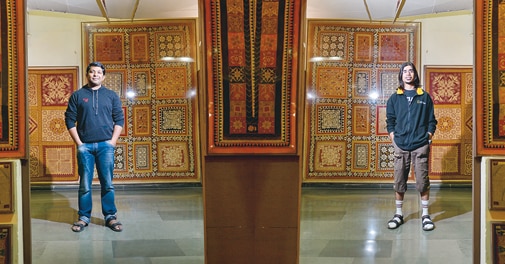 It is an unusual setting at an apartment-turned-office near Golf Course Metro Station, a plush locality in Noida, a few kilometres from Delhi. Most start-ups in India, even global ones, have their software development centres playing out of Bangalore and sales team spread out elsewhere. But in the case of Threadsol Softwares, it is the reverse. The development team of three coders - Manasij Ganguli, Abhishek Srivastava and Bratish Goswami - is in Noida, and the sales office is in Bangalore.

The story dates back seven years, when they were all working together at Noida-based Impetus Infotech. The trio often cajoled each other to start up on their own, but the actual leap of faith came much later when Ganguli had a chance to vet his technical skills at Silicon Valley based data analytics company Terracotta. "The start-up was bought out for $80 million, a terrific exit," says Ganguli. The place was electrifying. "It was a heavy duty technical place to work at."

Ganguli's idea to start up took shape back home when spouse Mausmi Ambastha, a former professor at National Institute of Fashion Technology (NIFT), wondered if technology can make garment manufacturing units - over 8,555 of them in India as per Apparel Export Promotion Council (AEPC) - much more efficient. Fabric accounts for about 70 per cent of the operational cost of garment manufacturing units, where the average amount of wastages can wary from eight per cent to as high as 16 per cent, largely because the length and width of cloth varies across mills, among other factors.

intelloCut, the software developed by Threadsol Softwares, helps garment manufacturers cut down fabric wastage right from the purchase of the fabric to getting the garment ready. So a semi-literate worker at a factory can punch in basic details like sizes of garments to be made, length and width of fabric to be used and can get suggestions in terms of the most economical ways to make use of the fabric.

The start-up has netted some early customers including big names like Aditya Birla Group-owned Madura Garments and Indian Designs, which will be deploying the solution across their factories by April this year, Noida-based Paragon Apparels and Bangalore-based FCC Bang Group. The company is aiming for 17 customers by April and pull up revenues from $125,000 until January 2014 to reach the million-dollar mark in a year and half.

Customers are happy. "We are seeing a cost saving of 2-2.5 per cent per month," says Rajiv Jasuja, Chief Operating Officer at the Rs 200-crore FCC Bang Group, which produces its own brand of shirts called Thomas Scott and is also a supplier to brands like Arrow and Lifestyle. That can be a huge saving. "Wastage accounts for about Rs 18 lakh per annum," he adds.

"The initial friction on accepting the product was high because we are entering a new market segment - garments with a software solution. The biggest challenge before us is to show managers that it works as a science, it is repeatable and scalable," says Ganguli, CEO of Threadsol, who offers the solution both as a cloud-based Software as a Service (SAAS) service wherein companies pay per use, or an on-premise solution for which companies pay a licence fee. "The larger idea is to expand the usage of the software across similar industry segments like footwear, upholstery, technical textiles and bags," says Ganguli.

Garment manufacturing is a green-field area for enterprise software, but the timing is right - India's garments sector is currently on a high. According to AEPC, India exported about $12 billion worth garments from April 2013 to January 2014, 16 per cent more than in the same period last year. More than 90 per cent of the units are export driven. However, penetrating the garments industry with a technological solution will be a very tough nut to crack because of the style of functioning. "The garments sector has stayed away from technology investments since they work in a very fragmented way, as compared to their Chinese counterparts," says Atul Mishra, Senior Research Analyst at AEPC. "Barring about 300 to 400 units, most of them outsource most jobs like washing or stitching."

Threadsol, of course, has competition from global giants that are already in this vertical. For instance, US headquartered Tukatech, which operates in India out of Gurgaon, works with about 500 Indian companies. The likes of Orient Craft and Richa Group use its software for fabric planning, pattern making and grading. There are older multinationals like France-based Lectra in this space as well.

Implementation of the technology at the factories is the major focus currently at Tukatech. "Garment manufacturers are not tech companies. We are focusing on consulting factories and educating them on using technology, since the masters (tailors) don't know the basics of IT," says Umesh Gaur, Executive Vice President for Asia at Tukatech.

Threadsol is betting on more features to take care of different stages in the garment manufacturing process. "While most companies offer nesting solutions(which help fix matching patterns between different fabrics), our software takes care of the entire value chain right from predicting the amount of fabric required, fabric grouping (which helps overcome the problem of width, shrinkage and shade variation in cloth sourced from different vendors) and roll allocation (which helps cut fabric efficiently to minimize wastage)," says Abhishek Srivastava, Vice President at Threadsol. The company also provides a mobile application for managers to get intimations of fresh orders and current status on orders being processed.

Threadsol has global plans of its own. The team is targeting sales in seven countries - India, Sri Lanka, Bangladesh, Philippines, Taiwan, Bahrain, and Turkey where apparel manufacturing is much more organised and planned than in India. The company has already broken sales in Sri Lanka, having netted Orit Apparels, the biggest denim manufacturer in Sri Lanka, which makes around 35,000 garments in a day. "I will be camping in Sri Lanka for the next two weeks, to get more prospects," says Ganguly, who has raised funding to the tune of $200,000 from Blume Ventures and Google India head Rajan Anandan, among other angel investors.

Shailesh Davey, Co-Founder and Vice-President at Zoho Corp, a global company making CRM (customer relationship management)  software, has a word of caution for the start-up. "It doesn't matter which market they go to, but they should not bloat up their sales and marketing team, though it may be tempting to do that. That can lead to costs spiralling beyond control. It is better to have resellers do some of your sales and give them a commission rather than invest in people on the ground," says Davey.

Footnote: The earlier strap-line has been expanded to better reflect the story's content.