The handset manufacturing leviathan is innovating for India and from India. 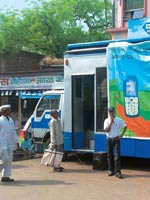 You walk into a party or a meeting and your handset uses a special service to tap social networks and identify the people. You are in command of the conversation. Talk flows... Besieged by competition, Nokia India must be wishing this device—now in the works—works for it as well. The Indian market added 113 million mobile connections last year and is Nokia’s second-largest, fetching it Rs 25,000 crore in revenues.

So, when Nokia, which sold around 80 million handsets (derived figure) in India last year and has about 65 per cent market share, saw the market being eaten away by hungry rivals, it did the only sensible thing it could. It began offering services—micro-weather and crop prices for villagers, gaming and navigation for the urban chic, music at the middle. The BlackBerry and several touch handsets from Samsung have eaten into the sales of Nokia’s ESeries and NSeries. At the bottom, a slew of small manufacturers and unregistered Chinese imports are grabbing share away. So, Nokia’s services strategy addresses each segment, even though not all of them will make money.

Thus, the “Mail For Exchange” support for its high-end devices allows easy integration with office e-mail servers. The N-Gage gaming platform has seen starts and stops ever since its launch, but Vineet Taneja, Head (Marketing), Nokia India, sees gaming and navigation as crucial differentiators in a crowded market. “Consumers will prefer our devices because they will have the option to have these services,” he says.

Both these services are currently live in India, but none is generating revenues, as a payment gateway is yet to be worked out.

At the bottom end of the market, the “Nokia Life Tools”, marketed as “Mera Nokia” in India, is the major strategy. This pilot in India, explains Jawahar Kantilal, Head (Emerging Market Services), Nokia, is just a leader. “A similar service can be taken into Africa, interior China and other parts of South-East Asia.” The pilot in Maharashtra already offers the ability to learn English words and phrases, and download ringtones and horoscopes. 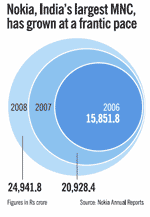 Future aspects, explains Kantilal, could include health as well and the service could be tailored according to the area the subscriber lives in (currently users have to enter their postal code to identify their location) as location technology creeps into lower-end devices as well.

The big play for Nokia, however, will be in the middle of the market with its “XpressMusic” range of devices, which will come with a service titled “Come With Music”. Here, consumers will be able to download unlimited amounts of legal music directly from their device. The cost of the music, rather the rights payments, is bundled into the cost of the handset. Nokia has tied up with all the rights owners and this service is aping their global strategy on the music front. “We will offer this service on a whole host of handsets by 2010,” says Taneja.

It appears that Nokia is letting its India team tailor services to India realising that India is unique. The objective of the services is the same, making sure that Nokia stays at the top of the mind when consumers buy a new mobile device.