For the first time since the dotcom bust, infotech majors face the prospect of decline in revenues and profits. What does this mean for the future of IT services, tech jobs and tech stocks?

Around the time New York was blanketed by a sweeping snowstorm in early February this year, top executives from a large Indian company were walking into the plush offices of a financial services giant bracing up for some tough negotiations on their contracts. With the global economy in a tailspin, the US institution was cutting its IT budget and wanted to reduce rates by up to 15-20 per cent with this Indian vendor. It also wanted smaller volumes and said it would only have three to five outsourcing partners as it sought to battle the crippling slump sweeping the financial services industry. The Indian vendor had little choice but to accede to these demands.

An industry that boasted 30 per cent-plus growth rates and margins till just a couple of years ago has today been brought to its knees. Across tier 1—which comprises Tata Consultancy Services (TCS), Infosys Technologies, Wipro, HCL Technologies, Cognizant (headquartered in New Jersey but operating out of India) and now Tech Mahindra-Satyam—companies have predicted a gloomy outlook for the new financial year. Infosys opened the floodgates, predicting an 8.2-6.5 per cent decline in dollar earnings for the first quarter. For the full year, it said dollar revenues would fall 3.1-6.7 per cent, to reach $4.35-$4.52 billion. Cross-town rival Wipro provided guidance of $1 billion for the first quarter of this fiscal, compared to $1.05 billion in the corresponding period last financial year.

If these projections come to pass, it will be the first annual decline in top and bottom line growth for the IT services sectors ever since it took off 20 years ago. For an industry that's been used to robust double-digit growth in revenues and profits—earnings growth has even touched 80 and 90 per cent in a couple of years in the current decade—a slide is something that’s difficult to digest.

Small wonder then industry stalwarts aren’t talking in euphemisms but are wearing their deepest fears on their sleeve. “This is perhaps the first time the industry will clock zero or negative growth, and in that sense it is the worst we’ve seen. Even in 2001-02, straight after the dotcom bust, the industry grew in double digits,” says Kris Gopalakrishnan, CEO & MD, Infosys Technologies. Ask Girish Paranjpe, Joint CEO, Wipro, whether this is the worst phase of the IT services sector, and he shrugs: “By a long way.”

The reversal in fortunes for the IT sector is leaving its mark on the economy—and the stock market—which is anyway grappling with its own share of uncertainties. After all, IT services has galloped over the years to become a significant contributor to economic growth. Consider this: According to industry body Nasscom, in 1998, its contribution to India’s gross domestic product (GDP) was 1 per cent. By 2008, it had moved up to 4 per cent. In these 10 years, software exports offset close to 65 per cent of the country’s cumulative net oil imports. Then, between 1995 and 2005, it contributed 45 per cent of incremental urban job creation (direct and indirect employment). It has created millions of career opportunities for the youth; and in 2008 alone the Indian IT services sector saved $20-25 billion for global customers. 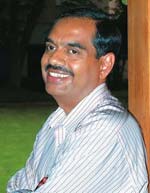 V. Balakrishnan
There’s no reason why such savings won’t continue to happen— Nasscom says the addressable market for IT services exports to the US, Western Europe and Japan will continue to grow, and revenues, if the industry remains competitive, could hit $225 billion by 2020, some 10 times what it is today, and 100 times what it was a decade ago. Yet, never has the sector hit a brick wall of the size and width that it has today. The global economy is in tatters, and companies are in no mood to spend on IT services, instead preferring to conserve cash. “Cost cutting has become a central theme,” says Gopalakrishnan of Infosys. “These measures have now begun to affect offshore IT projects too,” he adds.

“There is severe pressure on CIOs to cut costs—which means prioritising or delaying projects already contracted and cancelling those which are in negotiating stages,” adds Diptarup Chakraborti, Principal Research Analyst, Gartner. The upshot: Lower volume growth and less demand for techies.

Storm clouds gather
There are plenty of signs of trouble. According to TPI, an offshore advisory, only 141 deals were signed in the first quarter of this calendar year, valued at $19 billion, a drop of 21 per cent compared to the previous quarter (ended December) and down 22 per cent from a year ago.

Contract size is down 18 per cent and 27 per cent respectively. In terms of IT spending, technology researcher Gartner has predicted IT spending will go down to $3.2 trillion in 2009 from $3.4 trillion the previous year. Customers today want to derive a 10-30 per cent cost saving from their IT contracts,” says Sudin Apte, Country Head for Forrester Research. Peter Bendor-Samuel
On the ground, this has meant that companies have postponed or cancelled projects, while some customers are taking longer to decide. The result of the global recession is that “major corporations have downsized; they have cut the volumes of what they offshore and have significantly reduced their project-based spending,” says Peter Bendor-Samuel, CEO of the Everest Group, a technology research outfit. Adds Vineet Nayar, CEO, HCL Technologies, which registered a 49.6 per cent decline in profits last quarter: “Clients want us to cut costs…the reality of the situation is that we have to offer discounts. That is why our realisations have fallen this quarter.”

In an effort to cut costs, companies are reworking their hiring strategies, recruiting only whom they need, just before a project goes live (see Surviving the Apocalypse, page 52). “I would rather pay more to a trained guy with proven skill sets than someone who will be trained for six months and then benched for another six,” says Nayar. Infosys has increased by two weeks the training period for fresh hires.

TCS, the only large player to not give formal guidance, is also muted with its outlook. “A 100 clients—or 40 per cent—have reported a fall in revenues and more than 55 per cent have reported a fall in profits. Since they are operating in such an environment, you have to negotiate price, or sometimes you work out a different structure,” says N. Chandrasekaran, Chief Operating Officer & Executive Director, TCS.

Painful steps
If Indian IT is feeling the pain, it’s not just because of the reduction in IT spends. Chandramouli C.S., Director, Advisory Service, Zinnov Management Consulting, points out that clients are now involving senior management in decisionmaking on IT contracts, thereby extending decision cycles. Egidio ‘Edge’ Zarrella
Indian IT has also had to face up to some external economic pressures. For example, none of these large Indian companies has been able to manage the foreign exchange yo-yo, which has seen the rupee-dollar equation swing from Rs 35 per dollar to over Rs 50. “We had to take a call between micro-managing the forex risks or managing our business in these tough times.

We chose our business, since it’s become virtually impossible to handle the other issue,” says V. Balakrishnan, CFO of Infosys. Forex losses among top tier Indian IT firms range from Rs 201 crore for HCL Technologies to Rs 781 crore for TCS.

Then, there is the issue of H1B visas. Companies that have received US government aid need to prove the paucity of technical talent at home before they can shift work to locations like India. With many large American financial services and auto firms working with Indian companies, “this issue is an area of concern,” says Infosys’ Gopalakrishnan. Given these concerns, the offtake of these visas has been slow, with 44,000 of the 65,000 visas available given out.

In reaction to the slowdown, Indian IT has been using multiple levers to try to stem fast-eroding profits and margins. Most visibly, companies have brought hiring to a stop, dramatically reduced hikes and promotions and turned the heat on poor performers. Some companies such as Wipro are giving their IT services hires the opportunity to work in the firm’s BPO arm. “We want to provide a single package to customers and this move will give employees the opportunity to acquire a broader range of skills,” says Paranjpe.

Freezing conditions
“TCS has made 24,800 campus offers for financial year 2009-10. But the company has put a freeze on increments and the variable payout will be in the range of 94-95 per cent across various levels,” says Ajoy Mukherjee, Head, Global Human Resources. TCS has rationalised its people cost by taking a hard look at headcount and relocating employees, he adds. Infosys has taken this one step further, sacking 2,100 nonperformers and announcing plans to hold back promotions and hikes.

Wipro will hire a little over 2,000 people this year, compared to 12,000 in the last financial year. However, HR is just one of the levers industry executives are increasingly reaching for. Industry executives are now openly talking of transitioning to a transaction-based rather than an effort-based approach to their work, moving to longerterm annuity contracts and substantially increasing utilisation of their workforce. “Our current utilisation is around 74 per cent, but this can go as high as 78-80 per cent,” says Gopalakrishnan.

On the ground, companies are toning down on freebies such as beverages and snacks and slashing travel budgets. Already, some companies are having some successes with these measures. TCS, for example, has reduced employee costs by Rs 121 crore in the fourth quarter, with travel expenses down 17 per cent quarter-on-quarter and selling expenses down 20.75 per cent.

“Organisations are looking for innovative ways to improve efficiencies. Applications and infrastructure need to be streamlined and improved,” says Egidio ‘Edge’ Zarrella, Global Partner in Charge, IT Advisory, KPMG.

Strength as weakness
Industry watchers say that the perceived strength of India’s IT industry may have also contributed to its troubles. Most of the work IT companies do remains project-based and discretionary. Simultaneously, a large chunk of the software they code is from India or other centres. “The first thing to be cut in times of a slowdown will be these discretionary projects,” contends Siddharth ‘Sid’ Pai, Managing Director & Partner, TPI.

Earlier, work was primarily done point-to-point, between location A and location B. It was usually North America and India. But, today, because of the complexity of applications and the need to source talent from across the globe, a matrix of locations—right from the Philippines to Eastern Europe—is being used to deliver customer value. “Customers today are looking to tap into the right talent wherever it is available,” adds Chandrasekaran.

Analysts believe that Indian companies may need to be more aggressive on their global expansion plans. “There is at times the feeling that Indian providers are not global,” says KPMG’s Zarrella. “Many organisations are not looking at growth but at survival. Indian vendors must address client issues and not sell the same way with same products. They must be innovative,” he adds. Inorganic growth maybe the fastest and most efficient route to becoming a global player. While multinational giants have bought Indian companies to expand their global delivery footprint, Indian companies have yet to show the appetite for riskier, $500 million plus deals. Even Wipro, which has been bullish on the inorganic front, primarily bought companies for their technical capabilities rather than global delivery abilities, say experts.

With the slowdown only expected to get worse before it gets better, Indian IT will need to take some quick, firm steps to avoid getting sucked right into the storm.

Hope on the distant horizon