The 14th Business Today-KPMG survey of India’s Best Banks reveals, there’s one bank that continued to roll better than all others: HDFC Bank. Once again, for the fifth year in a row, the Aditya Puri-led bank beat 76 others to emerge as the #1 player in the industry.

Print Edition: February 24, 2008
In a year when quite a few of the mighty banks in the US stood humbled and humiliated, things were rather uneventful for banks in India. While almost every banker in the country turned jumpy at the word subprime, few lost sleep over it. For good reason. The domestic economy continued to grow, housing prices more than held up (now, though, there are signs of softening in some cities), consumers bought more goods and services (a lot of those on credit), and foreign investors continued to pour dollars into the country. As a result, Indian banks were on a roll last year.

But, as the 14th Business Today-KPMG survey of India’s Best Banks reveals, there’s one bank that continued to roll better than all others: HDFC Bank. Once again, for the fifth year in a row, the Aditya Puri-led bank beat 76 others to emerge as the #1 player in the industry.

So, what makes Puri’s HDFC Bank the top dog? The fact that across the more than two dozen parameters that the BT-KPMG study considers, HDFC Bank is a more consistent performer. That is, the 13-year-old bank manages all aspects of its business much better than other banks do. It’s a difficult balancing act to do—for example, ensuring both growth and quality of assets—but HDFC Bank seems to have figured out how to do it.

However, HDFC Bank retaining its top position isn’t the most surprising part of the BT-KPMG study findings this year. Rather, it’s ICICI Bank’s drop from #2 to #9. Historically a close competitor of HDFC Bank on our rankings, ICICI has slipped several notches, widening the gap between itself and its archrival. Does it mean that HDFC Bank is stealing a march over the K.V. Kamath-led ICICI? Ironically, no. What the numbers reveal is only the aggressive strategy that the latter, already India’s biggest private bank, is following to increase its lead.

Consider: the three-year compounded annual growth rate in deposits at ICICI is a whopping 50 per cent compared to HDFC Bank’s 31 per cent; its three-year CAGR growth in advances, too, is a high 47 per cent compared to HDFC Bank’s 38 per cent. So, what ICICI is doing is focussing on growth, taking on slightly more risk than HDFC Bank in the hope that cornering customers will not only allow it to cross-sell more products to them (and hence higher profit), but also make it more expensive for its rivals to break away customers from its fold. ICICI’s focus on growth is evident from its cost-toincome ratio. At 53.25 per cent, compared to HDFC Bank’s 46.32 per cent, ICICI’s cost-to-income ratio is the highest among the top 20 big banks. 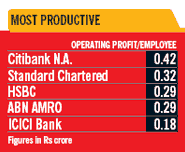 Is there a risk to ICICI’s aggressive growth strategy? There is. The biggest is that the quality of its assets may get compromised. Already, the bank has a relatively high net NPA-to-net advances ratio of 1.02 per cent, which is lower than, say, Standard Chartered’s 1.43 per cent, much significantly higher than HDFC Bank’s 0.43 per cent. The challenge for ICICI, then, as it moves furiously to build heft in the market place will be to ensure that it does not lend to less-than-ideal customers.

Industry experts don’t expect that to be a major issue; they say that the bank has already learnt how to manage unsecured lending much better than several of its rivals, and will only get better in the years ahead. Among the large foreign banks, HSBC emerges as the surprise leader. It has jumped three places from last year to #2, making it the best foreign bank in the country.

What is Nainal Lal Kidwai, the bank’s CEO, doing right compared to her MNC competitors? To put it simply, she has a strategy that is not too different from Puri’s at HDFC. Both of them are growing their banks nicely, but at the same time ensuring that their assets generate good returns and don’t turn bad. Result: HSBC’s net NPA-to-net advances ratio is a low 0.43 per cent, compared to 1.02 per cent of Citibank and 1.43 per cent of Standard Chartered. Its return on assets at 1.54 per cent is the second highest among the top 10 big banks (Standard Chartered tops at 2.32 per cent). 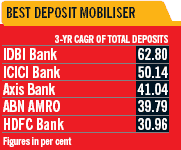 As Kidwai explains (See Jumpstart on page 84), the bank’s strategy of expanding its portfolio of services has paid off handsomely. The other consolidating trend that this year’s study reveals is the growing improvement in the performance of large public sector banks. In fact, there are four PSU banks in the top 10 this year—no mean achievement. What’s happened is that the better-run PSU banks have managed to rein in their NPAs and at the same time focus on growth and efficiencies.

Finally, who are the category winners? Punjab & Sind Bank emerges as the best small bank (balance sheet size less than Rs 24,000 crore), Axis Bank and YES Bank take the title of the fastest growing big (balance sheet size in excess of Rs 24,000 crore) and small bank, respectively, while Federal Bank and Karur Vysya Bank retain their honours as the most efficient big and small bank, respectively.

Among the small banks (balance sheet size less than RS 24,000 crore), YES Bank comes in at #2 right behind Punjab & Sind Bank. That means it has beaten other relatively young banks such as Rana Talwar’s Centurion Bank of Punjab, Uday Kotak’s Kotak Mahindra Bank, and the Hindujas’ IndusInd Bank to emerge as the fastest growing bank. Of course, the fact that YES Bank has a smaller balance sheet (Rs 11,103 crore) than either Centurion (Rs 18,483 crore) or Kotak (Rs 19,915 crore) helps, but there’s no denying that Rana Kapoorfounded Yes Bank is not just clipping, but also well differentiated in the industry. “We have clearly positioned ourselves differently from the rest. We have adopted a knowledge-driven approach that goes beyond the traditional realm of banking,” says Managing Director & CEO Kapoor, referring to the bank’s diversified portfolio, which has specific focus on sunrise sectors such as food and agriculture, biotechnology, life sciences, and infrastructure.

P.J. Nayak
What would you call a bank that has grown its profits at 30 per cent or more in 28 of the last 30 quarters? At the least, a consistent performer. But what has earned P.J. Nayak-led Axis Bank (formerly UTI Bank) its distinction as the fastest growing big bank is its equally impressive growth in other areas such as deposits, and loans and advances.

Overall ranked #5, Axis has grown at a five-year CAGR of 38 per cent. “We want to be known as an Asian Bank,” says Nayak, Chairman and Managing Director. “In the last year and a half, our overseas operations have accounted for 7-8 per cent of our business, which will account for 15-20 per cent in the next couple of years.” Currently the bank is present in Singapore, Dubai and Hong Kong, with a representative office in Shanghai. In the domestic market, the growth strategy is to diversify capital market operations and grow inorganically as and when opportunities arise. “Apart from normal banking operation (including core banking and non-interest income), we would like to take advantage of the strong capital market by venturing into private equity, broking, asset management and insurance businesses,” says Nayak. The only hitch: Nayak is due to retire mid-2009.

M. Venugopalan
Our strength is technology coupled with human touch,” says Federal Bank Chairman and Managing Director M. Venugopalan. No wonder his Kerala-based private sector bank once again ranks as the most efficient big bank in this year’s BT-KPMG study of best banks. The bank has been consistently profitable. “We do not go for blind volume growth. The increase in our cost of deposits is among the lowest, while our rate of yield on advances is high.

This has protected our net interest margin and ensured steady increase in profits,” explains Venugopalan. Federal bank is among the first traditional banks to use IT to the hilt. All its branches are automated and networked. According to Venugopalan, his bank follows an aggressive provision policy to keep its balance sheet insulated from future shocks. “We have covered 85 per cent of our NPAs with provisions,” he says.

Alongside its banking activities, the bank is active in distribution of third-party mutual funds, and life and non-life insurance products that fetch its fee-based income.

Karur Vysya is one of the older private sector players but a relatively new convert to technology (it introduced core banking solutions in 2005). Just the same, the Tamil Nadu-based bank has lost no time in leveraging technology to expand and become efficient. Currently, the bank has 281 branches (and will expand to 300 in next two months), 279 ATMs of its own including 18 in rural areas and 108 in semi urban areas, and piggybacks on 10,000 other ATMs. Still, the bank is keen to build its physical presence. It plans to increase the number of branches to 300 shortly and create a pan-India presence.

“We find value in increasing branches and this is reflected in our results,” says Chairman P.T. Kuppuswamy, adding that such a strategy also helps Karur reach out to customers who are not computer savvy. Karur also runs a tight ship. Its NPA as a percentage of net advances in 2006-07 was a minuscule 0.23, although the more recent figure puts it at 0.05 per cent. “We are in no hurry really, but in the next quarter we can bring it down to zero,’’ says Kuppuswamy, whose bank also had one of the lowest cost-to-income ratios of 41 per cent.

R.P. Singh
It’s been a dramatic story of turnaround at Punjab & Sind Bank. Even three years ago, the public sector bank was a laggard. But ever since the government bailed it out with an infusion of Rs 500 crore, it has grown from strength to strength.

What will the FM do?