Infrastructure & Urbanisation: Prospering with the Flow

ABOUT: Somewhere along the rapid growth of India's vast road and railways network, river-based navigation got the short shrift. But with global demand to align economic growth with environmental harmony, water navigation is getting a second look.
By Pravir Pandey | Print Edition: January 17, 2016 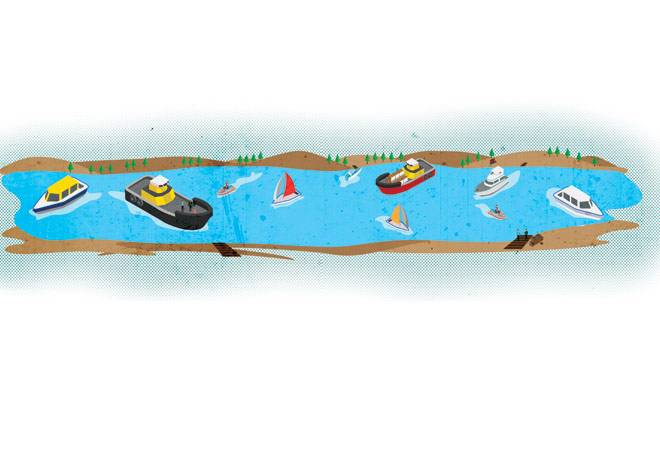 ABOUT: Somewhere along the rapid growth of India's vast road and railways network, river-based navigation got the short shrift. But with global demand to align economic growth with environmental harmony, water navigation is getting a second look. Pravir Pandey, Member, Finance, Inland Waterways Authority of India, explains why inland waterways-based movement of people and goods, particularly National Waterway- 1 between Allahabad and Haldia on Ganga-Bhagirathi-Hoogly River System, is of truly national significance.

"Any river is really the summation of the whole valley. To think of it as nothing but water is to ignore the greater part" - Hal Borland in This Hill, This Valley

In ancient times the Ganga and some of its tributaries, especially in the east, were important transportation routes. According to Megasthenes, the Ganga and its main tributaries were being navigated even in the fourth century BC. By the 19th century, irrigation-cum-navigation canals formed the main arteries of India's water-transport system. The advent of paddle steamers revolutionised inland transport, stimulating the growth of indigo production in Bihar and Bengal. Regular steamer services ran from Kolkata up the Ganga to Allahabad and far beyond, as well as to Agra on the Yamuna and up the Brahmaputra River.

The decline of large-scale water transport began with the construction of railways during the mid-19th century. The increasing withdrawal of water for irrigation also affected navigation. Today, river traffic is insignificant beyond the middle Ganga basin around Allahabad, and mainly consists of rural river craft (motorboats, sailboats, rafts, etc). Navigation on the Ganga has been a lost socio-economic opportunity for years.

Connectivity and prosperity are interlinked. The US, China, Europe, Vietnam, Thailand, Brazil, Argentina, Paraguay and several African nations have taken great strides in developing inland waterways. With substantial investment, they have been able to maximise the socio-economic benefits of inland waterways. The rest of the world is catching up fast. India cannot afford to be left behind.

The US, China, Europe Vietnam, Thailand, Brazil, Argentina, Paraguay and several African nations have taken great strides in developing inland waterways. The rest of the world is catching up fast. India cannot afford to be left behind.

National Waterway-1 (NW-1) on the Allahabad-Haldia stretch of the Ganga-Bhagirathi-Hooghly River System is a waterway of truly national significance, passing through the states of Uttar Pradesh, Bihar, Jharkhand and West Bengal. It has the potential to serve the cities of Haldia, Howrah, Kolkata, Bhagalpur, Patna, Gazipur, Varanasi and Allahabad, their industrial hinterland and other industries located along the Ganga Basin. The rail and road corridors of this region are already saturated. The development of NW-1 would result in a viable supplementary mode of transport.

The most important navigational challenge is the depth of the water in the river. Adequate depth is essential to make a waterway navigable and commercially viable. Large alluvial Himalayan rivers like the Ganga typically have more depth in their lower reaches than their upper ones, since they are joined by tributaries carrying discharge from their own catchment areas. While the Inland Waterways Authority of India (IWAI) has been able to maintain a least available depth (LAD) of three metres between Haldia and Farakka, it has been difficult to maintain a LAD of even two metres in the upper reaches of NW-1 between Patna and Allahabad due to very low discharge and difficult hydro morphological characteristics. As a result, currently, vessels of a capacity of up to 750 deadweight tonnage (DWT) only can navigate the NW-1 in the reaches beyond Farakka.

(Photo: Shekhar Ghosh)
What is needed is capacity augmentation of the entire NW-1 right up to Allahabad, as many shippers have shown interest in using it. To enable bigger vessels of 1,500-2,000 DWT to navigate it, the infrastructure on NW-1 needs to be developed. Once large vessels begin to ply between Haldia and Allahabad, it will reduce transport cost for shippers, reduce congestion and accidents on highways, and bring about convergence between river transport and other modes of surface transport. It would also reduce carbon emissions and emission of particulate matter considerably.

The government has already initiated a proposal for capacity augmentation of navigation on NW-1. It has been put forward to the World Bank for technical assistance and investment support. The World Bank has indicated its readiness to support the effort, starting with an initial loan of $50 million. Finance Minister Arun Jaitley, in his Budget speech of 2014/15, had announced the Jal Marg Vikas Project on the Ganga between Allahabad and Haldia.

The project will start by outlining a sustainable and cost-effective framework. The framework will set criteria for eligibility, preparation, appraisal and implementation. It will be developed during the project preparation period, and will have to be approved by the World Bank's board of executive directors.

An essential component of the Jal Marg Vikas Project will be strategic communication campaigns aimed at citizen participation, particularly of communities living in the influence zone of the project corridor. Extensive public consultations with families and communities likely to be affected by the project will be carried out before actual implementation begins.

The project also aims to improve the investment climate and institutional development. Multi-modal logistics hubs integrated with surface modes of transport - road and rail - will be established. The critically important attributes will be (a) the origin and destination of various trades, (b) the type and volume of potential cargoes, and the identification and mapping of potential cluster industries.

The government has already initiated a proposal for capacity augmentation of navigation on NW-1. Finance Minister Arun Jaitley in his Budget speech of 2014/15 announced the Jal Marg Vikas Project on the Ganga between Allahabad and Haldia.

The costs of infrastructure development have to be carefully evaluated. The project presents unique and difficult engineering, environmental and business development challenges. The price tags are high. Will trade follow? Will the engineering interventions provide sustainable solutions? Will the environment remain safe? Will regional economies grow, delivering value for money to users, stakeholders and private investors? To answer these questions, the project has commissioned the services of three consortiums of reputed consultancies.

A joint venture of Howe Engineering (India), HR Wallingford (UK), and Rodic (India) is conducting a detailed feasibility study of the capacity augmentation intended and the detailed engineering envisaged for the ancillary works. Another team of EQMS (India), Abnaki Infrastructure Application and Integrated Development (India), and IRG Systems (South Asia), is looking at the environmental and social impact of the project, and preparing an Environment Management Plan (EMP) and a Resettlement Action Plan (RAP). A third consortium of Hamburg Port Consulting (Germany), IMS Imgenieurge (Germany) and Ramboll (India), is looking at the Inland Water Transport (IWT) sector's development strategy and carrying out a market development study as well for capacity augmentation.

An agreement for a project preparation fund advance (PPFA) of $3.5 million was signed between the World Bank and India's Department of Economic Affairs on June 6, 2015. A robust and functional management structure for the Jal Marg Vikas Project has been constituted to ensure timely and quality execution of the project.

Land acquisition is a major hurdle for all infrastructure projects, including highways and railways. But transportation through waterways does not involve much land acquisition, except in a few places where terminals have to be constructed.

At present, there are 20 floating and two fixed terminals on the NW-1. These are ill-equipped to handle the huge quantity of cargo expected to move after the capacity augmentation of navigation. The scoping and project preparation missions of the World Bank have identified Varanasi, Haldia and Sahibganj for construction of multi-modal terminals with rail and road connectivity. The construction of a multi-modal hub with rail and road connectivity at Ramnagar, Varanasi, is high priority. A memorandum of understanding was signed in March 2015 with the Dedicated Freight Corridor Corporation of India Ltd (DFCCIL) for technical support for rail connectivity at Varanasi and for developing additional hubs in future on national waterways. The work is expected to commence by January 2016.

The construction of a multi-modal hub with rail and road connectivity at Haldia is also high priority. Studies by the IWAI and the World Bank concluded that Haldia has huge potential. After site surveys, land mapping, cargo studies and environmental impact assessment, 61 acres of land have been taken over on lease from the Kolkata Port Trust. The tender is expected to be floated in January 2016; work should start by March.

The IWAI is also contemplating design and construction of low-draft vessels with high cargo carrying capacity. An IWAI team visited Netherlands and Germany to study the design of low-draft vessels. Introducing such vessels in the waterways would provide useful logistics solutions, providing a cheap and cost-effective alternative to heavy capital expenditure to ensure adequate depth in the waterways. The other major works envisaged at this stage are construction of a multi-modal terminal at Sahibgunj in Jharkhand and a new navigational lock at Farakka. The technical feasibility studies, environmental and social impact assessment and cargo projection studies for these have been completed.

The IWAI has taken up the challenging project of setting up, for the first time in India, a River Information Service System on the NW-1. River Information Services (RIS) are equipment-, hardware- and software-related services designed to optimise traffic and transport processes in inland navigation. This will facilitate inland navigation safety and optimise resource management of the waterborne transport chain.

Land acquisition is a major hurdle for all infrastructure projects, including highways, railways and urban transportation. But transportation through waterways does not involve huge land acquisition except in a few places where terminals have to be constructed. In comparison to other infrastructure projects, land acquisition is negligible. As a result, there will be insignificant impact on ecology and biodiversity, agricultural activities as well as on livelihoods. Improved river flow due to augmentation of navigation facilities will benefit aquatic flora and fauna. There will also be increase in economic opportunities.

The project will also enable communities living alongside to conduct activities on both sides of the river. Improved access to trading centres and ancillary infrastructure along the NW-1 will benefit local, regional and international business, apart from generating employment opportunities. It will spur tourism as well.

How to rejuvenate and transform the police force

Can law be an instrument of social justice?