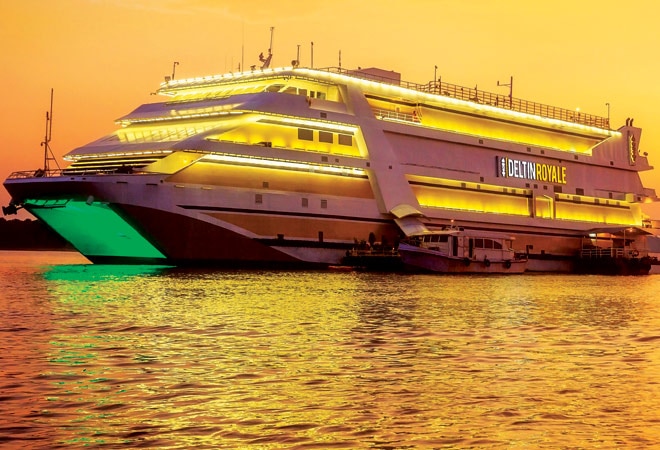 On a muggy morning in Old Goa, the 16th-century Basilica of Bom Jesus, a UNESCO world heritage site that holds the mortal remains of St. Francis Xavier, looked striking against the cloudy sky. This author strolled in and out, lazily, before showing up at the Chapel of St. Catherine and the ornamented Church of St. Francis of Assisi.

The bout of piety was short-lived. As evening unfolded, it was time to take the narrow, serpentine roads to Panaji and further, to the banks of river Mandovi, where pleasures of a different kind awaited. Here, around Dayanand Bandodkar Marg, is an entertainment district - at dusk, four floating casinos light up, including Deltin Royale, Asia's largest luxury offshore gaming den.

A boat from Noah's Ark jetty takes you to this ship, which is 87 metres long and 22 metres wide. Multi-coloured LED display lights up the bow. Close to 500 tube lights around the vessel give out hints about the glitter inside. Guests can buy different packages and are identified by bands - green, purple, red, white and gold. The gold bands are for VIPs while the white ones are for invitation-only VVIPs. These facilitate access and help employees decide the level of service. A regular package costs Rs 2,500 per adult while a VIP badge will set you back by Rs 7,500. A 'premium stay and play' package, that offers a two-night stay at Deltin Suites Hotel in Goa for two, costs Rs 33,000. At Deltin Royale, you can play Poker, Roulette, Indian Flush, Baccarat, Blackjack, Pontoon, Casino Wars, Sic Bo and Money Wheel. There are 123 gaming tables and 30 slot machines
The first-floor arena, a place for low-value bets, is bustling. The rattling of spinning wheels, ball-drops and bounces in Roulettes drowns human chatter at times. Slot machines - the easiest of all casino games in which hitting the jackpot depends on pure luck - are lined up on the sides. The 123 gaming tables, with more than 750 positions, take up most of the space. The casino offers 12 games. These include American Roulette and slot machines. There are also Indian Flush (Teen Patti), Baccarat, Blackjack, Poker and Money Wheel. Roulette, however, seems to be the most popular. "It gives an adrenalin rush," says a casino guide, as the dealer begins the game by spinning the ball and players guess the slot it will land in. Quite a few are playing Blackjack, a thinking game where players aim to have cards whose numbers add up to 21. Baccarat is a high-stake game in which bets can go up to lakhs. There are exclusive Poker and Flush rooms too. "Poker is a game of skill that is extremely popular in the US. It is gaining popularity with the young in India. Flush is an age-old Indian game that can never fade," says a spokesperson. The place is open 24 hours. As if to stress the point, the promoters have not put up clocks on gaming floors.

The bustle increases around 11 p.m. Some are ordering drinks. A few look at television screens, which show only news and sports channels. Some look dejected. A lady in red shrieks out in joy. She has beaten the house. The rush lasts till three in the morning. Jaydev Mody, the chairman of Delta Corp, which runs Deltin casinos, sees a bright future for gaming in India. The company earned Rs 268 crore from gaming in 2014/15. (Photo: Rachit Goswami)
Royale gets around 400 players in a day and earns about Rs 15,000 per person. The guests are mostly from Mumbai, Gujarat, Delhi, Hyderabad and Tamil Nadu. Among them are sportsmen, television celebrities, painters, professionals and top corporate executives. "CEOs of largest corporations have visited us. They hold meetings and conferences here," says Anil Malani, President, Operations at Delta Corp, which runs the casino. The day this writer was visiting, founders of a start-up that recently raised huge funds, too, were present. We couldn't ascertain if their investors knew!

The guests get royal treatment. Most are well-travelled. Many may have visited the larger casinos in Macau, such as The Venetian Macau, or those in Singapore. Royale aspires to match up to these top names in the business. Click here to Enlarge
Ambience, art work, furniture, food/drinks menu, they all change with the floor. The amount of bets rises as one climbs up. While entry-level guests are offered Indian-Made Foreign Liquor, VIP guests get imported drinks. But the apogee of luxury is the fourth level. The management calls it the "Belvedere of Gaming". Entry is only by invitation. There are four private gaming suites with butler service. Players can hold meetings, take a nap, or just take it easy in cubicles with recliners. There is a separate kitchen. A corporate chef takes care of the players with options ranging from curated to Jain and diet food. Some demand exotic food - from sushi to lobsters. It's not a problem. It is served.

Vases have orchids and anthuriums with golden and silver dry twigs. The 'blue and gold' theme runs throughout the casino but the luxe level has a totally different get-up. There are just 16 tables. The layout is circular compared to the linear arrangement of the first level. With leather chairs, the seating, too, is aristocratic. The tables have marble tops. An executive lounge, called Velvet, is earmarked for closed-door meetings.

The casino-specific art work is the creation of Mumbai-based artist Krsna Mehta. The underlying theme is gaming, casino motifs and Goa. There are horses too. A 11/6 feet painting of two polo players adorns a wall on the fourth level. It is from Delta Corp Chairman Jaydev Mody's personal collection. The look and feel of the casino, in fact, has much to do with Mody's eye for detail. For instance, the fourth level has linen towels in washrooms. "We wanted to use 550 grammes per square metre (GSM) towels. Mody recommended 700," says Malani. GSM is the standard measurement of fabric weight; the higher the GSM of the towel, the better is its quality.

"I am very particular about the colour of carpets and curtains, and design elements. Everything goes through me," Mody tells Business Today in his office in Mumbai. He wants to build a casino empire in India.

WHISKYS LOUNGE: The place, on the second level, serves single malt, scotch, wine and cocktails
Deltin Royale started in August 2013, but this is not Mody's only investment. Delta Corp also operates Deltin Jaqk, another offshore casino on the Mandovi river. A third casino in Goa, Deltin Caravela, is awaiting approvals. The company is also preparing for the launch of an onshore gaming operation in the union territory of Daman. Besides gaming, the company runs three hotels - Deltin Suites and Deltin Palms in Goa and The Deltin in Daman. It used to have a real estate business, too, but exited as part of a consolidation strategy. The company had a joint venture with Reliance Industries that developed commercial and residential properties in Kenya. Delta says it has made a "profitable exit". 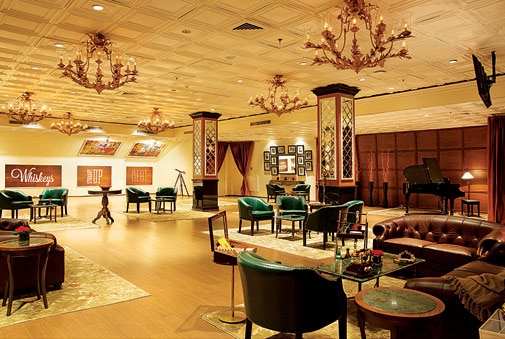 THE LUXURY GAMING FLOOR: It has a circular layout. It has 16 tables, four private gaming rooms with butler service, and a lounge, Velvet
Talking about the journey, Mody says: "There was only one casino in Goa that was offshore for several years, since around 2000. Prior to that, there were several onshore casinos in five-star hotels." The Goa government then said it would issue up to six licences for offshore casinos. "That was the time I applied. We were the earliest entrants along with Pride, our competitor. Today, we run the best casinos in Goa."

Only two states in India (Goa and Sikkim), apart from the Union Territory of Daman, allow casinos. And in Goa, only offshore casinos can do live gaming (in which instead of electronic gambling, dealers run the show). Apart from the two set-ups run by Delta Corp, Goa has two more live casinos run by the Pride Group. Mody estimates that the casino market in India is about Rs 500 crore a year, but that is just a fraction of the total gambling market, most of which is illegal.

Indians have known gambling for ages. The games, of course, have changed over time. Right now, cricket betting and matkas are in currency. Both are illegal. Betting on horses, however, is legal.

"In cricket, they do Rs 5,000 crore a game. Every city has matka. The total market must be Rs 500 crore a day. So, our thing is a drop in the ocean," says Mody, who has a passion for horse racing and owns 70 horses. Mumbai's racing market is worth Rs 170 crore, he says. Overall, Indian racing is likely to be worth Rs 1,000 crore, he estimates.

The Deltin Royale ship was bought from Caesars Entertainment Corporation, a casino-entertainment company in the United States. Mody retrofitted it to suit Indian preferences. While the chandeliers, around 40, were left untouched, Mody's daughter, Anjali, a designer and a "creative quirkaholic", planned much of the artefacts and furniture on the luxury floor.

"My daughter did a lot of accesorisation to make the ship look more luxurious. My younger daughter, Aditi, also helped me. Both went to chor bazaar, bought mirrors from there, and got them redone," says Mody. The US market is mostly about slot machines while Indians prefer table games. That is why Mody ordered tables to be made in Goa. "We bought the housing of the machines but the software was written in India," he says.

Mody has turned 60 but shows no sign of slowing down. His colleagues vouch for his musical prowess. "I used to be a good drummer and singer. Now, I am an old drummer and singer," he says. He prefers Rock and Blues and doesn't like Hindi music on casino floors.

Modys love for music shows in the way he has planned the set-up. The second floor is the entertainment destination. On one side is Vegas, a multi-cuisine restaurant with a stage for live performances. Bollywood music is okay here, but this is also the place for international dancers to do their acts, such as Moulin Rouge, on Fridays, Saturdays and Sundays. 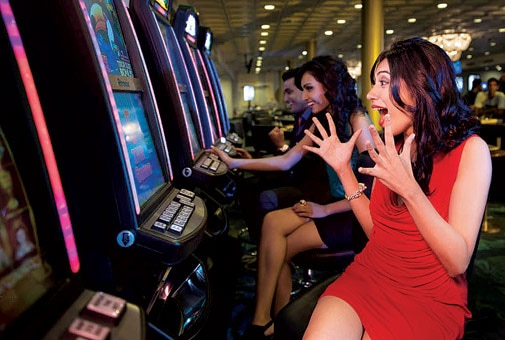 The software for the gaming machines was written in India
On the other side of the second level is Whiskys, a premium lounge with a collection of single malts. The entry is restricted to those who buy a VIP package. The music is dramatically different compared to Vegas. Subtle piano recitals and local bands do the job here. Sitting here, this writer gorged on chicken xacuti and prawn rava fry. The love songs played by Konkani instrumentalist group Emiliano Da Cruz's Trio made the fare even tastier.

The music is the same on all gaming floors. It is set to different tempos. Early mornings, the casino plays peppy house music, because players are tired by now.

By this time, some get drunk and misbehave. There are bouncers in every corner for such situations. The tables have multiple cameras, and you are always being watched. A few lose their shirt gambling across casinos in Goa. Hoteliers in the region have interesting stories to tell - a frustrated gambler trying to leap out of the hotel window to escape; someone refusing to pay hotel bills because he went broke; yet another who left his wife and children (some casinos have a creche) behind and came onshore alone. Deltin's handlers insist such occasions are rare. "It is a touristy kind of a population. Nobody comes here for serious gambling. It's more fun," says Mody.
Tags: luxury | luxury market | casinos | gambling

Here are the hottest trends in luxurious travel

Find out the contemporary styles for men