Three years after its first Indian cash and carry store opened in Amritsar through a joint venture with the Bharti Group, US retail giant Walmart is bullish on Indian retail.

Ten of the 17 BestPrice Modern Wholesale stores of Bharti Walmart Pvt Ltd opened in 2011, and the company plans to add 10 more by the end of 2012. Bharti Walmart COO Arvind Mediratta says the company is largely unaffected by the problems in the retail sector, such as rising rents and high cost of operation. "Most of our stores are seven or eight km from cities, where rents are comparatively low," he says. 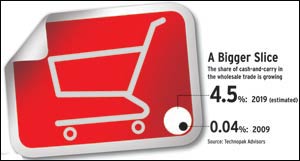 Click here to Enlarge
Cash and carry brings small retailers into the fold of organised retail by offering convenience, transparent pricing and product availability. One reason why this business is doing well when other modern retail formats are not, Mediratta says, is that players such as the Future Group and Reliance Retail have less discipline. "The key differentiator is inventory management and training people," he says.

Despite strong sales growth, Bharti Walmart had accumulated losses of Rs 765 crore as of December 31, 2011, largely on account of investing in logistics, supply chain and opening new stores. Industry sources say that opening a store requires an investment of Rs 60 crore.

Logistics expertise has helped Bharti Walmart cater to small-town retailers. "When we set up our Amritsar store, we met shopkeepers who travelled to Delhi to buy cutlery, condiments and speciality foods such as turkey," says Mediratta.

"We saw the demand and stocked these things." A spokesperson at Metro Cash and Carry India notes: "Customer preferences are changing. Some supply chains offer limited products, and that is where this format scores well."

Unlike Bharti Walmart, Metro Cash and Carry, whose parent company is based in Germany, has focused on big cities such as Bangalore, Delhi and Mumbai. India allows 100 per cent foreign ownership in wholesale operations and single-brand retail. French retailer Carrefour and Britain's Booker have also entered the Indian cash and carry market in the last three years.

Why only cash-rich will survive in retail business