The top three IT companies are still among the 10 most valuable companies in India, but D-Street’s appetite for IT stocks in general seems to be on the wane.

It’s a state of affairs that the IT industry would not have imagined it would be in, less than a year ago. For the first time in nearly a decade-and-a-half, the industry finds that it has become a ‘contrarian industry’—an industry that analysts expect to do well when the rest of the market is down. An industry instead of being the catalyst of bull runs (like it has been in the past), is now a laggard as stocks of most other industries zip ahead. Dollar doldrums
At the time of writing, industry ‘bellwether’ Infosys Technologies bumped to its 52-week low of Rs 1,534. Like a Mumbai-based analyst says: “If you predicted that Infosys would breach the Rs 2,000-mark two years ago, people would have laughed you off. But now that it’s below Rs 1,600, anything seems possible.”

And the effect of that fall is visible in the BT rankings. For the first time in a decade, Wipro (#8) has not made it among the top five companies and HCL finds itself out of the Top 25 companies (#31). This slide in rankings can be pinned down to two factors. One, the weakening dollar. Two, other industries like infrastructure have performed better than the IT sector. But first, the dollar. Thumbed down by investment guru Warren Buffett, dissed by Rapper Jay-Z and dumped by supermodel Gisele Bundchen, the dollar’s downward dip has dug into IT services firms where it hurts the most—their bottom lines. For the record, the rupee appreciated approximately 11 per cent in the first 11 months of the year and about 14 per cent year-on-year.

TCS CFO S. Mahalingam, for one, is looking beyond just dealing with the vagaries of the dollar, which some alarmists believe will touch the Rs 35 mark in the foreseeable future. “I don’t think it will go to or below Rs 35 …I think things will settle around Rs 38, but the hypothetical question is this—can I still manage at a hypothetical situation of Rs 35 per dollar?” muses Mahalingam.

There has been some speculation that the IT industry operated with reasonable success in the Rs 35 per dollar band less than a decade ago—a feat some consider repeatable. But Mahalingam dismisses that idea contending that the cost structure of the industry (read: wages) has changed considerably.

The key, according to Mahalingam, is greater focus on cost and revenue management. “I have to admit that life, so far, has been very easy. So, we have all operated with a degree of inefficiency which we have condoned because there was always the depreciating rupee that took care of things,” says Mahalingam.

“In fact, I would keep saying jokingly that it helps us to be inefficient in billing and collections because if you postponed it, the rupee depreciation took care of things and at times, even gave you a gain. Now we don’t have that luxury.” That seems to be the lines along which the rest of the industry seems to be thinking too—more efficiency in revenue, cost and resource management.

Basically, tighten up the belts. “Our utilisation is about 72-73 per cent right now. Over the next 12 months, we would like to take that to about the 75 per cent mark,” says Vijay P. Khare, Patni’s Chief Delivery Officer.

The other factor that has led to the IT industry’s waning status on the bourses has been the exceptional performance of other sectors like infrastructure, making them more lucrative options.

“It’s true that other sectors have become more attractive. So, it might be an issue of resource allocation. It may sound like an exaggeration but earlier, IT was the only big game in town," says TCS' Mahalingam.

That statement couldn't be truer. Back in 2002, IT was the name of the game (See Slipping slowly below). Nearly 18 IT companies made it to the BT Top 100 list as compared to only 9 this year.

These included companies like Hughes Software (77), MphasiS BFL (66), Mascot (91) and Mastek (95). While some of these companies were acquired, others failed to attain scale and slipped down the rankings.

This year, Mastek is ranked at 400. In fact, that is a problem with the Indian IT industry.the bottom seems to have fallen off most mid-tier players with the exception of a select few like Sasken, MindTree, Rolta, and Cranes Software.

Having said that, is this the end of the "sunrise industry" days for IT? Will a rupee on steroids and a recession in the US garrotte the investor's love affair with the IT stocks?

The industry itself does not believe so. Says Suresh Senapaty, CFO, Wipro: "IT is among the most aggressive sectors when it comes to rewarding its investors, and despite the recent hurdles Wipro and the others continue to be the trendsetters."

Analysts like Suveer Chainani, who is a technology analyst for Macquarie Capital Securities, also says that its premature to write off IT stocks.

"There is too much of unsubstantiated pessimism about the future of the industry,” says Chainani, who feels that the industry’s revenues will continue to grow in the 30-35 per cent range, margins though might come down marginally.

He expects most of the top players like Infosys, TCS, Wipro and Satyam to grow at a robust pace in the future. For example, he expects Infosys' earnings to grow at 28 per cent between FY09 and FY13, even after budgeting for the withdrawal of STPI benefits by the government in 2010. “Top tier IT stocks are cheap right now. In this underperforming market, they do not reflect their true value,” adds Chainani.

Meanwhile, the industry itself is hopeful that growth will be driven by expansion in new geographies and emerging verticals. 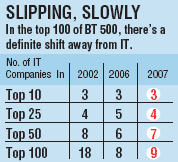 Patni believes that its next level of growth will be driven from geographies like Europe, where it is making a substantial push. “In the telecom services space, we expect geographies like Africa and West Asia to grow substantially,” says Khare. BPO, especially knowledge-driven services, is expected to contribute significantly to the industry’s growth over the next couple of years. However, the subprime crisis bogey seems to hang over the BPO industry.

After several mortgage businesses closed shop in the US, Indian BPO industry fears the same from the banking clients as volumes/transactions have come down dramatically. The Indian BPO market, which is already worried about the long-term impact of the rupee’s appreciation and the mortgage crisis, has to face the threat of a reducing order-book by US companies.

According to Amitabh Chaudhury, CEO & Managing Director of Infosys BPO, the credit crisis might have two kinds of impact on the US economy: “The short-term impact is that the companies would be so focussed on immediate business problems that they will reduce the pace of outsourcing as they might want to just focus on frontend. The second scenario is that it might force companies to outsource faster to cut costs. In the long term, people would be forced to offshore more.”

In all, the indian it industry seems to be facing one too many imponderables that it does not control. a buoyant rupee, a probable recession in the us, the end of a tax holiday, a subprime crisis. and put together, they seem to cast a long shadow over its future. but to write off the industry’s future or its prospects could be a mistake. a mistake that many made during the tech bust of 2001-02.