Talk to an executive director or even a director at ITC and, depending on whom you spoke to, you could come back with the feeling that it is a leading hotels brand, a paperboard and packaging major, or even a fast-moving consumer goods giant making products from branded apparel to snacks.

Buttonhole the chairman, Yogesh Chander Deveshwar, and he could leave you reeling with tales about ITC's "triple bottomline", its determination to serve India and the bottom of the pyramid. His missionary zeal could even fool you into thinking that he is the company's "promoter".

Turn to its shareholding pattern and the story gets confusing. Is ITC "owned" by the government? Government-owned financial institutions hold around 37 per cent. BAT, the British MNC that founded Imperial Tobacco Co. in India in 1910, holds a stake of around 31 per cent. And, there are the shares with the public.

BAT, the owner of brands such as Dunhill and Kent, rarely contradicts Deveshwar's plans for ITC. It was not always like this. "The relationship has been very cordial. Barring that period in 1995/96 [when] there was a period of disquiet… this company almost sank in that period," says Deveshwar, talking of a BAT attempt to takeover ITC in the mid-1990s. (See "My objective and my company's objective is to be future ready" on page 114) When BAT first set foot in Kolkata and set up the Imperial Tobacco in 1910, it staffed the company with graduates from Cambridge. For long, ITC was considered a "white" company.

Things started changing after Ajit Narain Haksar became the first Indian chairman in 1969. (Indian shareholding had begun in 1954.) A year later, the Imperial in the company's name became India, and in 1974, it became plain ITC.


The diversification bug bit ITC in the early 1970s. First came hotels, then paperboard. "Organisations have to reinvent themselves because change is continuous outside," says Deveshwar. Kurush Noshir Grant, executive director, recalls that ITC was pretty well diversified even when he joined it 31 years ago. It was a company with such distribution muscle that the government of India came calling. "We were one of the largest marketers of condoms… basically Nirodh, on behalf of the Government of India," he says.

When ITC first set foot in Kolkata, it had to scout for quality tobacco and was the first to make mass-produced cigarettes. In a marketing coup of sorts, it opened stalls at the Delhi Durbar in 1911 which was held to mark the shift of British India's capital from Calcutta to Delhi. 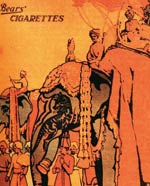 A colourful poster designed for Bear's 'Elephant' brand of cigarettes
But around the same time, ITC also made one of its earliest mistakes: it chose Munger in Bihar, an inhospitable place beset with dacoits, as its first cigarette factory site. That is a thing of the past but, today, tell Grant that ITC is synonymous with cigarettes and his jawline becomes pronounced.

"That's a myth… We are known for foods, for biscuits, for atta, for hotels, for agri, for paper," he says. The diversification in the 'FMCG and others' category has gathered pace but ITC will not disclose profit or loss figures for businesses like biscuits or branded wheat, in which it is giving market leaders a run for their money.

Businesses such as hotels and paperboards, initially separate companies and now divisions of ITC, have grown in size and scale too. In hotels, the high points were hit in the 1990s, when ITC decided to invest heavily. Properties such as the ITC Maratha, ITC Grand Central, ITC Sonar and ITC Gardenia have become examples of how sustainability can be married with luxury, says Nakul Anand, who heads the business.

The paper, paperboards and packaging business, from being a struggling subsidiary, is today a thriving division accounting for a sixth of ITC's revenues. P.V. Dhobale, who joined the ITC board in January, says paperboards and packing "has grown at a compounded annual growth rate of 16 per cent over the past five years, which is probably among the highest in the industry". 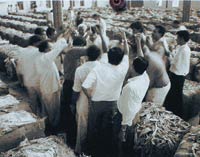 A leaf-buying centre in 1918
It meets almost the entire packaging needs of ITC apart from serving customers such as Nokia. Its 115,000 hectares of social and farm forestry "is as big as Mumbai and Pune put together," says Deveshwar. Elsewhere, in Bangalore, ITC's 55-strong research and development team is working on ideas for its diverse businesses. For example, it is checking out how molecular biology might help improve pulp yields from eucalyptus, the tree on which its social forestry schemes are based.

"We study how genes work and figure out if we can further improve the pulp yield," says C.C. Lakshmanan, Chief Scientist, Research and Technology Innovation. But, ITC under Indian management has also had its share of failures. For example, the current leadership would rather not talk of ITC Classic Finance, its financial services business launched in 1986 and sold to ICICI after it sank. Mention Sundrop, the edible oils business, and ITC executives wince with regret.

Then, there is the echoupal model started in 2000, possibly the only "new" business that has evolved into its third avatar, even though success has been limited. The e-choupals, or Internet-enabled booths linking farmers to market and weather information - and ITC to the produce it needs - spread rapidly till 2008, but have slowed since. ITC's future, says Deveshwar, lies in the "areas of tomorrow". Like food processing, agriculture, paper for education and packaging, tourism and hotels. In these areas, "we are investing heavily," he says. For one of the few institution-controlled companies in India, that is business as usual.