Masters Of the Game

In some of the most critical positions, women are playing it better.
Print Edition: Aug 31, 2014 In some of the most critical positions, women are playing it better.

She took charge of the US central bank on February 3, 2014, for a four-year term. She is the first woman to head the central bank and has written on a variety of macroeconomic issues, while specialising in the causes, mechanisms, and implications of unemployment.

In July 2011, she became the eleventh Managing Director of the IMF, and the first woman to hold that position. She has handled many a crisis and, most recently, dealt with the escalating tensions in Ukraine. In April, she had approved a $17-billion loan for the country. In June 2005, she had joined the French government as the Minister for Foreign Trade.

She was sworn in as the 31st Chair of the SEC on April 10, 2013. She has decades of experience as a federal prosecutor and securities lawyer. As the US Attorney for the Southern District of New York from 1993 to 2002, she specialised in financial institution fraud and terrorism cases.

She was named Yahoo CEO, President and Director in July 2012. She has improved the site's media presence and endeavours to produce original programming. She was earlier vice-president of maps and location services at Google, where she had played a major role for more than 10 years.

She has served as HP's President and CEO since September 2011. She has recently been appointed the chairman of the board of directors. She has been working to reinvent HP ever since she took over as CEO. From 1998 to 2008, Whitman had served as president and CEO of eBay Inc.

She was named President and CEO on October 1, 2006 and assumed the role of Chairman on May 2, 2007. She has directed the company's global strategy for more than a decade and led its restructuring, including the divestiture of its restaurants into the successful YUM! Brands, Inc.

She has been the COO since March 24, 2008 and oversees the firm's business operations, including sales, marketing, business development, legal, human resources, public policy and communications. Under her leadership, Facebook has improved its earnings and scaled up its mobile strategy to tap emerging markets like India.

She is the 28th president of Harvard University and the Lincoln Professor of History in Harvard's Faculty of Arts and Sciences. As president of Harvard, Faust has expanded fi nancial aid to improve access to Harvard College for students of all economic backgrounds and advocated for increased federal funding for scientifi c research.

She is the CEO effective January 15, 2014. She is the first female executive to lead General Motors. Barra hopes to transform GM by regaining customer trust. 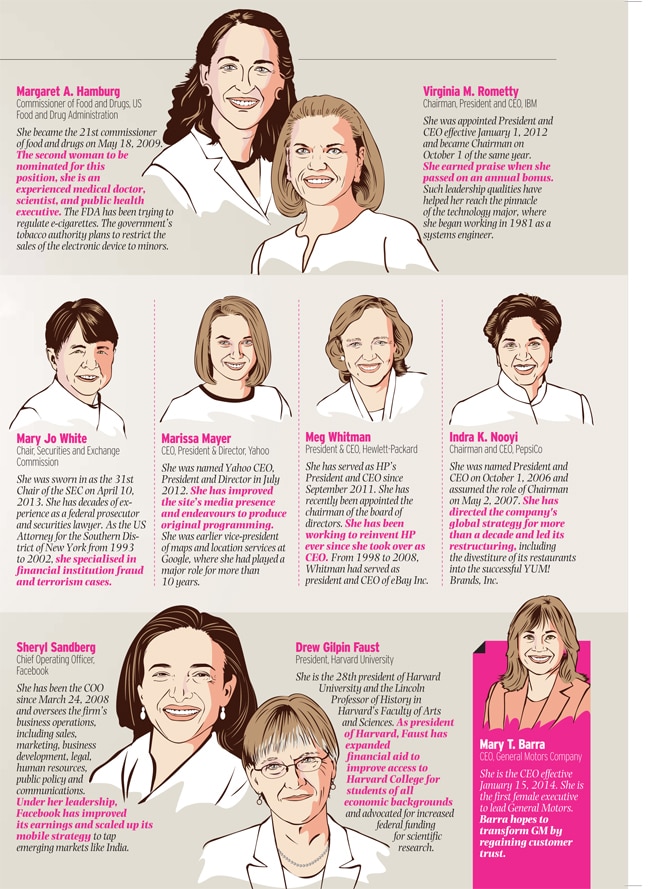 Top 13 most powerful businesswomen in India