He used a combination of timing and talent to build a powerhouse. He’s got plenty going for him. Can he make the big leap to take on mightier competitors? Rachna M. Koppikar tells more.

What’s an Indian wunderkind in financial services doing on a list of Silicon Valley luminaries? After all, there’s not much to compare—certainly not on a scale of achievement, or size, or value. For crying out loud, they’re from totally different sectors, to start with.

If there is a correlation, it’s in the decade of birth. As Malcom Gladwell theorises in his book Outliers, there might just be an age-related pattern that explains why a select few are more successful than most regular folk. Many of the Valley’s software tycoons were born in the mid-fifties. Success, argues Gladwell, may have less to do with individual merit and more to do with people who seized opportunities that presented themselves and—more importantly—“ who happened to come of age at a time when that extraordinary effort was rewarded by the rest of society.”

Their success was not just of their own making. It was a product of the world in which they grew up.

Now that’s a line that’s been resounding in Kotak’s head ever since he finished reading Outliers recently. That he was born in the same decade as the computer legends is coincidental. Kotak’s short point is that after spending 24 years building a solid platform in financial services, with businesses that range from broking, investment banking and mutual funds to insurance, commercial banking and private equity, he’s ideally placed to take the next big leap in the years ahead. He is—to borrow the title of another Gladwell tome—at a tipping point, along with the Indian economy and the financial services sector.

“India today has the ability to define world history. We as people of our generation are at the best point of time in that history. As Gladwell points out in Outliers, those who were the overachievers (in information technology) were at the right age, right time, and took the opportunity. We happen to be in the best country in the world as it looks today. We happen to be in a sector which, at this point of time, plays a crucial role in making this history for India. If you play yourself in a prudent manner, simply and humbly, this is the best place on earth,” says Kotak.

Perhaps financial market mavens of the likes of Vallabh Bhansali (who co-founded Enam Securities in 1984, a year before Kotak took the plunge), Rakesh Jhunjhunwala, Motilal Owsal and Raamdeo Agrawal would enjoy similar pride of place if one had to identify successful entrepreneurs on Dalal Street that belong to the same generation and who are well placed to ride the opportunity at hand. 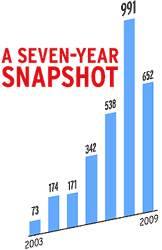 Yet, what sets Kotak apart is his sheer breath of offerings—with a bank at the forefront— which puts him in a great position to appeal to both the saver (which Indians are traditionally) and the investor (which Indians are slowly but surely transforming into). “I’m genuinely a believer that we have the best financial model anywhere on earth,” claims Kotak.

To be sure, that financial model keeps developing new prongs every year. If it was asset reconstruction or private equity in the recent past, the current year will present the 50-year-old entrepreneur with his latest challenge—a national multi-commodity exchange, which will be the country’s fifth.

The group will pick up a stake, as an anchor investor, in the Ahmedabad Commodity Exchange, which will serve as a platform for a national multi-commodity rollout. There’s clearly a huge opportunity here, what with average monthly turnover on the Indian commodity exchanges standing at a whopping $100 billion (roughly Rs 4,80,000 crore), and with one player (MCX) ruling the roost (with close to a 90 per cent market share).

The bigger challenge for Kotak, however, is to make the next leap on the back of the solid base he’s built. For instance, he needs to scale up the bank, which today ranks fifth in terms of deposits and fourth in number of branches amongst the new generation private sector banks (as per data available for the year ended March 31, 2009).

'I have seen people slip up on simple home truths'