As India enters the last year of the Eleventh Five-Year Plan period, it is certain to miss quite a few key targets. Telecom is an exception.

The tribals living in the 171 hamlets of Attapadi, a hilly area receiving high rainfall in Palakkad district of Kerala, had never seriously hoped to see electricity in their huts. But, in February last year, they had a pleasant surprise when power started flowing into their homes. With every household lit up, Palakkad was declared India's first fully-electrified district. But the rest of rural India has a long way to go. The government's goal - Power for All by 2012 - will remain a slogan for a few more years to come.

When the 11th Five-Year Plan began in 2007-08, the government set itself a target of adding 78,577 MW of power capacity by Plan-end, in March 2012. But, at the mid-term review chaired by Prime Minister Manmohan Singh last year, the Ministry of Power admitted that just 62,374 MW would at best be added. By December 2010, it turned out that only 32,032 MW had been added. The shortfall of more than 40 per cent cannot be made up in one year.

The only consolation is that even this "slow" addition is a remarkable achievement going by the government's record during the 10th Plan: just 21,220 MW was added in five years. This time the private sector has also put up an impressive performance by increasing its share in the capacities added from eight per cent in 2007-08 to 25 per cent to 2008-09 to 45 per cent in 2009-10, despite facing several hurdles. 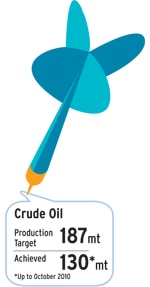 On the ports' front, the Plan's aim was to build 511 million tonne (mt) of new capacity at the 12 major ports of the country: there are six ports each on east and west coasts. The Prime Minister's review showed that actual capacity addition will fall 40 per cent short of the target, because of delays in awarding contracts for building new ports under the public private partnership, or PPP, model.

In contrast, private sector ports have done relatively well. GMR Group's Chief Financial Officer, A. Subba Rao, says there are very few new projects made available to private sector for development. The government, he says, must first identify projects at airports, seaports and highways and award them under the PPP mode.

Next, airports. The Civil Aviation Ministry had not set any number-specific targets, but vague goalposts such as making airport infrastructure world class, driving growth by facilitating affordable air services and flights to remote areas had been mentioned. None of these objectives has been realised. Many airports still get no flights, many others get very little traffic.

Says Rao of the GMR Group: "It is not enough if airports at Chennai and Kolkata are expanded, they need to be maintained as well.'' He says the government should award these two remaining metro airports to the private sector the same way as it did the Mumbai, Delhi, Bangalore, and Hyderabad airports, all of which have been modernised.

The coal mining sector has run into a wall of social and environmental issues. Coal demand was expected to hit 712 mt a year by March 2012, against a domestic production of 591 mt. So the Coal Ministry had set a production target of 680 mt by end-2012. But production remains below 550 mt.

In the crude oil sector, India wanted to pump 187 mt in all in five years by 2012. But the annual production hovers at 35 mt. By March next year, domestic crude production is likely to fall short of target by 30-35 mt.

Two sectors the UPA-II regime has been concerned about are agriculture and manufacturing, both key drivers of employment. It aimed for double-digit growth in manufacturing, but has not been able to sustain it in a consistent way. The global economic maelstrom of 2008-09 turned the sector's prospects upside down. With interest rates now climbing, it is near impossible for the sector to clock doubledigit growth during the Plan period. The farm sector made a promising start with a growth of 4.9 per cent in the first year (2007-08). The next year, growth flattened to 1.6 per cent. In 2009-10, growth was a measly 0.4 per cent.

If the sector has to turn in four per cent growth over the Plan period, it has to grow at seven per cent this year and the next, which appears impossible, at least this year.

At a seminar hosted by the Confederation of Indian Industry in Delhi last year, Gokul Patnaik, Chairman of its Task Force on Agri Marketing, noted that the government needed to step up public investment in agriculture to get four per cent growth out of it. The most important area for investment in agriculture, he said, was related to providing water and ensuring its efficient use.

Even as the UPA-II enters the last leg of the 11th Plan with a report card of red marks, one sector has actually beaten the most optimistic growth expectations. That is telecom. Call it the effect of mobile telephony. The sector effortlessly smashed the five-year target of reaching 600 million connections, two years ahead of schedule, reaching it by February 2010. With 17 million new connections every month, India prides itself today as home to the world's largest telecom network.
TweetYoutube