This is the 11th annual edition of Business Today's Best Companies to Work for in India survey. This year, too, as last year, we partnered with Indicus Analytics to design and conduct the survey, with HR consultancy firm PeopleStrong helping us with questionnaire design and interpret the results.

Any regular, annual survey is a work in progress, with the methodology undergoing minor tweaks each year, as well as major overhauls from time to time. In 2009, we overhauled the methodology of this survey completely to make it one that is "by the employee and for the employee". Last year, we added several facets that sought critical responses from employees: what makes a company attractive to employees, what demoralises them, what upsets them enough to make them contemplate a job change, etc.

This year, we sought employees' views on their companies' whistleblower policies, sexual harassment policies, and adherence to 'green' principles while doing business. The insights gained from the responses have resulted in one of the most comprehensive reports of what the Indian employee thinks of her company.

This year's survey was conducted by Indicus Analytics from September 6 to November 14, 2011, with an online questionnaire, any employee of any company could answer. The Internet as the medium of the survey helped us reach deeper. For the survey, Indicus used its associates' online survey panels (of over five million urban Indian respondents). Mailers and other forms of online communications were sent to over two million randomly-chosen prospective respondents, whose names were on these panels. In all 35,000 visited the survey page and 6,636 filled out the questionnaire. After scrutiny, we had a final reportable sample of 6,176, of which 760 were women.

This year's respondent base is far more dynamic than last year's, even though we have fewer total respondents (last year we had 8,634) and covered fewer cities (323 compared to 350 last year). This year's base is relatively younger and less experienced, and from smaller companies. Indian companies are better represented than this year (4,436 companies against 3,778 last year).

Data authenticity was ensured in two ways. The questionnaire was designed to include built-in verifications that rejected responses with contradictory/incomplete information. We also carried out verification of about 15 per cent of the accepted responses. Rejection was below 10 per cent.

Click here to Enlarge
For the overall rankings, respondents were asked to rank five companies - across industries - that they felt were the best to work in. Next, they were asked to rank the top three companies among these five on each of five specified parameters: career growth prospects, financial compensation, work-life balance, performance evaluation, and other HR practices. The same approach was used to rank companies within sectors, the only difference being that respondents could rank five companies only within their sector, and then rank the top three across the five parameters. 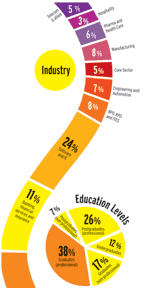 Click here to Enlarge
The overall and sectoral rankings were computed separately, but using the same methodology. Rank 1 has higher weight than Rank 2, and so on. Also, the gap between Rank 1 and Rank 2 was considered more significant than that between Rank 2 and Rank 3, and so on. This difference is implemented by using the 90 per cent rule, wherein Rank 2 gets 90 per cent of the weight of Rank 1, and Rank 3 gets 90 per cent of the weight given to Rank 2, etc. Once rank scores were computed, the top ranked company got an index score of 100 and the scores obtained by the others were indexed to the score of the top ranked company.

What was particularly interesting was the response to the new questions we asked this year. Asked whether they believed their companies promoted ethical conduct and environmentfriendliness, and protected employees from sexual harassment or harassment for whistle blowing, less than 15 per cent recorded any dissatisfaction. In fact, 76 per cent employees are satisfied with their management's attitude to sexual harassment. And surprise, this number is actually higher for women respondents, at 79 per cent.