The attacks came at a time when the economy wasn't in shipshape due to the global credit crisis. Now, the government needs to act decisively to minimise the impact of the terror attacks on the economy. Rishi Joshi and RachnaMonga go into the details.

Following Mumbai’s terror attacks, the chief concern plaguing investors, managers and business owners was this: Can the attacks derail India’s impressive growth story? Fact is, the attacks come at a time when the economy isn’t in shipshape due to the global credit crisis.

Shop floors: Waiting for stimulus
The government is grappling with not just a scarcity of liquidity, but also an increasing risk of delinquencies among individuals and corporates. Moreover, it has had to now divert its attention from the economy to issues of national security. Problem is, with the absence of a well-crafted monetary and fiscal stimulus plan, India runs the risk of plunging deeper into an economic abyss.

Substantial amounts of foreign money that went into the Indian market over the past several years have already been pulled out— FIIs have yanked back $12.5 billion from the Indian market this year, pulling down the Sensex by over 50 per cent. This trend is going to increase, says Jake Stratton, Head (Global Risk Analysis), Control Risks, a consultancy firm. “The attack was unprecedented in terms of international exposure it got.

We have got hundreds of queries from MNCs about the security condition in India. They have many of their people on ground here. There is a short-term shock”. More damagingly, foreign investments in capital expenditure, expansion programmes, and in setting up Indian outposts are expected to slow down. 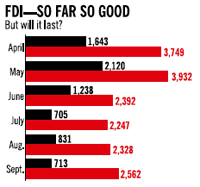 Click here to Enlarge
“Which company would like to put the life of their employees in danger or take the risk of setting up an office in a city which is prone to terrorist attacks?” asks Pradip Shah, Chairman, IndAsia Fund Advisors. The news gets worse. Foreign Direct Investment (FDI)—in the form of car plants or bottling factories— have grown robustly this year. In the first half of 2008-09, FDI clocked $19 billion, against approximately $7 billion for the same period in the previous fiscal year. But the coming months may not be that good. “FDI typically has a lag effect to FII. The healthy FDI into the country this year was expected due to the FII inflows in India last year. The negative sentiment after the terror attacks are likely to reflect in the FII and FDI figures,” says Rishi Sahai, Director, IndusView Advisors, a boutique investment bank.

To compound the country’s economic woes, India’s trade with other countries could also be affected because of the terror attacks. Exports, which have already dropped 12 per cent in the month of October, could take a further dive. Exporters are claiming that their order books have been significantly hit after the recent terror attacks on Mumbai. Says G.K. Gupta, President, Federation of Indian Export Organisations (FIEO): “A lot of buyers, concerned about the security situation in India, have cancelled their trips to the country. This has meant that exporters, particularly the medium and small units, have seen orders drying up. Our loss is now the gain of countries like China and Vietnam as orders are being diverted to them.” According to FIEO, export targets of $200 billion are unlikely to be met. The worst hit are labour-intensive industries like textiles, handicraft and gems and jewellery, which could see substantial job losses as well. Surjit Bhalla
Still, the Mumbai attacks haven’t succeeded in felling everyone’s spirits. Jon Thorn, Director, India Capital Management, a Hong Kong-based investment management company, feels that the morale of outsiders who know India well will remain intact. “Those who don’t know India are certainly very afraid now,” says Thorn, who has been visiting Mumbai for 14 years now, usually stays at the Oberoi, plans on doing so in the future. Similarly, early reactions on Dalal Street to the terror attacks were of defiance, not panic. In fact, key indices were up the next day. This isn’t unusual behaviour. Even when Mumbai—including its stock exchange—was bombed in 1993, and when suburban trains were blown up in July 2006, traders bought stocks as a way of showing that Mumbai couldn’t be so easily cowed. Even globally, point out market men, stock prices rarely plunge in the immediate wake of panic and destruction. 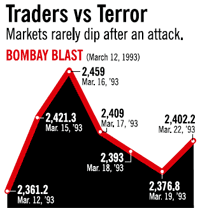 Click here to Enlarge
Ultimately, the timing of the terror attacks with the economic slowdown is an unfortunate double whammy for India. “There will be a short-term impact. Both the global economic slowdown and the terror attacks will reinforce each other to affect the India growth story,” says D.K. Joshi, Principal Economist, CRISIL. However, as Joshi points out, India’s long-term prospects can easily be salvaged. Moreover, terror attacks by themselves don’t necessarily damage economies. “Terrorist attacks, provided they are not a regular feature, don’t hinder business. Countries like Saudi Arabia, Columbia and Indonesia have suffered terrorist attacks in the past but investor confidence in these countries remained strong due to the business opportunities. India is still not seen as a high risk country,” adds Stratton of Credit Risks.Most industry experts agree that for India to recover appropriately— and ensure that the attacks don’t exacerbate an already tenuous economic situation in the long term—the country needs an appropriate policy response. It needs to boost public spending on infrastructure, including roads, power and ports, and pare interest rates further. “Half-hearted measures won’t do. We need an aggressive fiscal and monetary package to sustain high growth rates,” says Surjit Bhalla of Oxus Research.