It was a small buy, but a critical one. On July 15, Pune-headquartered Thermax, a Rs 4,845-crore company that provides products and solutions in heating, cooling, power, water and waste management to core industries like power, steel, and cement, and petrochemicals, informed the Bombay Stock Exchange that it had acquired 33 per cent stake in Pune-based First Energy, a Rs 42-crore (2014 revenues) company. First Energy makes Oorja brand of biomass-based stove and pellet fuel for both home and commercial use.

The deal enhances Thermax's bid to gain strength in the alternative fuel market. "I'm very passionate about alternative energy," says Thermax Chairperson Meher Pudumjee, who professes concern about society and the environment with uncommon zeal. Even before First Energy, Pudumjee has been driving Thermax to move into alternative energy solutions. 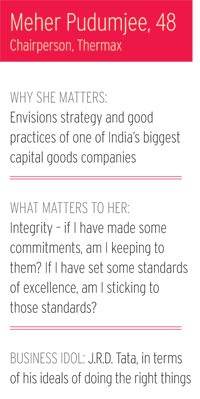 It would be moot to note here that Pudumjee, part of the promoter family of Thermax, is non-executive chairperson of the company. However, promoter shareholding at 61.98 per cent certainly gives her more authority than a professional non-executive with no stake. And she exercises that authority with discretion. "She looks at future strategy -technology, people development," says M.S. Unnikrishnan, Managing Director & CEO of Thermax. "She doesn't get into customer management, but if a customer is facing an issue, she is in the loop."

Pudumjee believes in the ideals of J.R.D. Tata, that every stakeholder - customer, employee, supplier, even government - is important to a company. "It doesn't help your business if there is a lot of illiteracy and poverty around," she says. "Of course, today I would add, thinking about the environment as well (is equally important)."

Says Unnikrishnan, who has worked with her for 18 years: "Meher is an ardent green activist. She wants us to create technologies that will leave the world a better place. We could have grown faster if we had not gone the green way, but she had the guts and the gumption to stick to it."

The main thrust of Thermax's alternative energy business is biomass - that is, boilers and chillers, etc., that are powered by energy produced from biomass. Three years ago, Thermax had set up a wholly owned subsidiary, Thermax Onsite Energy, which makes and runs utilities for companies on their sites. "When we started it, I decided that we would only make it a green company," says Pudumjee. Most of its products and solutions are based on biomass, though Pudumjee has reluctantly allowed a bit of gasbased products to also come in because the economics were not working out.

The biomass foray had begun even earlier, though, in Denmark, when Thermax acquired biomassbased boiler manufacturer Danstoker AS in November 2010 for e29.5 million. The recent acquisition of First Energy, therefore, is key for Thermax. "With First Energy, we are trying to see if we can do business in the B2B (commercial) segment," says Pudumjee. "That would mean looking at hospitals, hotels, etc."

In solar, Pudumjee doesn't want to get in a big way yet. "The largest project we've done is a 1MW project on the rooftop of a company in Chennai," says Pudumjee. Says Unnikrishnan: "She doesn't jump into decisions. She takes extra time to study things in detail. In the time that I have known her, she has never made a mistake."

She doesn't jump into decisions. She takes extra time to study things in detail. In the time that I have known her, she has never made a mistake

However, with global crude prices at a low, there is not much incentive for industries to adopt alternative energy technologies. "Alternative technologies will have to be that much more efficient to give the right payback," says Pudumjee. Already, Danstoker is coping with a slowdown in Russia, its biggest market. The company is now looking at other markets in Europe to make up the deficit.

Pudumjee says the contribution of biomass and alternative energy to Thermax's revenues is around 30 per cent, but even otherwise, overall the company is battling extreme adverse conditions that the capital goods companies are facing. "Its results were good in Q1, but the order book is less than last year - Rs 4,300 crore at Q1 FY '16 compared to Rs 5,200 crore Q1 FY '15," says Shrenij Gujrathi, Senior Equity Research Analyst, Angel Broking. Gujrathi expects the company to rake in orders of Rs 800-900 crore each quarter over the next two quarters, below its average of Rs 1,000 crore. Things seem slightly brighter over a longer period. "Our two-three year view is that Thermax will benefit from the recovery in private sector capex," says Amit Mahavar, Senior Analyst (Industrials), Edelweiss Finance. "However, weak revenue growth visibility remains a near term challenge for the management."

Challenging times? Certainly. But you can expect Meher Pudumjee to dig in deep.

How Anuradha Desai is expanding her poultry biz