After years of delay, the university has begun operating out of a small campus near the ruins of the old school and will have a partial launch next year. 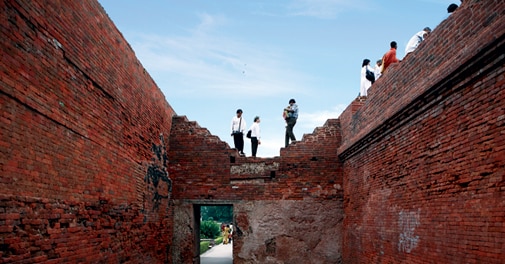 The ruins at Nalanda. The new university is nearby Photo: Shekhar Ghosh/www.indiatodayimages.com

It was one of the world's leading universities long before Harvard and Cambridge were set up. At its peak, Nalanda was a centre of excellence not just for philosophy and Buddhist studies but also for literature and mathematics. Today, about 800 years after it was razed by invaders, a group of scholars led by Nobel laureate Amartya Sen is reviving the ancient university in Bihar as part of a wider Asian renaissance. Sen says he had always dreamt of resurrecting the ancient university.

"Since my childhood, Nalanda had a big presence in my life. I was around 10 or 11 when my grandfather took me to Nalanda for the first time and I was completely bowled over by the vision it offered to humanity," he says. "It is very inspiring to have the campus close to the ruins. I have been there some 20 times and at every visit I've been inspired even more."

The university will spend more than Rs 2,700 crore to set up seven schools with a total staff of 500, including 307 academics.

Sen is likely to realise his dream soon. After years of delay, the university has begun operating out of a small campus near the ruins of the old school and will have a partial launch next year. The ambitious 455-acre campus in Bihar's Rajgir town will be completed by 2021/22. The new university aims to rebuild the intellectual rigour of the old Nalanda through a multi-disciplinary curriculum that includes the humanities, economics, Asian integration studies and sustainable development. The university will spend more than Rs 2,700 crore to set up seven schools with a staff of 500, 307 of them academics.

Each school will have 300 post graduate students and 50 research scholars. Gopa Sabharwal, Vice Chancellor of Nalanda, says the biggest challenge is to establish a 21st century university while maintaining the heritage of its predecessor. "The reconciliation of the historic with the contemporary is being done at many levels and in many ways - in the physical structure, in the ideas that guide the choice of the schools, the curriculum's focus areas and so forth. Hence interdisciplinarity, inter-Asian linkages and a connection with the immediate surroundings are the guiding principles of the university," she says.

For Sen, the revival of Nalanda is neither part of any nationalist agenda nor a symbolic gesture. He believes the resurrection of the university will provide a chance for the East to reclaim its great academic traditions. Nalanda was a great centre of learning in Asia for more than 800 years. The flourishing residential university had more than 10,000 students and 2,000 teachers not just from Asia, but also Greece. Chinese scholar Xuanzang spent nearly 15 years at the university. But Nalanda was destroyed around the end of the 12th century at the same time as the great universities of the Western world began emerging, marking a shift in knowledge from the East to the West. "Nalanda will be central to our relationship between our past, which will be next to us, and our future, which will be based on the tradition of advancing uncompromising highquality education," says Sen.

The idea of reviving the university was first mooted in 2005/06 by the then president A.P.J. Abdul Kalam. Bihar Chief Minister Nitish Kumar took a shine to the project and gave it a more international direction. The Indian government proposed the idea to revive Nalanda at the 2007 East Asian Summit and a team headed by Sen with representatives from Singapore, China, Thailand and Japan was set up. The university was finally established through an act of Parliament in 2010.

Anupam Ray, Joint Secretary, Ministry of External Affairs, which is overseeing the project, says the ministry sees the university as a unique opportunity to revive India's standing as an Asian power. "India is an emerging power, and this is the Asian century re-energised by a dynamic entrepreneurial and innovative culture. There is a shift in the centre of gravity and we are one of the foremost Asian nations with a classical civilisation with Nalanda as one of the great hubs of this civilisation," says Ray.

India has teamed up with both governments and universities abroad to help get Nalanda off the ground. Apart from preliminary tie-ups with Australia, Singapore and New Zealand, China has contributed $1 million for a China floor in the library and Thailand has given $100,000 to help set up the university. Singapore has offered to build the library and Japan will help improve infrastructure around the university by renovating the highways near the campus.

Sen says the university is also looking for support from businesses in Asia. "Businesses in Asia are rich and enlightened. We welcome the cooperation of business houses in this unique endeavour. Also, India has had a great tradition in this respect, where corporate houses have supported academic initiatives and we look forward for their support to Nalanda." Ray says the government is committed to provide funding for 10 years but the ministry will not run Nalanda. 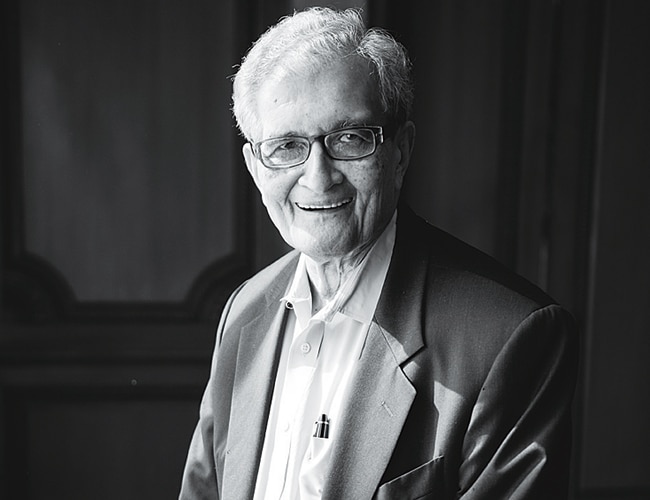 Nalanda will be central to our relationship between our past, which will be next to us, and our future, which will be based on the tradition of advancing uncompromising high-quality education: Amartya Sen Photo: Aditya Kapoor/www.indiatodayimages.com
In some ways, the revival of Nalanda is seen as the revival of Bihar. The state government plans to extend the momentum created by the university by developing an IT park, a world-class convention centre, an international airport and state-of-the-art hospitals. It has already committed an additional 100 acres of land as an endowment for the university. Former Singapore Foreign Minister George Yeo, who is on the university board, says the new Nalanda should be supported by the people living around it like the old Nalanda. "The rebirth of Nalanda is part of the rebirth of Bihar; its development must bring development to the people living around it," he says. "For the first two schools, Historical Studies and Ecological Studies, we have this very much in mind, including instilling a greater sense of history, improving agriculture and providing better toilet facilities."

Experts say rebuilding the university will help revive India's global role. "Nalanda's revival means the revival of the Asian Solidarity concept and India's prominent role in it. This will reinforce South Asia's historical links with Southeast Asia," says S.D. Muni, visiting Research Professor at the Institute of South Asian Studies, National University of Singapore. "If Asia has to rise again, its economic growth and political stability have to be backed by intellectual vigour. Nalanda offers a promise in that direction."

How Microfinance industry is bouncing back