Winning the small car project only highlights Narendra Modi’s success in marketing Gujarat— and himself. 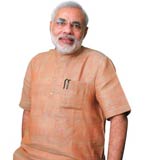 Gujarat CM Modi
The good M, as TATA group chairman Ratan Tata dubbed Gujarat Chief Minister Narendra Modi after finalising the deal to relocate the Nano car project at Sanand, dismisses all allusions to him being the “CEO” of Gujarat. “I don’t agree with this concept of a Chief Minister being a CEO because to a CEO, his own interests are paramount. But I’m a trustee (of the state’s interests),” he says. The moniker, though, is well deserved. A recent study by the Reserve Bank of India shows that the state received investment proposals of Rs 62,442 crore, 22 per cent of the total investments in the country, up to March 2008. So, what is Gujarat’s USP, or rather, and more importantly, what does Gujarat sell that others don’t?

To many investors, it is simply the image of the chief minister as a nononsense administrator who delivers on his promises. “An investor looks for the security of his investment and we have a track record of minimal labour trouble and man-day losses. If someone gets good—and proactive—governance, it’s but natural that money will flow in,” reasons Modi, who has governed the state with an iron hand for the past seven years, and delivered, during this period, astonishing results on both development and industrialisation.

But the journey to the top hasn’t been easy. Battered and shattered by the earthquake in Bhuj in 2001, Gujarat was barely recovering when Godhra—and the devastating riots that followed—took place in 2002. “Look, we can keep harking back to those days or we can move on and I choose not to get stuck in time,” Modi says. And move on he did, concentrating on industrial and infrastructural development by appealing to the sentiments of the Gujarati diaspora through the biennial Vibrant Gujarat conclaves. His favourite selling lines: trade with tradition, commerce with culture and entrepreneurship with entertainment.

Today, as he promotes the concept of ‘rurban’ (rural and urban) culture—providing urban amenities in rural areas, such as 24-hour 3-phase uninterrupted power supply and broadband connectivity—Modi sits easy, as even his detractors are buying his story.

It was the then Thermax Chairperson Anu Aga who had criticised Modi at a CII conclave for his handling of the post-Godhra riots. Today, that very company is investing Rs 450 crore on its new plant at Vadodara.

Obviously, Modi the marketer has managed to wipe out some of the taint that had sullied his, and his state’s, reputation six years ago.