Rahul Gandhi’s influence on economic policies will grow in UPA’s second term. Here’s what it means to the economy and business. Puja Mehra goes into the details.

Sure, it seems like a premature question to ask: What is Rahul Gandhi’s role in India’s economic policy? After all, Rahul hasn’t even once spoken on economic policy and hasn’t even been a minister. But as the UPA starts its second term, this question acquires some immediacy. Here’s an anecdote to prove it: In the second half of 2007, a debate was on within the UPA government and outside on what to do with the NREGS. The scheme was then applicable in only 330 districts. There were mixed reports on its efficacy. Those concerned over inefficiency of public spending—former Finance Minister P. Chidambaram amongst them—were opposed to expanding the scheme till a better assessment of costs and benefits could be had. Others wanted its immediate extension. Rahul Gandhi met the Prime Minister with a delegation in September 2007 to appeal for implementing the NREGS all over the country. In less than 50 hours, that’s exactly what the government did. This was the UPA’s biggest item of social spending with far-reaching implications on fiscal management. 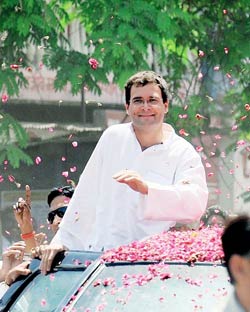 What is Rahul Gandhi’s role in India’s economic policy?
Call it intervention of a Youth Congress leader, or a well-meaning submission of a fourth generation Gandhi who was only applying his understanding of development economics that he studied at Cambridge. Whatever may be the reason for Rahul’s intervention, the fact that it impacted the future of the NREGS and fortunes of the government’s finances demonstrates the influence that he has—and can have—on economic management. Yet, there is no reason to start imagining his invisible hand in the key economic decisions of the UPA. Not as yet, anyway. A more subtle and sporadic influence is more likely. And that will be guided by practical, on-the-ground considerations than any rigid economic ideology. That’s not a bad prospect for an economy reeling from the hangover of an overdose of the Left’s ideological interferences. Rahul as an influencer with an open mind and pragmatic approach would be a welcome break.

Rahul—or RG as he is now called—is a patient worker. He doesn’t want to spin the same old wheels. For instance, he rarely asked questions in Parliament because unlike most questions asked he only likes to ask a question that leads to action.

Yet, in some ways he is a disruptor, too. He wants things transformed. Including the system he’s an outcome of—the sychophancy-ridden Congress party’s deficiency of democracy. And in the past six years, he worked on it one step at a time. Ashok Tanwar, President of the Indian Youth Congress (IYC), had told BT before the polls: “First, he started with a membership drive for the IYC. Next, he kicked off its democratisation with elections for office-bearers.

Congressmen older than 35 years old are now feeling the pinch as many more youngsters will win elections.” Thankfully, at least so far, he doesn’t believe in making tall promises—a very un-politician-like conduct. A few young MPs who have interacted with him closely say he advised them not be to a demagogue. “Rahul Gandhi doesn’t allow us to offer lofty promises to the electorate,” says Manicka Tagore, a first-time MP from Virudhunagar, Tamil Nadu. He would like to give participatory development a try—each village should solve its own problems. He promises to work with the people on getting the problem solved.

Basically, what Rahul—an M. Phil in Development Economics from Trinity College, Cambridge University—is toying with is the decentralisation of decision making and self-governance by the people, with the role of politicians and bureaucracy confined to facilitation. If he does believe in removing middlemen and empowering people, he must trust market forces, too. At a press conference, he did say that Bharat cannot be taken care of unless India grows —and grows fast. This goes back to the debate India’s development economists have had since the days of Jawaharlal Nehru. Should we grow fast or should we grow equally—albeit slowly? For much of Congress’s history, proponents of equal growth have had an upper hand over those advocating faster and more efficient growth.

By supporting the NREGS, Rahul has demonstrated that he is on the side of equality. But that doesn’t mean he is anti-growth. Unlike the previous three generations of the Gandhis, Rahul has stepped into politics in a starkly different economy. Today, it is easier to be— and to be seen as—pro-poor without being anti-rich. In being so Rahul has the chance of redefining Nehruvian socialism to modern-day needs. He has taken the first and firm steps in that direction.

Bulls back the right horse