Everest Kanto isn’t just the second-largest player globally in its sector, it also has the most varied product range. 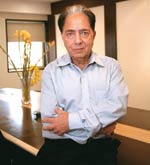 P.K. Khurana
Last April, when the US was in the throes of the sub-prime crisis, Everest Kanto Cylinder (EKC) acquired US-based CP Industries for $64.25 million. Analysts didn’t approve of the timing of the deal. Nine months later, however, EKC claims to have no regrets—sales from the US have picked up in the last six months, never mind the recession that’s ravaging that country.

Says CMD P.K. Khurana: “Our products from the US are for a niche market and not every manufacturer can make such cylinders,” he says. That may explain where most of the growth in the past two quarters came from— the US and a new plant that started in China.

EKC’s biggest competitive edge, though, is that it’s perhaps the only company that produces such a varied range of cylinders with multiple capacities, from 1 kg upto jumbo sized cylinders. The company claims to be #2 in the world—after Faber of Italy—in capacity. Also, as Khurana, who began his career by trading in cylinders, reiterates: “We make cylinders that nobody else in the world does.”

For this 30-year-old company, for a long time a large portion of its revenues came from CNG cylinders that were used mainly in the automobile industry. But taking into account the cyclical nature of that sector, EKC spread its wings into industrial cylinders, targeting sectors like cement, steel and chemicals.

Analysts have revised EKC’s profit estimates for the next year downwards by 29 per cent, mainly because of weak demand from the auto sector in India and China. That’s not deterring EKC from going in for capacity expansion— from 1.1 million to 1.6 million cylinders—which will become operational by June-July. When you’re one of the world’s few players in a niche area, you can afford to fire on all cylinders.

In a niche of its own