Calcined petroleum coke may sound esoteric, but not for Rain Commodities, which has emerged as the world’s largest producer of this raw material. 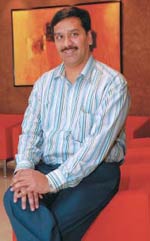 RCL’s Rao
It took just one acquisition for the Hyderabad-headquartered Rain Commodities Ltd (RCL) to make the move from Asia’s largest to become the world’s largest player in calcined petroleum coke (CPC). CPC is a critical raw material that is needed to make aluminium and titanium dioxide. In July 2007, RCL bought CII Carbon LLC of the US for $595 million. At a stroke, its market share climbed from 3-4 per cent in the important and organised western market to 14-16 per cent. “We became four times larger. From a total production capacity of just 0.6 million metric tonnes per annum, we reached over 2.4 million metric tonnes with this acquisition,” says T. Srinivasa Rao, Vice President (Finance), RCL.

The game-changing nature of this acquisition is evident in RCL’s top-line itself—roughly half of its total consolidated revenues of Rs 4,561 crore in 2008 came from the US company. “It has added to the top-line, bottom line and we have become a stable player because of this,” says Rao. On annualised basis—the company changed its accounting year from April-March to January-December in 2008—net profit on a consolidated basis was up almost four times to Rs 404 crore in 2008 from Rs 104 crore a year ago.

RCL financed the acquisition via loans from Citibank and ICICI Bank. The loans are repayable by 2014-15, giving the company enough headroom to generate cash flows. In 2008, RCL generated Rs 510 crore in cash after tax and expects to maintain a similar trend in 2009. Out of a total long-term loan of $535 million (the balance in the $595 million deal is the equity component of $60 million from the company), it has already paid back $21 million to the lender banks till December 2008. Over the next four years, it will be paying $128 million ($32 million per year) and between 2013 and 2015 the remaining $386 million. Rao adds that apart from size and scale, another big benefit of the buyout of CII Carbon is the synergy being derived, which has resulted in savings of “millions of dollars”.

What’s more, RCL has been able to secure an assured supply of the raw material—anode grade green petroleum coke—which was in short supply at the time of acquisition. The other benefits include long-term relationships with CII Carbon’s suppliers as well as a diversified customer base that is spread across the western world. The acquisition also brings to the table CII Carbon’s proprietary technical know-how, which is being used to optimise the performance of RCL’s India operations. For instance, one of its technologies has helped reduce fuel consumption in the kilns by 50-60 per cent, implying savings of $2 million annually just by using a single technology. This is not a bad going for RCL, which, before the acquisition of CII Carbon, was perhaps better known as a cement manufacturer, with the brand name Priya Cement.