Last year, only Unitech made it to the top 100 list. Several real estate companies have listed on the exchanges since then. Backed by apparently endless investor appetite, these companies gained sharply in the market capitalisation sweepstakes, but is this appreciation durable?

Last fortnight, Kolte-Patil Developers was inviting bids for its initial public offering. Given its target of raising about Rs 250 crore, the Pune-based developer seemed to be looking for what seems small change for the Indian capital markets, which generously gave over Rs 17,000 crore to numerous real estate companies over the last year. 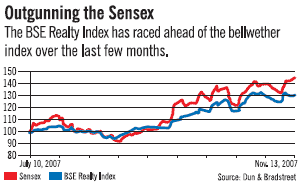 According to consulting firm, Ernst & Young, 18 real estate and construction companies which listed between August 2006 and August 2007 raised over $4.36 billion (Rs 17,440 crore) from the public.

Given the structural changes in the sector, consistent demand and positive investor sentiment, it was no surprise that many of these companies made their presence felt in BT’s annual ranking of India’s 500 largest companies by market capitalisation.

Several made it to the Top 100; and the star of the show was undoubtedy DLF, which had attracted adverse media coverage before the public issue due to its aggressive pricing.

That is history now. With Indian stocks attracting free-floating global capital by the spadefuls, the DLF issue, too, was oversubscribed, mostly by institutional investors. After the IPO, the group, as the largest player in the sector, subsequently raised a little under $1 billion (Rs 4,000 crore) through group company, DLF Assets (DAL) and other special purpose vehicles. Other real estate companies are not far behind.

Unitech, the lone entry in Top 100 last year, improved its ranking from 32 to 14 due to strong investor demand. No wonder then that real estate captured more than a quarter of the $10 billion (Rs 40,000 crore) of private equity that came to India this year.

Emaar-MGF, the joint venture between the Dubai-based Emaar Group and Indian developer MGF, too, is in queue for a mega public offer.

The frenzy is captured by the rise of the 14-stock BSE Realty Index, which was launched in July this year. From the lows of August when the unravelling subprime crisis in the US scared investors, the BSE Realty Index has consistently outperformed the broad benchmark Sensex. That has also been in evidence in the recent past as captured by BT 500 rankings.

What is driving this enormous investor appetite? Economic growth lapping 9 per cent has spurred demand for office space, retail outlets and hotels.

And even as the Special Economic Zones get planned and executed, it is the coming together of rising demand in diverse segments that is driving demand. (See Strong Demand) Typically, real estate grows 2-3 times the GDP growth of a country. So, it is no exaggeration when JP Morgan forecasts the industry size to grow from $50 billion (Rs 2,00,000 crore) per annum at present to $90 billion (Rs 3,60,000 crore) by 2010-11, showing a growth rate of 13 per cent over the period. A few years ago, the IT and ITES sector was the main engine that fuelled real estate growth.

Though the sector retains its importance as it is still growing at over 30 per cent per annum, new drivers have emerged in the form of the financial services, retail and media sectors.

Developers, hence, are not too worried about the impact of the US recession and the strengthening rupee on demand for offices. Changing demographics, rapid urbanisation and easily available home finance strengthen demand for residential real estate.

Booming economy also plays a role in the retail and hospitality segments. And investment yields of Indian offices and retail spaces are comparable to most cities in the world.

Kaushal Sampat, Chief Operating Officer of financial data services firm, Dun & Bradstreet, says: “The demand drivers for real estate are on a firm footing. To satiate this demand, the sector will require continuous capital infusion.” And with demand showing strength, Sampat does not see any let-up in investor interest in the next 3-5 years.

If the projected scale-up does take place, then the Indian real estate industry is in for a super build-up in volumes. But despite the rosy projections, there are significant challenges in delivering on these promises.

For one, the global macro-economic financial environment could affect flows into this sector. Another is the restrictive policy environment that is trying to keep a lid on runaway prices by restricting bank and foreign debt for real estate and keeping it expensive.

Rising construction costs (up by over 15-20 per cent in one year), coupled with declining availability of trained manpower, will also put pressure on margins.

Against this backdrop, execution is likely to be the single-most important risk going forward. Some delays have already been reported in the market. However, as many of these real estate companies complete their first few quarters as listed entities, the pressure to deliver on promises of mega-developments will intensify.

J.C. Sharma, MD, Sobha Developers, points out that the enormous expectations overlook critical factors about the capability of real estate companies to launch projects in right locations, execute and then market the products. "All assumptions are being made on the basis of projects materialising as planned whereas in reality, past track record is almost nothing," he says.

"At least some part of the premium that real estate companies are getting can be attributed to the paucity of investment options," says Sanjay Verma, Executive Managing Director, South Asia, Cushman & Wakefield.

He adds that most of the premium is actually being paid on the expectation of future cash flows, and often, the valuation play is on the size of the unencumbered land available with the developer.

Last year, the contribution of real estate sector to India?fs total stock market capitalisation was less than 1 per cent. Though the public offers have improved the figure to 4-5 per cent, this is still way short of the norm in the developed markets.

Analysts believe that over time Indian developers, too, will emerge as macro-economic plays on economic growth. "The real estate industry is still at a nascent stage as far as the capital markets are concerned," says Saurabh Chawla, Senior Vice President, Finance, DLF.

However, the transparency and disclosures that will be needed in the interim will be of a higher standard. "Investor differentiation is already visible in terms of prices that the developers are getting," says R. Nagaraju, General Manager, Corporate Planning & Strategy, Unitech.

A trend to notice in almost all the real estate companies is that few investors are willing to take a risk at the enterprise level. Most investments are flowing into special purpose vehicles. At the macro-economic level, despite the massive build-up in real estate, if the supporting infrastructure does not come up as desired, we may well see demand.the predicator of the current boom.disappear.

That apart, Parsvnath Developers' Pradeep Jain says that the "value creation by the real estate sector has just started. Nobody can estimate what is possible by past performance." Jain believes that given the opportunity available for long-term value creation, the real estate sector is quite underpriced currently. Many of his peers in the industry and investors are hoping that is true. Only time will tell whether that is really so.